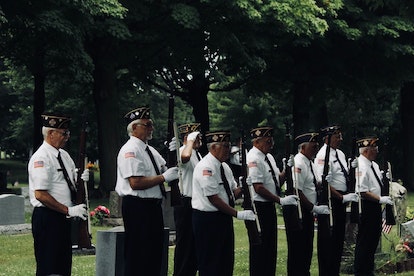 The United States military practices many traditions to honor important figures both living and dead. The 21 gun salute is one of the more well-known. Even if you’ve never seen an official 21 gun salute in person, there’s a good chance you’ve seen depictions of this tradition in movies or TV.

However, while many people know the 21 gun salute exists, they may not exactly know why it’s significant. The origins of this honor date back centuries. It’s become such an ingrained practice that few ever stop to explain what it means.

This guide will clarify the topic. If you’d like to better understand the purpose of the 21 gun salute, keep reading!

Before covering the 21 gun salute’s origins and symbolic meaning, it’s worth noting that many misconceptions surround this tradition. This blog will cover them shortly. Just keep in mind that much of what people think they know about the 21 gun salute is actually false or oversimplified.

You may be surprised to learn that, to some degree, the origins of a 21 gun salute actually predate the existence of guns. Throughout human history, warriors, soldiers, and others who engaged in combat have demonstrated to potential opponents that their weapons were no longer effective. They did this to indicate they meant no harm. Sometimes this was because they were surrendering. Sometimes it was to show previous foes they came in peace.

This practice of throwing down one’s sword continued with the development of guns and cannons. Early firearms could only fire one shot at a time. Reloading them was a cumbersome process. Thus, the crew of ships approaching friendly ports would often fire all their weapons first. This signaled to anyone watching that they didn’t pose a threat.

It also left them entirely vulnerable to attack. This is the crux of the 21 gun salute and why it became a traditional honor. It demonstrates a willingness to be vulnerable and thus complete trust.

Researchers believe there are several potential reasons the military uses 21 guns when saluting important figures. One is that many ancient cultures considered odd numbers to be lucky. This influenced traditions similar to the 21 gun salute.

Additionally, the US Navy set forth the first official gun salute regulations in 1818, stating, “When the President shall visit a ship of the United States’ Navy, he is to be saluted with 21 guns.” This is significant because there were 21 states in the Union in 1818. When gun salutes first became common in the US, they typically involved 13 guns symbolizing the country’s 13 colonies.

The US, however, isn’t the only country to use 21 guns. For example, as far back as 1730, the British Royal Navy recommended 21 gun salutes on special anniversaries and events. Unlike the US Navy, the Royal Navy didn’t officially require the use of 21 guns (nor did it require performing 21 gun salutes at all), but this does show the 21 gun salute didn’t start solely because the US had 21 states when the Navy established its regulations.

Gun salutes are not exclusive to the US. Other countries have similar traditions. The specific locations where others practice gun salutes varies on a case-by-case basis.

In the United States, 21 gun salutes typically occur at military installations. This can include military schools and training centers. They also take place at ports to mark the arrival of an important foreign figure if the location allows for it. Twenty-one gun salutes at sea also occur.

For instance, during an Independence Day cruise, it’s not uncommon for the crew of the USS Constitution to deliver a 21 gun salute from its decks as it turns around at Fort Independence. Spectators often watch from land to see what a historically-accurate 21 gun salute looks like.

What Happens During a 21 Gun Salute?

Some military experts don’t consider this process to qualify as a 21 gun salute. Firing three rounds of shots makes it more akin to the three-volley salute (described in the next section). Because traditional 21 gun salutes actually involved cannons, some believe an official salute must still involve cannons.

Not everyone is as strict about this issue. Many 21 gun salutes involve firing parties using rifles such as the M1 Garand, M1903, or M14.

You may know that a gun salute, like military flag presentations, is often an element of military funerals. However, the idea that this is an official 21 gun salute is actually a misconception. The shots fired at military funerals are technically the three-volley salute. That’s the more appropriate thing to do when a veteran dies.

Gun salutes don’t always involve 21 shots. The official regulations establish a hierarchy depending on a person’s status or rank. Someone who doesn’t qualify for a 21 gun salute may still receive a gun salute consisting of fewer shots. Regardless, the number of shots will always be odd.

The US reserves the official 21 gun salute for certain figures and events. Figures who receive the honor include visiting heads of state, members of currently reigning royal families, the current president, the president-elect, and ex-presidents. A 21 gun salute typically occurs during a president or ex-president’s funeral, but it can also occur any time they make a relevant appearance. Some 21 gun salutes serve to honor a national flag.

The 21 gun salute (or variations of it) often shows up in movies, TV, and literature. The following are a few noteworthy examples. They clearly indicate this is a tradition many naturally understand, even if they don’t know much about its precise origins or meaning.

You Only Live Twice

James Bond qualifies as someone deserving of a 21 gun salute. His character (thought to be dead) receives one at the start of this film.

Although plenty of movies feature 21 gun salutes, this one is worth mentioning because it reminds us that the US is not the only country where gun salutes are common. The salute in the movie also occurs at sea, rooting the scene in the 21 gun salute’s traditional origins.

The 21 gun salute is such a well-known honor that even the Harry Potter series includes it in modified form. This occurs when (spoilers ahead!) the centaurs that live in the wooded areas near Hogwarts fire a volley of arrows to mark Dumbledore’s funeral.

An episode of TV’s The West Wing featured a particularly moving depiction of a gun salute for a homeless Korean war veteran.

The Pentagon even granted the crew permission to film the scene at Arlington National Cemetery, which rarely happens. That said, because the salute was to honor a veteran and not a figure like a president or foreign dignitary, this would technically qualify as a three-volley salute.

21 Guns: Honoring the Past and the Present

The 21 gun salute isn’t a new tradition. On the contrary, nations throughout history have practiced some version of it to honor important people and events. Its original purpose of showing someone you don’t pose a threat may no longer be relevant, but as a symbolic gesture, it lives on.

If you want to learn more about military funerals, read our guide on Navy funeral honors.