In many traditions around the world, the memorial of a loved one doesn’t end after the funeral. While the memorial service is the last chance to say goodbye to the deceased in many cultures and religions, some believe the mourning process lasts for 40 days.

(If the meaning of the 40-day mark after a death is just one of your post-loss questions, our post-loss checklist can help you navigate the rest.)

There is a belief that the soul continues to wander the Earth for another 40 days after the initial death. While wandering, the soul visits significant places from their life as well as their fresh grave.

At the end of the 40 days, the soul finally departs from this world. Many families choose to host another celebration on this 40th-day mark. In this guide, we’ll explore the significance of the 40 days after death.

Tip: If you're attending a 40 day after death celebration for a loved one, make sure you bring a culturally-appropriate gift or card. Most times, a meat and cheese snack tray or a dried fruit and nut basket will do the trick but check with the family before you purchase your gift.

History of 40 Days After Death 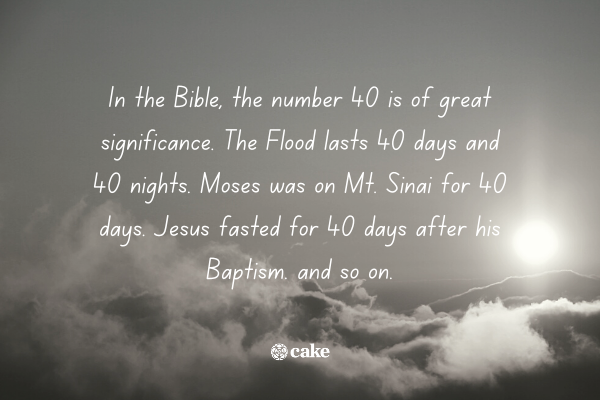 If you’re not from a tradition that practices the 40th-day memorial after death, you might wonder where it came from. The answer lies in the Bible. In the Bible, the number 40 is of great significance. The Flood lasts 40 days and 40 nights. Moses was on Mt. Sinai for 40 days. Jesus fasted for 40 days after his Baptism. and so on.

Those from Eastern Orthodox traditions use this framework for their own memorials. In Russian funerals, this 40 number also relates to pagan traditions. The 40 days is an opportunity for judgment before God.

It’s believed in Eastern Orthodox religions that the soul completes many obstacles known as the aerial toll houses. The soul passes through the aerial realm, which is home to evil spirits. These spirits attempt to drag the soul into hell, and the soul needs to find the strength to stay with God. This is a judgment of the soul’s sins. At the end of the 40 days, the soul finds its place in the afterlife.

Modern Traditions and Practices in Each Religion

Like most funeral practices, no two cultures have the same beliefs. Let’s take a closer look at modern traditions and practices for each religion.

The Roman Catholic doctrine rejects the 40th-day belief, despite this belief being so widespread in other sects of Catholicism. According to Roman Catholic beliefs, judgment occurs at the time of death. The soul will either travel directly to Heaven, Purgatory, or Hell. There are no toll houses or evil spirits.

In Roman Catholic tradition, the soul does not wander the Earth for any period of time. That being said, Catholicism mixed with local cultures and customs around the world to create the 40th-day tradition that is still in practice today. 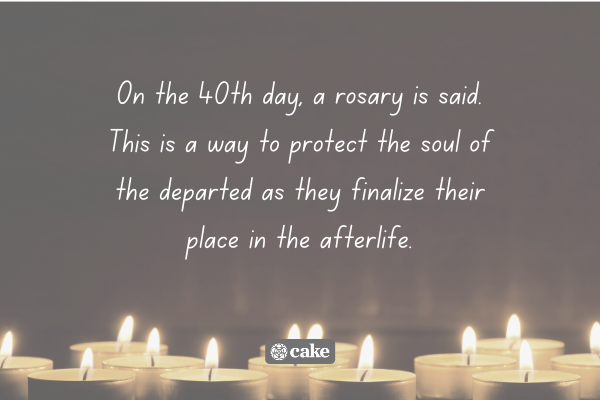 In Filipino Catholicism, the 9th and 40th days are significant after the death of a loved one. For 9 days after the death, the family recites prayers. In Filipino tradition, the name for this is “pasiyam” which means “that which is done for 9 days.”

Where did these beliefs come from, especially considering how many Catholics don’t believe in the 40th-day tradition? Because the Spanish colonized the Philippines, there was a lot of mixing of beliefs and traditions. Today, most Filipino families follow Catholic funeral traditions.

According to ancient beliefs, the deceased’s soul stays on Earth for up to 9 days after the death. During this time, the family gathers for prayers and a celebratory meal in honor of the deceased. On the 40th day, a rosary is said. This is a way to protect the soul of the departed as they finalize their place in the afterlife. All of these traditions are a way to help with mourning the loss of a loved one and you'll see them displayed at some Filipino funerals.

The Russian-Orthodox tradition has strict beliefs around the days following a death. It is important for memorial prayers to be said on the 1st, 3rd, 9th, and 40th days after the death of a loved one. It’s also tradition to host a memorial on every anniversary of the family member’s death. Why are these numbers significant for Russians in particular?

In the Russian funeral tradition, families gather on these days to say prayers and enjoy a meal. Families enjoy a delicacy known as kolyva. This is a dish made of fruit and wheat. It’s often decorated with sweets and other local favorites.

Because many Russian traditions have their basis in folk traditions, other unique practices go along with the 40th day tradition. First, candles are placed in the koylva, then blessed before meals. Next, the family leaves a towel and a cup of water by the window. This is because the deceased’s soul visits the home during the 40 days, and this gives them a space to rest. At the end of the mourning period, the family shakes the towel into the cemetery to release the soul from the home.

Finally, the family places bread and a glass of water in front of religious icons to help ancestors remember the deceased. The family replenishes this bread and water over the full 40 days. After this period of mourning is over, the family no longer visits the loved one’s grave. Though these traditions might sound unusual, they’re a way of bringing the family peace and comfort in a time of need.

Greek-Orthodox memorial services are similar to other Orthodox sects. The mourning process is strict in this tradition. The family will avoid social gatherings for at least 40 days after the passing of a loved one. During this time, the family wears all black. Close male relatives don’t shave for 40 days.

Throughout the mourning period, friends and family will bring flowers to the grave. The gravesite is cleaned and kept in perfect condition. Again, this is a way to show respect as the soul transitions to the afterlife.

There is a memorial service hosted close to the 40th day after death. This will be hosted on a Sunday, likely during mass. Many families in the Greek-Orthodox traditional also hold a “Trisagion Service.” This is a brief service performed by a priest specifically for a person who died. The family goes with the priest to perform this ceremony at the gravesite.

Many modern Greek-Orthodox individuals believe the soul lingers on Earth until the 40th day. Others simply believe it’s important to pay respects to the dead on these historic days. Either way, this tradition is a way to bring families and congregations together. 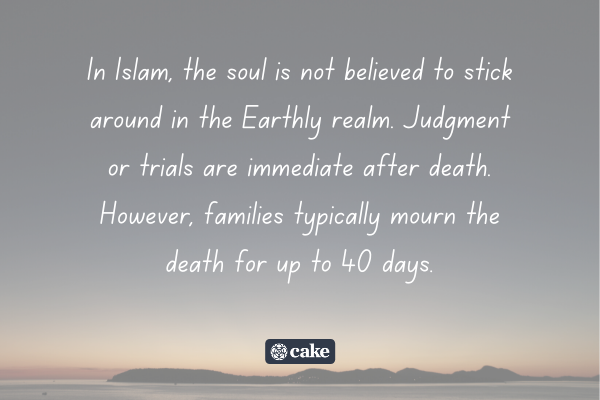 Believe it or not, Catholicism isn’t the only religion that practices the 40 day mourning period after death. In Islam, it’s traditional to have a 40 day long mourning period as well. This period could be shorter or longer, depending on the relationship to the deceased. For example, widows observe a longer mourning period of up to four months and ten days

Like in Catholic traditions, the Islamic funeral focuses on the separation of the soul from the body. Again, the soul is tested after death. There are some differing beliefs in how the soul is treated after death, but most believe there is some form of judgment. The righteous achieve peace and comfort in the afterlife while sinners face punishment. Life is merely a test in preparation for God.

In Islam, the soul is not believed to stick around in the Earthly realm. Judgment or trials are immediate after death. However, families typically mourn the death for up to 40 days. They do a number of things to reflect on their belief in God. Common practices are:

Like other traditions, Muslims use this time of mourning to reflect on life and grow closer with those they love.

It’s interesting to compare the post-funeral traditions across the globe. There are striking similarities in how people from a variety of cultures pay respects to those they love. Mourning is a time to come together, reflect, and focus on the importance of life. In many traditions, the 40 days after the death of a loved one are vital. The souls of loved ones are currently undergoing the biggest transition from Earthly life to the afterlife.

Families and friends use their customs and practices to aid the deceased during this transition. While these practices above all help the soul of the deceased, they also help the family find its own peace. Finding peace in the passing of loved ones is a part of life.