Many readers might see the Ace of Spades as nothing more than another innocuous card in the deck. However, to some people, this card carries a heavy energy. People and cultures throughout the world have long considered the Ace of Spades to be a symbol of bad luck and death.

Like symbols of mourning and euphemisms for death, such traditional and/or superstitious beliefs can potentially help us cope with our own mortality by forcing us to confront it, even if they also induce fear.

This brief guide will cover some of those beliefs, describing how their roots in early fortune-telling influenced modern interpretations of the Ace of Spades. It will also explore how pop culture has kept these superstitions alive (no pun intended) throughout the years.

What’s the Meaning of the Ace of Spades, or the Death Card?

The Ace of Spades symbolizes many different fearful ideas or experiences depending on the context. In numerous cultures, its dark color (or lack thereof) associates it with imminent death, bad fortune, disaster, hatred, war, and even the end of the world.

There’s also reason to suspect these beliefs stem not only from the card’s dark color but also from the fact that we use spades to dig into the earth. That means some might easily associate a spade with digging a plot for a casket or coffin.

Why Is the Ace of Spades Called the Death Card? 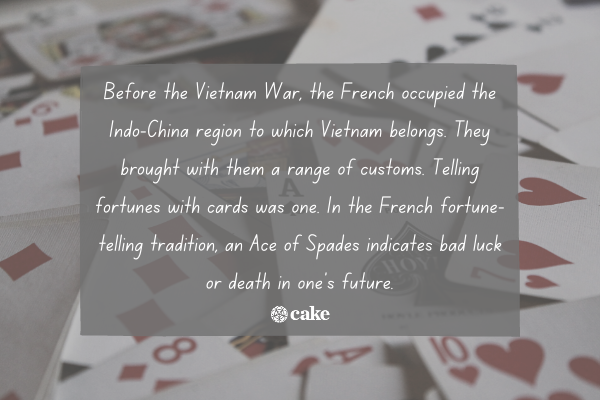 Before the Vietnam War, the French occupied the Indo-China region to which Vietnam belongs. They brought with them a range of customs. Telling fortunes with cards was one. In the French fortune-telling tradition, an Ace of Spades indicates bad luck or death in one’s future.

United States troops in the Vietnam War heard this caused some superstitious Vietnamese to fear the card to such a degree that they’d retreat at the very sight of it. Thus, two Lieutenants from Company C, Second Battalion, 35th Regiment, 25th Infantry Division actually contacted the Bicycle playing card company asking if they’d provide decks containing only the Ace of Spades. According to the company’s account, Bicycle honored this request, sending thousands of such decks at no charge.

The troops who received the Ace of Spades-only decks reportedly used them as a means of promoting fear among the Viet Cong. They would place the Ace of Spades cards on the corpses of slain enemy combatants, leave them in villages, scatter them in the jungle, and according to some reports, even wear them in their helmets, as if to tell the enemy they brought death with them.

Fear of the Ace of Spades may not have been as widespread in Viet Cong soldiers as some reports claim. This type of psychological warfare maintains some of its roots in western assumptions that eastern foreigners may be more superstitious than their American invaders. Regardless, this helped propel the idea that the Ace of Spades is an omen of ill fortune.

Is the Ace of Spades Bad Luck?

Those exposed to French fortune-telling may not have been the only ones who considered the Ace of Spades to represent bad luck. Throughout history, it hasn’t been uncommon for some gamblers to believe that the Ace of Spades also represents poor fortune.

None of this is to say the Ace of Spades actually does bring about bad luck. In fact, if you give in to the belief that the Ace of Spades will cause you to experience poor fortune, you may genuinely be more likely to fall prey to bad fortune in the future.

Researchers have found that when people believe in certain bad omens, if they encounter those omens or symbols, they may experience a psychological effect that results in a state of fear, uncertainty, and lack of confidence. The opposite, however, is true. Exposing people to good luck symbols (if they believe in them) increases confidence and optimism.

Both of these states can easily affect the future. For example, maybe you’re a superstitious person on your way to take an important test, and you come across an Ace of Spades in some form. This could make you so fearful that you perform below your abilities on the test. Your mental state will distract you. However, because you’re superstitious, you may associate the poor outcome with the Ace of Spades you saw, reaffirming your belief that the card is bad luck.

This isn’t to dismiss all superstitions. These kinds of traditional beliefs can play an important role in a person’s cultural and personal life. Just remember that putting too much emphasis on a belief in bad luck symbols could potentially cause you to experience more “bad luck” than you otherwise would. This self-fulfilling prophecy might even explain why superstitious beliefs about the Ace of Spades have persisted for so long.

Examples of the Ace of Spades in Popular Culture 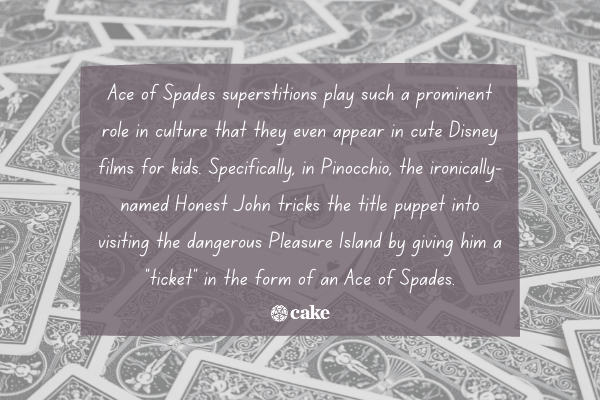 Although its role in the Vietnam War is the reason many people today refer to the Ace of Spades as the Death Card, remember, beliefs associating the card with bad luck and death pre-date the war.

So, it may come as no surprise to learn that the Ace of Spades has symbolized death in a range of pop culture dating back to over a century ago. The following are some particularly noteworthy examples:

Pioneering hard rock group Motorhead has plenty of tunes that heavy metal and punk fans alike consider classics. However, the band’s most well-known track has long been “Ace of Spades” from the album of the same name. Even those unfamiliar with the band may recognize the first few seconds of the iconic opening bass riff.

The song’s lyrics reflect the superstitious beliefs of gamblers about the card that gives the track its name. The song is told from the POV of a gleefully self-destructive gambler who claims “the only card I need is the Ace of Spades” as he describes the, uh, “joys” of living recklessly, losing money routinely, and happily accepting his life won’t last forever. All of this corresponds with the belief that the Ace of Spades represents bad luck and death.

The I Love Lucy episode “Lucy Thinks Ricky is Trying to Murder Her” gave audiences a more comedic take on Ace of Spades superstitions. During one scene in the episode, Lucy and her friend Ethel are telling fortunes with playing cards.

When Ethel deals the cards to tell Lucy’s fortune, fear overtakes her. Lucy asks why she’s so afraid, and Ethel admits the Queen of Hearts she dealt represents Lucy, and the Ace of Spades represents death. This causes Lucy to fearfully assume her husband plans to murder her. (Of course, anyone familiar with the show knows that was never an actual possibility!)

For instance, in Act III of the opera Carmen, the title character and her friends tell their fortunes with cards. The appearance of the Ace of Spades (spoilers ahead!) worsens Carmen’s fear that her death is imminent. This fear sadly turns out to be warranted when her jealous ex-lover murders her.

Ace of Spades superstitions play such a prominent role in culture that they even appear in cute Disney films for kids.

Specifically, in Pinocchio, the ironically-named Honest John tricks the title puppet into visiting the dangerous Pleasure Island by giving him a “ticket” in the form of an Ace of Spades.

The Ace of Spades: A Symbol (and Reminder) of Death

Just keep in mind, a symbol of death doesn’t need to be a negative symbol. It can instead serve as a powerful reminder to live life to the fullest while you still can—thanks, Motorhead.