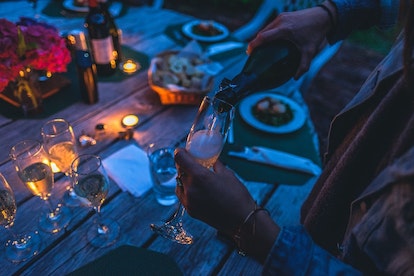 There’s a recent trend in event-planning. After a big party, like a wedding, some people like to hold what is referred to as an afterglow. An afterglow is a small, intimate gathering where people celebrate together. One event that people can have an afterglow after is a funeral. It’s not dissimilar to a wake or a funeral repast, where people can remember the deceased in a less formal setting.

People can enjoy food and drinks and share stories about the deceased. They can also make a toast to the deceased or read funeral poems to commemorate their lives.

Here, we share some poems that could be read an afterglow for many people in your life, regardless of your relationship.

There’s a saying that no parent should have to bury a child. What that means though, is that children often end up having to bury their parents. It can be hard to put that kind of loss into words. These poems can help you pay tribute to the people who gave you life.

1. "Do Not Stand at My Grave and Weep" by Mary Elizabeth Frye

When your parents pass away, they will want you to move on with your life. In this poem, the deceased urges her loved ones not to stay at her grave but to move on and experience life. It’s a great afterglow message.

This poem is perfectly suited for an afterglow celebration based on the title alone. But its message fits, too. It urges mourners to celebrate happy memories of the deceased.

3. "Your Clothes" by Judith Kroll

When you think about your mother, you probably remember the clothes she wore. This poem pays tribute to the artifacts our parents leave behind.

4. "To My Father" by Georgia Harkness

Fathers can be as strong and sheltering as an old-growth pine. This poem delves into that metaphor. It’s a beautiful tribute to someone who always stood steadfast in your life.

5. "To Her Father with Some Verses" by Anne Bradstreet

If you feel you owe a debt of gratitude to your father, this is the perfect poem to read at his afterglow. It pays tribute to the ways fathers support us.

Grandparents play a special role in our lives and hold a special place in our hearts. When we die, we want to honor them and treat them with respect. These poems are lovely to share at an afterglow celebration in honor of a grandparent.

Heaney, an Irish poet, excelled at capturing the scenery and people around him. In this evocative poem, he celebrates a hardworking grandfather. He also pays homage to how his hard work set an example for future generations.

7. "Grandfather, His Book" by Ronald Wallace

This poem pays tribute to a grandfather who found joy in sharing the story of his life with the world. If your grandfather was a natural storyteller, this is a lovely tribute poem.

When you close your eyes and remember your grandmother, you probably remember the way she smelled. Grandmothers often have a signature scent they wear throughout their lives. This poem captures that.

Your grandmother may not have always had the easiest life. This poem honors a grandmother who made sacrifices for her family and soldiered on despite her own troubles.

10. "Nothing Gold Can Stay" by Robert Frost

Frost is one of America’s most beloved poets, thanks to his keen grasp of imagery. This short, bittersweet poem highlights the fleetingness of life. It is a fitting tribute to any grandparent.

When a child dies, it is a real tragedy. There are so many things they’ll never get the chance to experience in life. It can be hard to put that pain into words. Luckily, poets have written works that help transform that pain into beautiful words. These poems are a sweet tribute to a child who has left this world too soon.

11. "Epitaph on an Infant" by Samuel Taylor Coleridge

This poem is so short, we’ve included it in its entirety:

Ere sin could blight, or sorrow fade,
Death came with friendly care;
The opening bud to heaven conveyed,
And bade it blossom there.

It can be seen as a metaphor for how short the life of a child is when they die so young. But it’s also surprisingly uplifting for such a tragic subject matter, making it a perfect fit for an afterglow celebration.

In this bittersweet poem, a town comes together to celebrate a young person’s accomplishments. Then, they come together again to honor them after their early death. This poem could honor a teen or young person who dies too soon.

13. "Garden of Stone" by Michael Kaner

The titular garden of stone in this poem refers to a cemetery where a child is laid to rest after being plucked from the Earth too soon.

When a child is in utero, they are connected to their mother by an umbilical cord. If a child dies, they remain connected by a cord between their hearts.

This poem was written by a mother to comfort other parents who have lost a child. Though the subject matter is sad, there’s an element of hope that fits in well at an afterglow.

Afterglow Poems for a Friend

Funerals often focus on the family members of the deceased. Only close friends might be offered the opportunity to participate or to give a reading. An afterglow celebration can give you the chance to commiserate with other peers about the death of a friend. Here are some poems you might read in honor of a friend who has passed away.

Afterglow celebrations tend to be uplifting. This poem is all about saying goodbye to someone, but promising you will always cherish the good times you shared. It’s the perfect fit for this kind of gathering.

We often become friends with people because they inspire us in some way. This poem celebrates the existence of those friends who have changed your life. It also promises that we will keep living our lives by the example they set.

A Shakespearean sonnet may seem like an unconventional way to honor a friend. But this poem celebrates a lengthy friendship. The opening lines...

To me, fair friend, you never can be old,
For as you were when first your eye I eyed,
Such seems your beauty still

...can also describe someone frozen in time by death.

This poem isn’t about death, but it is about friendship. Its final lines...

How much love inside a friend?
Depends how much you give ’em.

...sum up the special relationship that friends can have. It’s a more lighthearted poem for an uplifting afterglow.

Afterglow Poems for a Brother or Sister

Siblings have a unique bond. Even if you’re dissimilar people, you have a shared history that bonds you. When a sibling dies, it can feel like losing part of yourself. An afterglow can give you the chance to pay homage to the special relationship you shared. These poems are perfect in encapsulating the sibling relationship.

Clifton was a gifted writer who was the Poet Laureate of Maryland for six years. In this poem, she captures the similarities that sisters share with one another.

Shapiro wrote this poem about the death of his own sister Sheila. It perfectly captures the feeling of helplessness after a sibling bond is broken by death.

Heaney was a prolific poet, known for tackling the intricacies of human relationships. Here, he examines a sibling relationship that is complicated in life and in death.

This hopeful poem is a lovely reading for an afterglow celebration. It takes the position that your brother is at peace, and will live on in your heart.

Heaney has made several appearances on this list. But it’s impossible to talk about poems regarding the death of a brother without talking about this work. It’s one of the most moving poems ever written about the loss of a younger brother.

Afterglow Poems To Celebrate People Who Meant a Lot To You

When someone you love dies, there are many ways to honor them. You can write an obituary. You can deliver a short eulogy. Or you can share a poem as a tribute to the relationship you shared. There isn’t enough time for everyone to speak at a funeral. But an afterglow party can give people an opportunity to share meaningful words in honor of a loved one who has passed.

If you are ready to start end-of-life planning, you may be beginning to prepare funeral plans. Including plans for a more casual gathering, like an afterglow, can be another way to give closure to your loved ones.