Death is the great unknown. That’s why it makes a fascinating subject for books and movies. Here is a list of movies that deal with death and the afterlife. Some are based on near-death experiences, while others are hilarious dark comedies. Others are serious reflections that ponder life after death. And a few were made to terrify the viewer.

Here are 25 movies about the afterlife. 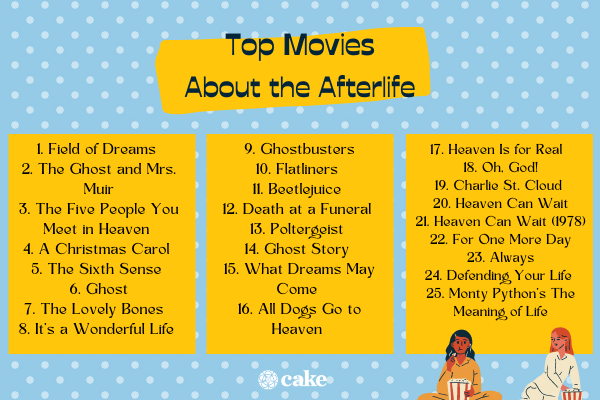 An Iowa farmer hears a voice say, “If you build it, he will come.” The “it” is a baseball field in the middle of his corn crop. Once built, deceased baseball players return from the afterlife to play their favorite game.

This American classic stars Kevin Costner, Amy Madigan, James Earl Jones, and Ray Liotta. For fans of the movie, the actual Field of Dreams is open for tours in Dyersville, Iowa.

The Ghost and Mrs. Muir, which was based on a 1945 novel by R. A. Dick, stars Gene Tierney, Rex Harrison, and George Sanders. It is about a woman who moves to a remote home on the English seaside. Once there, she finds herself living with an unintended house guest, a ghost. She begins a relationship with the spirit and agrees to write his memoirs.

This movie explores relationships between the living and the dead. While one would assume that this movie would be classified as a fantasy/horror movie, it is a romance. The movie was produced by 20th Century Fox in 1947.

3. The Five People You Meet in Heaven

The Five People You Meet in Heaven is based on Mitch Albom’s book. Albom is known for writing about death and the afterlife, including Tuesdays with Morrie, which focuses on interviewing a dying professor. In this movie, John Voight plays an elderly maintenance man encountering ghosts from his past. These visits help him understand the purpose of his own life.

There are dozens of versions of this Charles Dickens classic. Versions set in Dickens’ Victorian England and New York in the 1980s are just two that exist. The main character, Ebeneezer Scrooge is visited by four ghosts from the afterlife. These visits change the course of his life.

A Christmas Carol is one of the most widely-known stories in the world.

Written and directed by M. Night Shyamalan, The Sixth Sense is about a child who can see ghosts. Viewers will enjoy the plot-twist ending of this modern classic. Bruce Willis stars alongside Haley Joel Osmond in this famous film.

Does love keep going after a person dies? This blockbuster hit from 1990 explores that idea, with Patrick Swayze in the starring role as the ghost partner looking to sort out precisely why his spirit is still on earth.

Alongside Demi Moore and Whoopi Goldberg, this movie features some iconic scenes and acting. Goldberg won an Oscar for Best Supporting Actress for her role in this film.

Based on a book with the same title, The Lovely Bones tells the story of a young girl, portrayed by Saoirse Ronan, after she is murdered. She watches her family (Rachel Weisz and Mark Wahlberg) grieve her loss, while also keeping a close eye on her killer from the afterlife.

Peter Jackson directed this 2009 film, which received both Oscar and BAFTA nominations for the supporting cast.

Is this Christmas classic about the afterlife? Sure it is! In It’s a Wonderful Life, Jimmy Stewart’s character is visited by an angel, during a low part of his life. The angel shows Stewart’s character how vital he is to his community, by showcasing scenarios, decisions, and the ultimate consequences if he were not around.

This movie came out in 1946 and is an annual Christmas film to watch. It celebrates small-town life, and is known for the classic line, “every time a bell rings, an angel gets its wings.”

Ok, maybe we are grasping at straws here, but Ghostbusters is most certainly about the afterlife. If Slimer isn’t from the great beyond, then where is he from? The original version of this movie stars Dan Aykroyd, Harold Ramis, and Bill Murray.

In many interviews, Dan Akroyd has described Slimer as the ghost of John Belushi.

Five medical students participate in near-death experiences in this intense movie. It was released in 1990. A remake was made in 2017. Spoiler alert: Experimenting with death is never a good idea.

Beetlejuice is part fantasy, part horror, and part comedy, as one would expect from director Tim Burton. This offbeat film stars Michael Keaton as the titular character Beetlejuice.

Summoned by two ghosts in their house, Beetlejuice helps the couple scare away the new tenants. But everyone soon learns, bargaining with Beetlejuice comes at a price. Think carefully before you say his name three times.

The original (and funnier) version of this movie was released in England. In it, a family comes to grips with the death of the patriarch of their family. As they prepare for the memorial service, they learn surprising things about their father’s life. Death at a Funeral is a dark comedy that asks many questions.

In this original haunted house story, a young girl is enticed by a group of ghosts and questionable spirits. Ultimately, she gets captured, leaving her family to figure out how to bring her back to life on Earth. Steven Spielberg wrote and produced Poltergeist. It was released in 1982.

Ghost Story is based on the novel by Peter Straub. The 1981 movie tells the story of two generations of men piecing together memories from a traumatic killing, believing that the victim is haunting them. Did you know that dance legend Fred Astaire starred in this movie?

15. What Dreams May Come

This other-worldly movie stars Robin Williams. In it, Williams’ character is escorted through a dream-like afterlife by a guide. Cuba Gooding Jr. plays the role of Williams’ guide.

All Dogs Go to Heaven is about a German Shepherd (voiced by Burt Reynolds) who returns to Earth after death. He sets out to exact vengeance on his killer, but his plans change when he meets a young girl.

Heaven Is for Real is about the real-life near-death experience of a four-year-old child. The movie stars Greg Kinnear. It was released in 2014.

George Burns plays the title character in this movie from 1977. In the film, God directs a character played by John Denver to spread his message to the world. George Burns was 81 years old when he starred in this film.

Charlie has the gift of being able to see dead people. This gift gives him solace since it enables him to interact with his dead brother. Charlie, played by Zac Efron, has to choose between this ability and new love in this film from 2010.

Not all movies about the afterlife take place in Heaven. In Heaven Can Wait, a villain dies and tries to convince the Devil that he deserves a spot in Hell. This movie is something of a screwball comedy. It was released in 1943. Another film with the same name was made in 1978.

The 1978 version of this movie shares a title with the 1940s film, but that is where the similarity ends. This comedy/romance stars Warren Beatty as a star football player who prematurely passes away and looks to revive his dreams back on earth.

How many times do we dream of having one more day with someone who passed away? In For One More Day, written by Mitch Albom, a writer is granted his wish to spend the day with his mother. Of course, this visit changes the course of his life.

Steven Speilberg directed Always, the story of two pilots, one dead who mentors the one living. The 1989 movie stars Richard Dreyfuss, John Goodman, and Holly Hunter. It also features Audrey Hepburn, who donated her entire salary for the film to UNICEF.

Those who are recently deceased must await judgment in the after-life. In Defending Your Life, the after-life resembles a block of hotels. Albert Brooks directed and starred in this 1991 movie.

25. Monty Python’s The Meaning of Life

The writers of The Meaning of Life have a particular view of the afterlife. While the movie captures seven stages of life, the afterlife part consists of Vegas-style showgirls walking down huge, lit staircases. What would the afterlife look like to you?

Escape With a Movie

Sometimes the best way to escape the reality of life is to enjoy a movie. Consider watching these movies when you have had a chance to process your grief. It may take months. It may take years. Hopefully, you will one day be able to enjoy movies that broach this difficult subject.