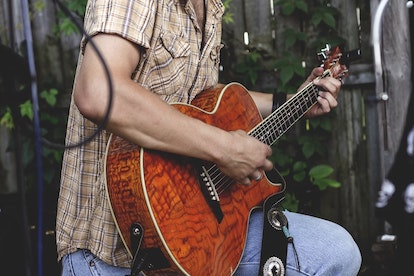 For decades, Alan Jackson has been well known for more than just his golden country songs. Jackson is also an accomplished gospel musician. With a clean, natural baritone, he sings about small towns, devotion, and love. In the songs, you'll notice the lyrics are intimate. In part, this is because he shares much of his own life.

When considering music for a funeral, memorial service, or virtual funeral experience, it's okay to choose something other than the traditional funeral song. You can choose one that conveys a bliss you've known through loving someone for many years. Or, you can opt for a more upbeat song. It's up to you.

Have a look at the songs compiled below. Chances are, one of these Alan Jackson songs will be a perfect ode to your loved one.

COVID-19 tip: If you're hosting a Zoom funeral using a service like GatheringUs, ask your online guests about the deceased's favorite Alan Jackson songs. Put them into a playlist during the downtime after the funeral and play them during the virtual reception.

Composed in 1912, George Bennard wrote this hymn in response to some youthful mockery. Today, it is one of the most played and recorded hymns. Alan Jackson's version maintains the original sentimentality.

A perfect, soft-timbered song showcases how much you loved your special someone. Plus, there’s an eternal sweetness that accompanies a once-in-a-lifetime love.

3. "Just as I Am" from Precious Memories Collection

Written in 1835 by Charlotte Elliot, this hymn is about being accepted and forgiven. Alan Jackson’s rendition is both soft and tender.

Country songs permit us to accept our faults. This one lets you know that it’s reasonable to think about the regrets and failures following the loss of a loved one.

No one knows why mothers die young. Perhaps this song might help those at her memorial service worry a little less, knowing that she’s with God and loved ones in Heaven.

6. "Only Trust Him" from Precious Memories Collection

As a revival hymn, "Only Trust Him" lets parishioners echo the sentiments of the preacher. The piano accompaniment brightens the song, making it more approachable for smaller venues.

7. "I Want To Stroll Over Heaven With You" from Precious Memories

This song is a beautiful blend of gospel and country. Alan Jackson sings that the perfect ending to a blessed life would be to walk into heaven, hand in hand with the love of his life.

This country song is a tribute to love. If you are having a memorial service for your sweetheart, you might choose this honest love song to express how much you adored them.

9. "What a Friend We Have in Jesus" from Precious Memories Collection

Joseph Scriven was very familiar with tragedy. Yet, his strength in nearness to Jesus was what sparked this hymn. Alan Jackson's recording feels much more somber than the original score.

This hymn by William W. Walford celebrates the time of prayer which washes your worries away. For that brief period, this meditation on God will bring you peace.

Poet and clergyman John Newton wrote this classic Christian hymn in 1772. Now, Alan Jackson’s deep, rich voice has made it into a timeless and beautiful country song.

12. "The Angels Cried (Duet with Allison Krauss)" from Honky-Tonk Christmas

Funerals don't stop because there's a holiday around the corner. So, if you're planning a memorial service at Christmas time, here’s a sweet song to add to the playlist.

13. "Monday Morning Church" from What I Do

Jackson's song describes how loss and grief can cause us to get angry, change our resolve, and throw us off course. There's a soft voice, but a raw honesty, too.

14. "Oh How I Love Jesus" from Precious Memories Collection

Frederick Whitfield composed many hymns throughout his life. This hymn revels in adoration for Jesus because He sacrificed Himself for man. Alan Jackson’s recording echoes the original sentiment while adding some country influence.

If your playlist includes songs of worship, consider "Blessed Assurance." In this country funeral song, you'll discover some solace and peace.

When someone dies, we often fill our heads with any and every memory of them that we can process. Sometimes the whirlwind of thoughts becomes so difficult to escape, that we feel irrational or even foolish.

"As Lovely as You" expresses how much you long to see your loved one. In the escape of dreams, you can spend time with them. They can still be part of your life.

18. "I Love to Tell the Story" from Precious Memories Collection

The shared notoriety of this hymn goes to both Kate Hankey and William G. Fischer. Hankey was a missionary, while Fischer was a music conductor. Alan Jackson's version of this hymnal song is methodical, much like a rhythmic speech.

19. "When We All Get to Heaven" from Precious Memories Collection

Eliza Hewitt wrote this hymn in 1898 to rejoice and praise the time she will be united with God. In Alan Jackson’s version of "When We All Get to Heaven" the song transitions into a kind of jubilant Appalachian or Hillsong style.

20. "Livin’ On Love" from Alan Jackson: The Greatest Hits Collection

"Livin On Love" is the perfect memorial song for the couple that had to scrimp and scrape when first married—then thrived on love later on.

The story captured in this song is about a husband who can't believe how time has flown by. He's even a little surprised that it's gone so well. So, if he had another chance to do it all over again, he'd make the same decisions.

Looking back at life shows more flashes of memory than long epic tales. But even the small moments which spring to mind can be some of the most precious.

No matter how well resolved you are to saying goodbye, everything becomes bittersweet. Simple words become devastating. Even small things can take on new or deeper meanings.

24. "Leaning on the Everlasting Arms" from Precious Memories Collection

Elisha Albright Hoffman composed this hymn to reflect on the passing of Moses. Following Moses's faith and devotion to God, Hoffman emphasized a sense of fearlessness. Alan Jackson's version is both comforting and joyful.

As a tribute to your partner, this song recognizes that age doesn't take one's passion for living. It's less conventional than most memorial songs. But it'll speak to you if you knew someone who never failed to suck the marrow from life.

26. "Wherever He Leads I’ll Go" from Precious Memories Collection

"Wherever He Leads I'll Go" is a hymn written by a missionary in 1936, B. B. McKinney. He lived and preached the devotional words throughout his entire life. Alan Jackson's version seems to mimic the tireless sentiments.

27. "Till the End (Duet with Lee Ann Womack)" from Freight Train

This slow, sweet song is a vow. No matter the years, miles, or fading memories, you promise to keep loving her until you can meet once again.

28. "In the Garden" from Precious Memories Collection

C. Austin Miles wrote, "In the Garden" based on John 20:14. Miles felt that in being able to walk with Jesus in the garden, he would rejoice in truth. Alan Jackson's rendition is more contemplative than uplifting.

29. "There’s Power in the Blood" from Precious Memories Collection

Alan Jackson’s saloon-like piano strikes make for an uplifting funeral song. Lewis Edgar Jones composed this hymnal song in 1865. He intended to highlight the sacrifices Jesus made to save His people.

Alan Jackson has been a revered country singer for many years. Many of his songs will make beautiful additions to any funeral or memorial service you plan. We hope that with these traditional and non-traditional songs, you can create a beautiful playlist.