Fall in America is full of things like the changing of leaves, pumpkin carving, trick-or-treating, and other Halloween fun. However, for the rest of the world, this list doesn’t even scratch the surface. After the fun and excitement of Halloween comes another important tradition: All Saints’ Day.

All Saints’ Day goes by several names, some of which might surprise you. Hallowmas, All Hallows’ Day, and Solemnity of All Saints are a few of the ways you might have heard of this time of year. All Saints’ Day is a Christian festival for honoring the saints, both those known and unknown. It’s still celebrated today in several cultures and religions.

All Saints’ Day falls on the first of November. This year, celebrate this ancient festival by taking a closer look at the history and traditions from around the globe.

All Saints’ Day is also a way to honor the saints who aren’t canonized, or in Heaven. In the Catholic tradition, some saints are known only to god. These don’t have their own special days of celebration, so they’re acknowledged on All Saints’ Day.

This tradition revolves around a big feast, and it’s been a part of the Christian tradition since the Roman Empire. It’s actually closely related to the Western holiday Halloween. The day before All Saints’ Day is referred to as All Hallows Eve since it was the eve of the celebration. Today, we just know this as Halloween. Though these celebrations have pagan origins, they’ve incorporated into the Christian tradition.

The day after All Saints’ Day is All Souls Day. This is the day in which Catholics celebrate those who are in Purgatory and will soon be cleaned of their sins to enter Heaven. All Saints’ Day truly is a time for reflecting on traditions past, history, and being with the ones you love.

What’s the Difference Between Halloween, All Souls’ Day, and All Saints’ Day?

When you hear about All Saints’ Day, it’s easy to get this holiday, Halloween, and All Souls’ Day. What’s the difference between these three days and celebrations? These events are part of a 3-day observance and celebration of the autumn season.

The first celebration in the series is Halloween, also known as All Hallows’ Eve. Halloween  is celebrated on October 31st, and it’s a time most Americans associate with pumpkins and spooky costumes. All Hallow’s Eve dates back to Celtic celebrations in Ireland. This likely originated as the harvest festival known as Samhain.

During Samhain, the “bridge” between the living in the dead was opened. This was a day when the departed were thought to wander the land of the living. Today, this eerie association with Halloween and death still exists, though it’s also a time for happy celebrations.

What is All Saints’ Day and All Souls’ Day?

November 1st marks All Saint’s Day. Historically, this event began to combat the rise of pagan worship in the Roman Empire. Originating some time around 609 AD, this was a time for honoring Christian saints. In modern times, Christians still celebrate All Saints’ Day with a feast and a prayer.

Lastly, November 2nd is All Souls Day, a time to honor those whose souls aren’t yet cleansed. In Christianity, it’s important to pray for the souls of the dead so they find the ultimate peace in Heaven after death. After death, those who aren’t yet ready for Heaven linger in a space known as Purgatory. On All Souls’ Day, Christians pray for these souls and their safe passage to Heaven.

Both Christians and non-Christians alike participate in these fall festivities. These holidays date back thousands of years, and it’s easy to get them confused. Ultimately, they’re all a way to honor the dead, the changing seasons, and remembrance.

When is All Saints’ Day?

All Saints’ Day is on the first of November. Though this is the day of the official feast, the actual festivities last a total of 3 days. It starts on All Hallows Eve, or Halloween. This is on October 31.

From there, the actual day of celebrating saints is on November 1. The final day is November 2, known as All Souls’ Day. Both November 1 and 2 are days to remember the dead in the Catholic tradition. While Halloween is the American spin-off of the Catholic prayer days, many still acknowledge the historical importance of All Hallows Eve.

History of All Saints’ Day 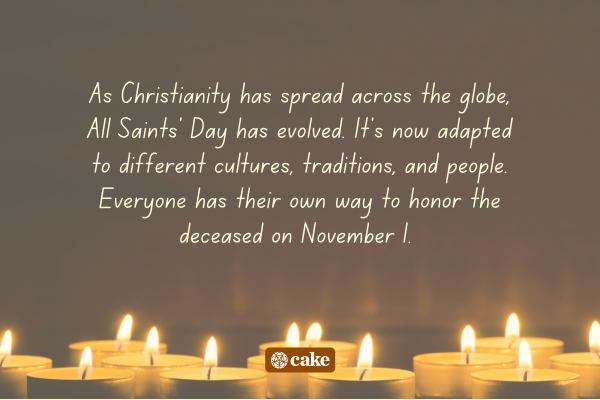 Even if you’re not Christian, it’s interesting to consider the history of All Saints’ Day. It has a unique tie to American pop culture and Halloween, and it has a strong presence around the world. Today, it’s still linked to Catholic funeral traditions and practices.

All Saints’ Day dates back to the 4th century. As Romans persecuted the Christians in increasing numbers, they dedicated their own days to celebrate the martyrs and saints they so admired. However, it wasn’t cemented as a holiday until the 7th century under Pope Boniface IV.

In the 8th century, the holiday moved to November 1 to fall on the Celtic holiday of Samhain. Samhain, though pagan in origin, has a focus very similar to the Roman fall festival. Over time, these two traditions have merged into one celebration, both with rituals and festivities.

After the Protestant Reformation, Anglican and Lutheran churches retained All Saints’ Day. However, for these traditions, the emphasis is more on remembering the dead than celebrating saints. While Protestants still acknowledge the holiday, they commemorate all Christians both living and deceased.

As Christianity has spread across the globe, All Saints’ Day has evolved. It’s now adapted to different cultures, traditions, and people. Everyone has their own way to honor the deceased on November 1.

Why Do We Celebrate All Saints’ Day? 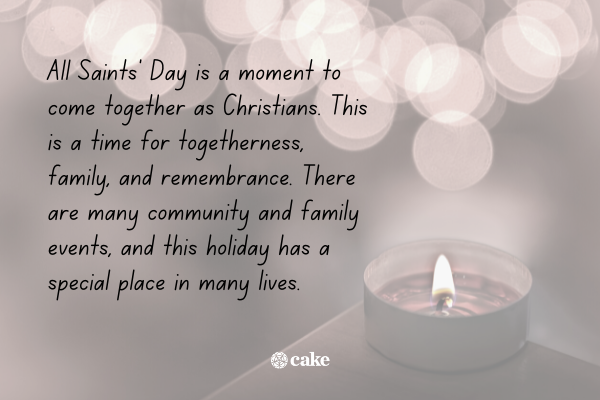 With this in mind, why do we celebrate All Saints’ Day today? Ultimately, this holiday (as well as All Souls’ Day) comes from the idea that the living are connected to those in Heaven. In Christianity, it’s important to honor the dead, especially those who were faithful during their lives.

How All Saints’ Day is Celebrated Around the World

All Saints’ Day is celebrated differently across the globe. Because each local tradition has adopted this holiday into existing customs, no two November 1 festivals are alike. Let’s explore some of the most popular practices around the world.

In North and South America

In North and South America, you’re more likely to hear All Saints’ Day referred to by its Spanish name, Dia de Los Santos. This is one of the biggest annual holidays in Latin America. It’s celebrated in America and Canada, but mostly within Catholic or Hispanic communities.

Dia de Los Santos has another name you’ve likely already heard before, Dia de los Muertos, or Day of the Dead. Like other places around the world, the traditions of All Saints’ Day merged with existing indigenous beliefs, blending the old with the new. In countries with a strong indigenous culture, you’ll find a lot of unique traditions associated with this celebration.

In Latin America, families visit the gravesites of their deceased relatives. They usually bring food and flowers with them. This is one of the most well-known Mexican funeral traditions, but it’s popular across all of Latin America. This is a time of inclusivity and celebration.

Doors are opened to guests who share traditional dishes, focusing on the favorite foods of their ancestors. Parties are held in cemeteries, and this is a joyous day.

Similar to Latin America, Europe also has put its own spin on this holiday. You’ll find different traditions depending on which country you’re in specifically. In Eastern Europe, it’s popular for families to light candles to bring to the graves of their relatives. In Germany and Austria, godfathers give their godchildren a braided pastry. As you can see, no two practices are alike.

In years past, it was more common for families to hold a feast at the gravesite. They’d also leave food and drink for their deceased relatives. Today, this is less common as feasts are usually held at home.

In Ireland, All Saints’ Day relies heavily on the Celtic tradition. This was a time of year that was believed to break down the boundaries between the mortal and unearthly realms. Ancient people believed their dead relatives could actually communicate with them during this time. Irish traditions help link these ties between the living and dead.

As the home to the Catholic Church, it’s no surprise Italy also has its own traditions. Each Italian region and family has its own way to celebrate, but there are some similar factors everyone shares. First, families all prepare All Saints’ Bread, a dough with raisins, figs, and walnuts. There’s also a special cake that’s common during the holiday. Many people exchange gifts with their family, and they also have parades in local cities and towns to memorialize the saints.

In the Philippines, All Saints’ Day is a day for bringing families together. This is a common time to hold large family reunions, and families flock to gravesites. Like other traditions, there’s a lot of traditional food and music. People visit their loved ones’ graves to pay respects, and it’s not uncommon for people to camp overnight in cemeteries.

The Filipino people are incredibly respectful of their dead. It’s common to take care of cemeteries all year long, not just during this holiday. However, cemeteries are specially decorated during the All Saints’ Day festivities, as the dead themselves are thought to be visiting in spirit.

It’s not uncommon for people in the Philippines to travel outside their province to return home for this holiday. It’s a cherished tradition for paying respect to deceased relatives and rekindling family ties.

Connecting the History of All Saints’ Day

While Americans spend this time of year collecting candy and watching scary movies, other parts of the world are taking part in an ancient tradition that dates back to the 4th century. All Saints’ Day is one of the world’s oldest holidays, and it’s made a mark on different cultures across the globe.

Across North and South America, Europe, and the Philippines, All Saints’ Day serves as a reminder to respect those who have passed. On its surface, it’s a family feast with traditional meals prepared by loved ones. If you dig deeper, you see that this is a powerful way for families to stay connected, even after the grave.

Now that you know the history and traditions surrounding All Saints’ Day, you’re ready to have a celebration of your own. Whether you join a local feast, visit a memorial service, or simply think about your loved ones, this is a time to pay your respects to all who have come before you.