Throughout the world, children (and sometimes adults) dress up as ghouls, goblins, and various other figures around late October. However, the specific nature of these celebrations may not necessarily be the same in all countries and cultures. Sometimes they don’t even involve dressing up at all. Or, if they do, it may be only a minor component of the celebrations.

Consider the example of Allantide. Stemming from Cornish traditions in the southwestern portion of the United Kingdom⁠—particularly from the county of Cornwall—this festival shares many similarities with Halloween in the U.S. That said, Allantide also has plenty of its own unique qualities.

Maybe you want to learn more about Cornish culture. Maybe you want to put a unique spin on a traditional Halloween celebration by hosting an Allantide party. Maybe attending various different types of Halloween celebrations across the globe is part of your October bucket list. No matter what your reasons for wanting to know more about Allantide may be, this blog can help. 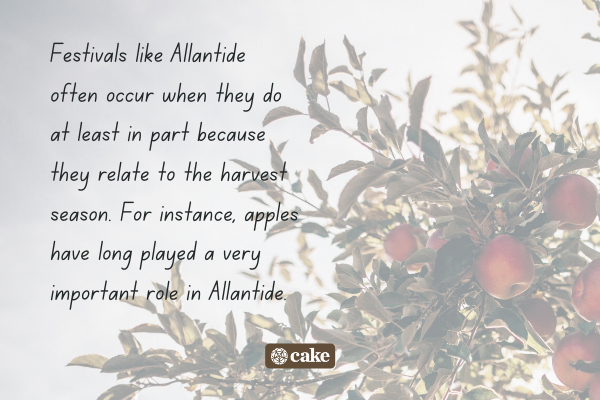 Allantide, which likely got its name from the Feast of Saint Allan, isn’t merely the Cornish equivalent of Halloween.

While both holidays have similar roots (and similar traditions in some cases), Allantide is still very much its own unique festival.

Numerous cultural, spiritual, and religious belief systems throughout history have given late October and early November a special significance. Halloween as we know it today is by no means the first example of a fall holiday people associate with the dead. For instance, ancient Celts began celebrating Samhain thousands of years ago.

Between October 31 and November 1 they believed the barriers separating the world of the living and world of the dead broke down, and the two worlds overlapped. Many of the traditions they practiced during Samhain loosely contributed to some of our modern Halloween traditions, although they’ve developed and taken on different forms over time.

DÍa de los Muertos, or Day of the Dead, is another example of such a festival. In late October and early November, many people in Mexico and some parts of Central America pay tribute to the dead at shrines. Others dress up as skeletons and similar characters. Communities may feature a range of skeleton-themed decorations. According to traditional beliefs, the dead can also visit the living during this important holiday.

Like the examples mentioned above, Cornish tradition also holds that Allantide has major spiritual significance. In earlier times it wasn’t uncommon for Cornish people to seek the wisdom of fortune tellers on Allantide. They did so because they believed that during this festival the spiritual and physical worlds were more connected with each other. Later in this blog, you can learn about some of the specific ways fortune tellers might provide insights during Allantide.

Again, festivals like Allantide often occur when they do at least in part because they relate to the harvest season. For instance, apples have long played a very important role in Allantide. That’s almost certainly not a coincidence.

Additionally, the types of people who first celebrated Allantide often considered November to be blod-monath, which translates to blood month. This was when farmers would slaughter their animals. As a result, they naturally associated late October with death. 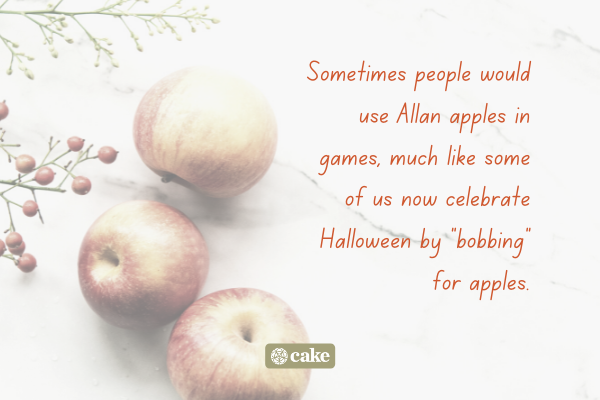 People who celebrated Allantide in the past did so through a range of unique traditions and activities. The following examples are merely some of the more noteworthy:

Remember, apples have long been a big part of Allantide. This is because in some areas of Cornwall towns would set up Allan Markets during the autumn months. These markets frequently sold large red apples called Allan apples.

Numerous Allantide traditions involving these apples started springing up. Some people would simply purchase an Allan apple and wait until Allantide to eat it. Others would give family and friends Allan apples as gifts, believing they might bring good luck.

Sometimes people would use Allan apples in games, much like some of us now celebrate Halloween by “bobbing” for apples. One game involved nailing two pieces of wood together in the shape of a cross. Players would suspend the cross from the ceiling horizontally and place four candles on each outcrop.

Next, they would suspend a number of Allan apples beneath the cross. Players tried to eat the apples as quickly as they could because the burning candles could eventually drip hot wax on them if they ate too slowly.

(No one ever said all Allantide traditions were safe! Even if celebrating Allantide is on your fall bucket list, this might be a tradition you’ll want to skip.)

Telling the future with metal

Due to the spiritual beliefs surrounding Allantide, some people would take this opportunity to try and learn about their futures.

One way they did so was by melting down metal until it became a liquid. They would then toss the liquid metal into cold water. It would eventually cool and take on a unique shape that was supposedly different every single time.

Young women in particular believed that the shape of the metal would specifically relate to the occupation of their future spouse. For instance, if the metal’s shape appeared to resemble a fish, they would assume they were going to marry a fisherman.

Another fortune-telling Allantide tradition involved tying a front door key between the pages of The Bible corresponding to the Song of Solomon with one’s left leg garter.

This supposedly endowed the key with mystical properties. Traditional beliefs held that once a person removed the key, it would begin twirling when someone mentioned the name of their future beloved.

Although these points should make it clear that Allantide is very different from Halloween as you might know it in a variety of ways, remember, the two holidays also have similarities.

For example, during Allantide, Cornish people would sometimes carve jack-o-lanterns using turnips. This tradition has changed somewhat over the years. Nowadays, they’ll more commonly use American pumpkins, as they’re easier to carve.

How Is Allantide Celebrated Today?

Some people and towns throughout Cornwall continue to observe Allantide. They may do so in the following ways:

Some older Allantide traditions remain in practice today. For instance, those celebrating Allantide will often give friends and loved ones Allan apples this time of year.

Various groups in Cornwall also celebrate Allantide today by organizing parties and festivals. These parties may feature a range of activities and experiences, including bonfires, live entertainment, markets, and even fireworks.

Some of those who organize these events believe it’s particularly important to host Allantide parties because they serve as reminders of their traditional Cornish culture. Thus, they often seek donations to keep them going. You may wish to do the same if you have Cornish ancestry and wish to explore it more deeply.

Reports also indicate these festivals sometimes include activities that we’d be more likely to associate with modern Halloween. Although you might prefer to observe Allantide in a strictly traditional manner, you could bridge the gap between cultures by planning a Halloween party that also includes some elements of Allantide.

Food can be an important part of many holidays and observances. Allantide is no exception. For instance, around this time of year, some people strive to make dishes featuring the types of ingredients and flavors Cornish people would commonly use in the past.

While not all of these dishes actually derive from traditional recipes, their ingredients capture the “taste” of Allantide.

It’s worth noting that not all Cornish people observe Allantide. Additionally, even if they do, it might overlap in some capacity with other traditions.

For example, children in Cornwall typically go trick-or-treating during this time of year. Although this custom doesn’t actually derive from traditional Allantide customs, over the course of history, it has integrated itself into some Allantide celebrations.

If you need another reason to skip the dangerous Allantide apple game described earlier in this blog, you should know that even Cornish people don’t play it these days. They’ve switched to bobbing for apples instead. You can probably guess why.

Allantide: Not Quite Halloween

Allantide is just one of many late October holidays and festivals you might not have known about. Although it may be similar to Halloween in some ways, by now, you can probably tell it’s also quite a unique representation of Cornish history.