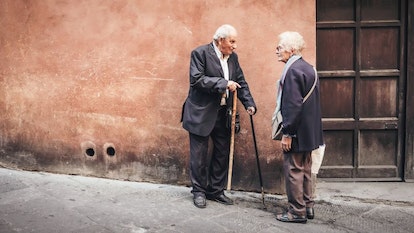 Just because someone’s approaching their golden years doesn’t mean they don’t still feel young at heart. While the most common term for older folks is ‘senior citizen,’ this isn’t always a fitting phrase in most contexts outside of legal forms and restaurant discount menus.

If you’re looking for alternatives to calling someone a ‘senior citizen,’ it’s not always easy to find clear options. Are there any choices that aren’t terms of endearment or grandmother names?

We did some brainstorming so you don't have to. In this guide, you’ll find the complete list of alternatives to calling someone a ‘senior citizen.’ Never find yourself stumbling to find the right words again, no matter the situation.

Is ‘Senior Citizen’ or ‘Elderly’ Politically Correct or Polite?

One of the main questions about the term ‘senior citizen’ is whether it’s politically correct or even polite. It’s true that this term feels harsh and makes the individual in question feel like less of a person, instead, being called a ‘citizen.’

Many argue that ‘senior citizen’ and also the term ‘elderly’ are ageist. They are often seen as demeaning to the over-50 population who don’t feel like they’re any less of a person than other adults. Many senior citizens today feel vibrant, active, and perfectly content with where they’re at in life.

In addition, people are living longer than ever before, thanks to modern medicine. This means the way we define ‘senior citizens’ and ‘elderly’ folks is also evolving. While today this is seen as anyone 50+, that’s sure to change soon.

The AMA Manual of Style actually corrected the preferred term when it comes to referring to older people. While they say the term ‘elderly’ is still okay when describing an issue related to the population as a whole, this isn’t the everyday term. Instead, they’re advocating for terms like ‘older persons,’ ‘older people,’ ‘elderly patients,’ ‘geriatric patients,’ ‘older adults,’ and ‘persons 65 years and older.’

It’s easy to see why these terms humanize the older population, giving them back their humanity in a way ‘senior citizen’ never could. While it’s not officially taboo to say ‘elderly’ or ‘senior citizen,’ it’s best to use these terms to only refer to the specific population as a whole, not individuals.

What You Can Call People Instead of ‘Senior Citizen’

Now that you know why the term ‘senior citizen’ is falling out of use, it’s time to talk about what you should say instead. While this will depend on the context, the individual, and your own personal speaking style, here are some popular alternatives.

It’s a good idea to follow the AMA Manual of Style’s lead with this one. When in doubt, keep it simple. ‘Older people’ and ‘older folks’ is almost always an appropriate alternative to ‘senior citizen.’

The keyword here is ‘people.’ By referring to this population as older ‘people’ instead of citizens (a term that sounds more like a number than an individual), you humanize this group of society.

Recently, many people on social media have been referring to older people as ‘olders.’ It might sound a bit strange at first, but you have to admit it has a certain ring to it.

Another common play on words is ‘perennials.’ This is a play on ‘millennials,’ and it’s easy to see why this is a favorite on social media and beyond. It’s all about helping languages keep with the times, and this is easier said than done.

Though ‘senior citizen’ is seen as patronizing, the same isn’t always said for the shortened ‘seniors.’

Because it excludes the word ‘citizen,’ it’s still seen as human and lighthearted. ‘Seniors’ allows for a lot of flexibility, so this word is sure to catch on faster than it’s lengthier alternative.

In academia and publishing, ‘older adults’ is increasingly common. This term creates a clear description of the aging population without making it an entirely new category of humans.

This less-offensive term is the new normal in many fields, and you can feel confident using it in most settings.

Another term that’s sometimes a mouthful is ‘people in their 50’s and up.’ This was popularized by The New York Times’ stylebook, and it’s flexible to any age group.

You’ll see The New York Times use anything from ‘people in their 70s’ to ‘people over 80’ to describe this group in a more specific nature. They’ve frequently commented that this approach is the most factual, thus it’s common sense.

Two other academic terms that are gaining popularity across society is ‘third age’ and ‘fourth age.’

Third age refers to the period after retirement but before a decline in health. The fourth age is one’s final years of life. While these terms do place a lot of emphasis on physical abilities, they are flexible.

A New Definition of Old Age

It’s also important to remember that old age isn’t something that’s easily defined. While this might have made more sense hundreds of years ago when not as many people were likely to reach their golden years due to famine, disease, and war, times are changing.

Today, 50+ or 65+ is an arbitrary distinction. It doesn’t really mean anything.

Instead, those in their retirement years and beyond are exploring new things, traveling, and staying active. The problem with most of the terms above (including ‘senior citizen’ and ‘elderly’), is that they imply that older folks are less than younger folks. They also imply that everyone ages in the same way, and that’s certainly untrue.

In reality, everyone experiences aging differently. There is no cookie-cutter term that covers the entire spectrum of experience. That’s where language fails. Words are powerful, but they can’t overcome the biases and gaps within society.

What’s more important is that you focus on the individual rather than the term. ‘Senior citizen’ and ‘older people’ have little difference at the end of the day. It’s always better to refer to people by their names, interests, and facts, not their age demographics. There’s no such thing as a one-size-fits-all term.

This linguistic problem isn’t likely to disappear any time soon. However, we can combat ageism and biases in our own lives by examining how we use language each and every day.

What’s In a Name?

As Shakespeare famously wrote, “What’s in a name? That which we call a rose by any other name would smell as sweet.” In other words, it doesn’t matter what word we use in everyday life. ‘Senior citizen’ and ‘elderly’ do little to cover the broad range of experiences for those defined by these age ranges.

Words have power, but it’s also important to note their limitations. It’s easy to understand why some might find the term ‘senior citizen’ offensive. It’s ageist and outdated, no longer fitting the modern-day experience of aging. It’s up to us to do better in the way we refer to the ones we love, demographics, and the world around us.