“Amazing Grace” is one of the most beloved and well-known spiritual songs of all time, so it is not surprising that many choose to have it played at their memorial services. Not only does the song have a beautiful melody, but it also features lyrics that speak to all of us.

“Amazing Grace, How sweet the sound!
That saved a wretch like me.
I once was lost, but now am found.
Was blind but now I see!”

We’ve narrowed a list to the 17 best “Amazing Grace” performances from which to choose. We’ve divided our list into three categories — best versions for a funeral, best a cappella versions, and best bagpipe versions.

Best Versions of ‘Amazing Grace’ for a Funeral 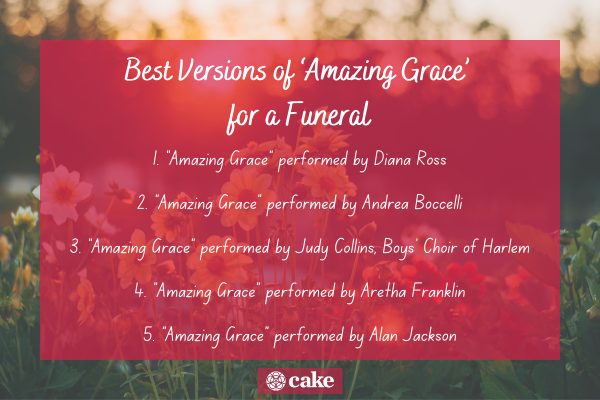 You won’t have any trouble finding an abundance of recordings of “Amazing Grace” online. You may have a difficult time finding one that is recorded well enough to play over a speaker system.

If you're planning a virtual funeral, with a company like GatheringUs, make sure you add the right version for the ceremony, memorial video, or reception.

Diana Ross has performed and recorded “Amazing Grace” dozens of times. One of her live performances can be found on the “Christmas in Vienna” recording. Ross performed the famous song with the help of the Vienna Symphony Orchestra.

This version is over five minutes long, so you may want to consider playing this as background music when people arrive at the service.

Andrea Bocelli’s blindness may cause his rendition to be even more poignant than other performances. However, Bocelli’s marvelous voice is the reason this recording is so popular.

There are a variety of versions available but consider checking out his performance in London in 2012.

3. “Amazing Grace” performed by Judy Collins and the Boys’ Choir of Harlem

Judy Collins, an American singer and songwriter, is known for recording a wide variety of music. She performed “Amazing Grace” with the Boys’ Choir of Harlem in 1993.

Of course, the Queen of Soul’s version of “Amazing Grace” must appear on this list. Aretha Franklin’s performance of the song in 2011 is one that is particularly memorable. In this performance, she draws out every note and leaves the listener feeling emotionally spent.

It wasn’t recorded live so there’s no applause at the end of the performance, which is an important consideration if you want to play a song directly off of YouTube.

Whitney Houston received her early music training from performing in her church’s choir as a child. Although she probably sang “Amazing Grace” hundreds of times, we love this version that she performed in South Africa.

Celine Dion’s performance of “Amazing Grace” grows in intensity throughout the length of the song. A full choir accompanies her at the end of the performance.

Some reviewers say that Mahalia Jackson’s performance of “Amazing Grace” is less of a performance and more like a time of prayer for an audience.

Jackson’s performance has been watched over seven million times on YouTube.

Elvis Presley, inspired by the music of his youth, recorded three gospel albums. We like the recording completed on his “He Touched Me” album in 1972.

The King of Rock and Roll allows the choir to outshine him in his performance of “Amazing Grace.”

Leave it to Ray Charles to sing “Amazing Grace” differently than everyone else. Although he performs the hymn with a full orchestra, his voice is more plaintive and modest than one would expect. 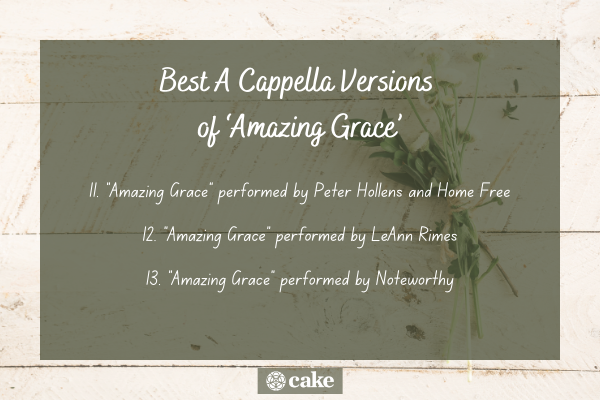 Even though our list has included some of the most famous versions of “Amazing Grace” ever recorded, sometimes the most poignant performances are those done with only a few pure voices. If you're putting together a digital playlist for a loved one's family, consider buying them a Spotify gift card so they can listen to the songs without ads.

Here are some versions that do not have a symphony orchestra or bagpipes performing in the background.

Here are some recordings to consider.

After listening to this performance of “Amazing Grace,” you’ll question whether this group of men sang with an orchestra or not. Six men’s voices blended together perfectly to create this stunning performance.

Brigham Young University’s a cappella group, Noteworthy, recorded a mashup of “Amazing Grace” and “My Chains are Gone.”

This nine-member group has won numerous awards since its premiere performance in 2007. Its performance has undoubtedly been noteworthy, as the video has had 53 million viewers on YouTube. 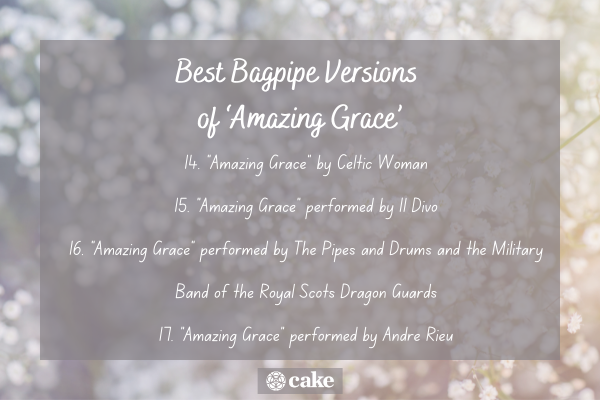 Bagpipes — you either love them or hate them. Even if you don’t appreciate this unique-sounding instrument, you may like hearing it during a performance of “Amazing Grace.”

Here are some versions of the song that feature bagpipes somewhere in the recording.

Celtic Woman has been performing since 2004. Group members change periodically but Celtic Woman is known for its ability to harmonize and for its packed-house live performances. The women were accompanied by bagpipes in the November 2009 show.

Cowell was inspired by the Three Tenors when he created the quartet. This version has an interlude in the middle that features bagpipes.

16. “Amazing Grace” performed by The Pipes and Drums and the Military Band of the Royal Scots Dragon Guards

Since “Amazing Grace” is one of the best-known hymns of all time, it’s not necessary to play a rendition that includes someone singing the lyrics. This performance is performed with only the bagpipes.

Andre Rieu is a Dutch violinist, conductor, and prolific performer. He plays violin in his performance of “Amazing Grace.” A group of bagpipers also accompanies him and the rest of the orchestra.

How Sweet the Sound

“Amazing Grace” would be a perfect choice of songs to play at a funeral. Since most are familiar with the words and tune, you may choose to have the attendees sing the song in unison.

Consider using a studio recording at a funeral. The live performance may include applause at the end and may be disruptive for a funeral. You may also consider the length of the performance. Hearing a live performance of someone stretching out each note is more meaningful than listening to the same song through speakers at a chapel.

You may be struggling to pick the best funeral song for either you or your loved one. If you are picking your own funeral music, you may struggle with the idea of choosing a sad song because you may not like the idea of your loved ones being upset at your funeral. Even if you are a spiritual person and you are looking forward to heaven, understand that somber music is traditional for a funeral. It’s what people expect.