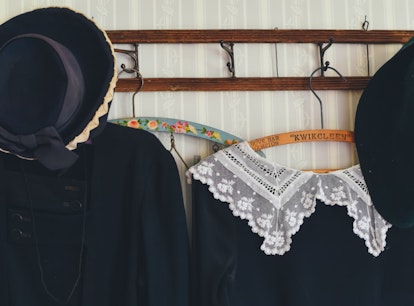 The Amish are a conservative group who originally came to America to escape religious persecution. They’re best known for their traditionalist lifestyle and rejection of modern technology. The Amish protect their beliefs by remaining separate from the rest of the world who they refer to as “the English.”

There are large Amish communities in different parts of the U.S., and the Amish people have built their lives on generations of traditions and rituals. One of the most interesting customs is the way they treat funerals. Because the Amish put God and the good of the community above the individual, their funeral practices are very different from those were familiar with in the modern world.

In this guide, we’ll explore Amish funeral customs and what to expect at a funeral. Understanding Amish funeral practices is a great way to gain insight into their traditions and beliefs.

COVID-19 tip: Amish communities shun the use of modern technology, which would make hosting or attending a virtual funeral impossible. But if you're only incorporating some aspects of an Amish funeral, you can still host the event partially or entirely online. We recommend using an inclusive service like GatheringUs to simplify the process.

Because of this, there is no praying for the deceased after they’ve passed. The Amish believe praying after death is a pointless practice since their judgment has already happened once they moved on. Instead, the focus is on the goodness of God. While death is a solemn occasion, it’s also seen as a necessary part of life. The Amish aren’t preoccupied with what happens after death.

In Amish tradition, it’s uncommon to express grief publicly. Funerals are large affairs, often attracting hundreds of community members. While the family grieves privately at home, it’s uncommon to see outward expressions of sorrow in public even at a memorial service. Again, this relates to the Amish belief that death is a certainty of life.

Funerals are a marker for the end of one’s Christian life. Since all individuals are at the mercy of God, there is no speculation about one’s final resting place. For the Amish, death is very matter-of-fact, and this is clear in their traditions.

Start planning
» MORE: Create a FREE will in only 10 minutes

The funeral service itself often takes place in a church. However, some Amish communities do not have churches, so the service would take place in either a barn of a family members’ home. In addition to the funeral service, there is also a less formal viewing of the body that takes place in the home of the deceased person or a relative’s home.

Aside from the funeral, a small graveside service takes place. There are usually three locations since the Amish believe in three viewings of the body. The first would be at the house of the deceased, the second in a church (if available), and the final viewing at the gravesite. All of these locations are within the Amish community. The Amish do not leave their close-knit communities for funeral services.

Once an Amish person has passed away, they are usually buried exactly three days after his or her death. Once the person has been washed and dressed in clothes made by the family, the body is ready for viewing. The first viewing is in the house of the deceased. Friends and family will stop by to pay respects to the family.

The second service takes place at a church if the community has one. This is the largest service, and the majority of the community will attend. Finally, there is the last viewing of the body at the gravesite. When the body is buried in the ground, the service is over. Close family will return to the deceased’s home for a meal.

The Amish pay tribute to God and the community during their funeral services. The hymns and songs are usually taken from the Ausbund. The Ausbund is a hymnal with centuries-old songs originally from Germany.

The Ausbund is actually the oldest songbook in the world that’s still in use today. Though this isn’t considered a holy book like the Bible, this is the collection of funeral songs that the Amish use during a service.

Popular hymns in the Amish tradition include:

It’s not uncommon for these hymns to only be in German. Singing is an important part of the Amish tradition, as it’s a way to deepen one’s connection with God. Because of this, singing is a cherished part of funeral traditions.

Other rituals and customs

Many unique customs go along with Amish funerals, with the majority focused on the concept of simplicity before God. After death, family members dress the deceased in plain clothes. The men are typically dressed in white pants and shirts, while women usually wear a long white dress. It’s important that the clothing is plain and unadorned.

The coffin is also simple. It’s handmade by the Amish community, usually out of pine. There are no handles or coating on the coffin, and there is no padding inside. The body is only embalmed if required by the state for burial. The grave itself is dug by hand.

Even the room in which people view the body is plain. Family members remove all furniture except for the coffin. Only when it’s empty of all decoration is it ready for viewing. Amish people are usually buried in all-Amish cemeteries, but they might also share the cemetery with Mennonites. These traditions are all a way to bring people closer as a community and to keep the focus on God, not material things.

There is proper etiquette to know about Amish funerals. When it comes to what to wear to a funeral, it’s traditional to wear all black. The immediate family of the deceased will actually wear black for an entire year. This is a visual representation of their grief since in Amish communities, it’s not appropriate to show outward emotion. As a funeral guest, it’s important to dress conservatively.

During an Amish funeral service, it’s important to not praise the deceased or talk about his or her accomplishments. The appropriate way to offer condolences is to be respectful and to give any praise to God.

There are no eulogies given at an Amish funeral, and any comments about the person’s soul being in a better place are not used. In the Amish tradition, this is God’s will alone.

It is not considered respectful to bring flowers or any type of gift to the funeral. Since these are simple affairs, any type of decoration distracts from the grace of God. After the burial, mourners are usually welcome back to the home of the deceased for simple Amish food.

Guests are welcome to bring food, but no other gifts are acceptable. From there, it is common for family and friends to visit the family every Sunday for up to a year after the passing of a loved one.

The Amish have very closed communities, and they generally keep their distance from outsiders. However, in recent years, the Amish in some parts of the country have begun to step out into the community. Many Amish people now own local businesses and interact with “English,” or non-Amish folks, throughout their day-to-day lives.

Because of this, outsiders can attend Amish funerals if they personally know the deceased. Because hundreds of people from the community attend these funerals, it is usually easy to attend as long as the memorial is at a church or barn. If you’re attending an Amish funeral as an outsider, pay close attention to the local customs, dress, and etiquette.

The Amish burial customs are very straightforward. As mentioned before, unless the state requires embalming, the body appears as did is at the time of death. No makeup is applied to the face of men or women's bodies, and the coffin itself is plain.

During the graveside funeral, there is one final prayer before closing the coffin. After the funeral service, men fill the grave with spades. The only information etched on the tombstone is the name, birth date, and death date. In some Amish communities, there are no names on the plots at all.

The entire burial ceremony takes approximately two hours, and it’s delivered in Pennsylvania Dutch, an Amish language. This is a time to focus on respecting the deceased, and outward emotional outbursts are not shown during the burial ceremony.

Unlike Christian funerals, Amish funerals are simple affairs. During the three day process, friends and family of the deceased quietly reflect on the deceased while paying their respects to God. While these practices might seem impersonal on the outside, they are an intrinsic reflection of Amish values.

You might discover unique traditions depending on the Amish community in particular, but the framework above rings true for the majority of belief systems. Having a clear-cut way to honor the deceased while celebrating God bring peace to families in their time of mourning.

Amish funerals shun modern practices and focus on old-world traditions. The community all comes together to offer prayers and sermons. With several hundreds of community guests attending each funeral, this practice shows how important death and the return of the soul to God is within the Amish tradition.