Have you ever struggled to come up with the right words to describe something? It’s understandable — English is full of words that mean the same exact thing.

Sure, different words may have the same meaning, but the tone of the words may vary slightly. For example, the denotative meaning (or dictionary meaning) of the words “house” and “home” are nearly identical. The connotative meanings of the two words differ, though. The term “house” may make you think of a brick-and-mortar structure and the word “home” may make you think of warm cookies and your mom.

As you plan the funeral service for a loved one (or for yourself), you may consider the importance of word choice. While each of these terms may have the same denotative meaning, their connotative meaning may vary a bit. Let us help you choose the right word for the type of service you would like to plan.

Other Words for Funeral Services 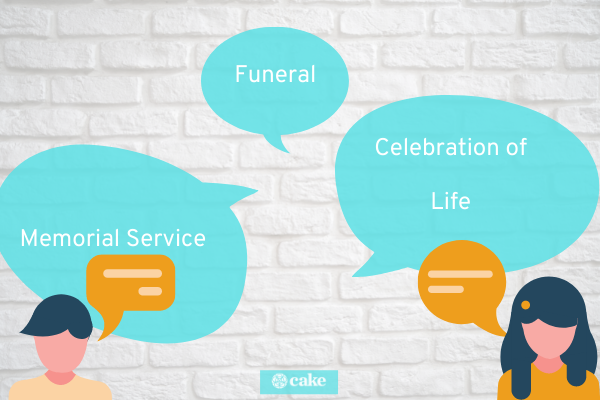 The funeral industry has experienced changes in word choice throughout the centuries. Many of these changes were done to try to soften the harshness of death. For example, “coffins” are more commonly referred to as “caskets” and “morticians” are frequently called “funeral directors.”

Let’s learn about the difference in word choice for funeral services and what attendees would expect when attending one type versus the other.

The word “funeral” has been around since the early 1500s. The Merriam-Webster Dictionary defines it as “observances held for a dead person, usually before burial or cremation.”

Most people attending a funeral would expect a formal service where the body is present.

In general, “memorial service” is another word for funeral. For example, let’s say a coworker says she’s going to a memorial service. You would understand that someone she had a connection with had died.

But many times, “memorial service” is used to describe a funeral where the body will not be present, either by choice or by circumstance.

A memorial service may also be held when it’s impossible to hold a funeral around the time of death. The delay may be weather-related or because several key family members cannot get back in time for services.

Sometimes memorial services are held for a broader audience. For example, when a celebrity dies, there may be a private funeral for family members and close friends. But a memorial service may be held for the general public to attend.

Some people may use the term “celebration of life” interchangeably with the word “funeral” and others see the two services in a completely different light.

For some, a “celebration of life” is a literal celebration. It’s a highly personalized service where stories and laughter are shared. The person’s death is mourned but sorrow is not the focus of these celebrations.

Celebrations of life may occur weeks or months after a death. They may take the place of a traditional funeral or they may be held in addition to a formal funeral. Funerals are typically held in funeral homes or places of worship but a celebration of life may occur in a public place or a person’s home.

Other Words for Wakes 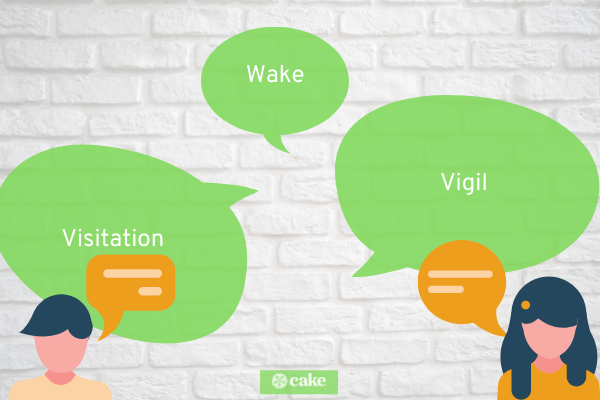 You know that various cultures, religious groups, and regions commemorate the passing of a person differently. In some communities, it’s common for that commemoration to last two days, with three distinct events occurring over 48 hours. One of those events may be referred to as a wake.

Let’s learn what you should expect when attending a wake and other words that may have a similar meaning.

A wake generally occurs before a more formal funeral service. The body of the deceased is usually present, and family and friends can use the wake as an opportunity to say a private and last goodbye to the departed.

Besides having the opportunity to view the body, wake attendees also use the time to express sympathy to the members of the family.

Members of the Catholic community commonly use the word “wake.” During the wake, socializing may be paused when the rosary is recited.

“Visitation” is synonymous with the word “wake.” Often, the body or cremains may be present, and members of the community will have the opportunity to express condolences to the members of the family.

Usually, a vigil takes place before a formal funeral service, usually a Catholic Mass. Although vigils may have a social element involved, there may also be a time set aside for prayers, readings, and blessings.

Other Words for Receptions 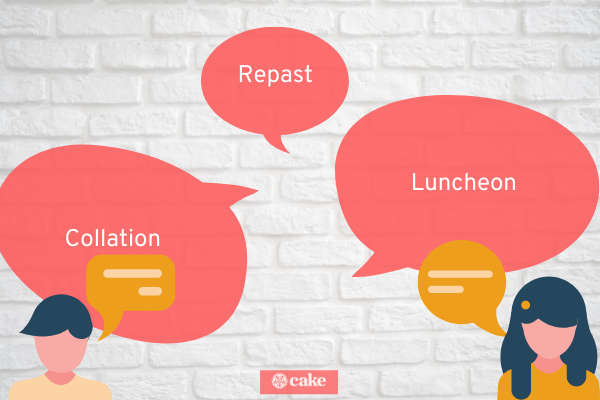 Depending upon the family’s traditions, food may be served during the wake or visitation. Usually, it is not a formal sit-down meal. Instead, food is available for those who wish to have a quick bite during the sometimes hours-long event.

Other times, separate events are held with the sole purpose of feeding the mourners. Here are the most commonly-used words to refer to a reception held after a funeral.

The term “repast” means “to eat.” It sometimes is pronounced without the final “t,” but the meaning is the same.

A repast usually occurs after a formal funeral. Sometimes it’s held in a person’s home when friends and family gather to eat the casseroles that the members of the community provided. Repasts may also be held at restaurants.

Repasts may also be held in the common room at places of worship. The food may be catered in or provided for by the members of the faith community. Repasts may be reserved for only family members and close friends, or all mourners may be invited to eat.

“Collation” means “a light meal.” The term is not commonly used in the U.S., though you may hear the word used in some specific populations.

Struggling with the right word to use for a light meal served after a funeral? You may consider using the word “luncheon.” If coffee and sweets are being served, you can use the word “refreshments.”

Pick the Right Word for Your Situation

Many times, your word choice is based on the terms used in your social group. They vary among regions, religious groups, and cultural groups.

As funerals become more personalized, it will be interesting to see how the words to describe them change over time. There may be a new term brewing out there that will increase in popularity over the next few years.