We’ve all heard the phrase ‘ashes to ashes, dust to dust,’ but what does this actually mean? As one of the many euphemisms for death, it’s not always clear how this phrase applies to humanity and our ever-present mortality.

In reality, this phrase highlights what happens to all bodies during burial ceremonies. Whether your body is cremated or buried within this earth, you will return to ashes and dust. This might sound scary and intimidating at times, especially when coupled with the question of why we die.

In reality, the phrase ‘ashes to ashes’ carries a lot of beautiful symbolism. Returning to ‘ashes’ and ‘dust’ isn’t something to fear. It’s a phrase with a biblical origin dating back to the creation of man, and it honors the cycle of life as the meaning behind everything we hold close.

Let’s take a step back through time, literature, and popular culture to discover the real meaning behind ‘ashes to ashes, dust to dust’ and how it applies today.

Tip: If you're looking for something very unique to hold a loved one's ashes you can custom order an urn from a store like Foreverence. You can even turn your loved one's ashes into a real diamond with Eterneva or into cremation stones with Parting Stone.

What ‘Ashes to Ashes, Dust to Dust’ Means 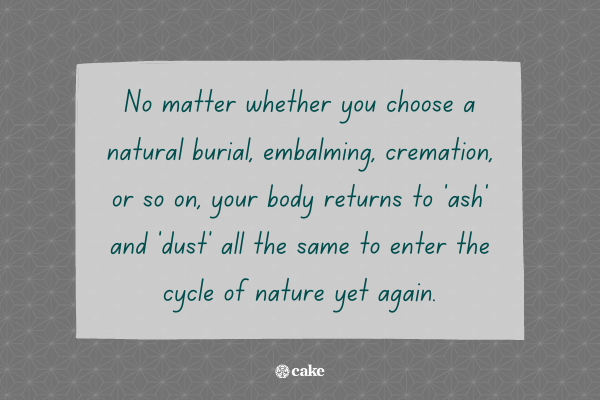 On the surface, ‘ashes to ashes, dust to dust’ paints a bleak picture. The words ‘ash’ and ‘dust’ have negative connotations, but don’t get the diction twisted. In simple terms, this phrase reminds us that we all began as dust, and we will return to dust again when our time finally comes.

While it sounds remarkable, humans are—at their essence—dust. We’re made of the same stuff as stars, nearly every element in the human body being made in stars and supernovas. It sounds like the stuff of science fiction, but it’s the true reality we live in.

Our bodily elements (hydrogen, carbon, calcium, etc.) date back to the beginning of the universe over 13 billion years ago. Though you might feel young, your body’s elements are as ancient as time itself.

With that in mind, eventually, when we die, our bodies return to these basic elements within the earth. No matter whether you choose a natural burial, embalming, cremation, or so on, your body returns to ‘ash’ and ‘dust’ all the same to enter the cycle of nature yet again.

Perhaps, centuries from now, your same elements will find themselves a new home within other organisms, mountains, or even a star in a galaxy far, far away.

Origin of ‘Ashes to Ashes, Dust to Dust’

The infamous ‘ashes to ashes, dust to dust” originates from Genasis. Located within King James Bible in the scene when Adam and Eve are finally cast from the Garden of Eden. The phrase reads:

“In the sweat of thy face shall thou eat bread,
Till though return unto the ground;
For out of it wast thou taken:
For dust thou art,
And unto dust shalt thou return”

Later, the word ‘dust’ turned into ‘ashes’ in popular funeral prayers and literature. This began as a Christian phrase used to remember that God always has a plan. Though you’re to return to dust, you’re also to be resurrected by Christ himself when the time comes. It’s a form of comfort that we all meet the same afterlife with God, regardless of social status or burial service.

Over time, this phrase lost much of its Christian meaning. Though it’s still commonly used within the church, it’s also a popular symbol in literature and storytelling throughout the world. You’ll hear these words in songs about death, poetry, and even modern film and TV.

Where You’ll Find ‘Ashes to Ashes, Dust to Dust’ 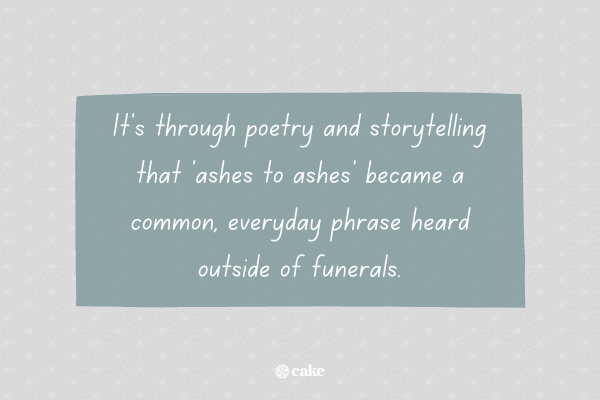 As mentioned above, ‘ashes to ashes, dust to dust’ is more secular today than ever before. Though it still contains its origin within the Christian narrative of original sin, it’s also much more than that. It’s an ever-present reminder that life is only borrowed time.

We all must return to dust at some point, so why not live life to the fullest while you can? These examples in pop culture, society, and so on show that this symbol is just as easy to find as death itself. Perhaps it’s our fear of the unknown that keeps the ‘ashes to ashes, dust to dust’ phrase so close to our lives?

It would be hard to share where to find this phrase without first talking about literature. It’s through poetry and storytelling that ‘ashes to ashes’ became a common, everyday phrase heard outside of funerals.

Since the Middle Ages, this phrase has been evoked through numerous symbols of ash, dust, and death. Shakespeare himself brings this imagery to life after he murders Polonius. When asked what he did with the body, he says, “Compounded it with dust, whereto ‘tis kin.” In other words, he’s gotten the body dirty, but his body is already nothing more than ash and dust, so it’s no matter.

A more modern interpretation of ‘ashes to ashes, dust to dust’ is in the poetry of Sylvia Plath. Plath’s “Lady Lazarus” grapples with death and suicide, alluding to ash and dust several times. She writes, “Ash, ash—you poke and stir,” hinting that there is nothing more to her than ash and flesh. From there, in death, she rises “out of the ash.”

Another modern poet, T. S. Eliot’s famous epic “The Waste Land” relies on dust to make one of its most powerful statements. He writes about the greatest fear of all, the fear of dying:

Since the early days of English and American literature, ash and dust have appeared to remind readers that death is always on the horizon. However, it’s often used with power, intention, and even humor. It’s not something to be feared.

Not only do many historical songs center around the idea of ‘ashes to ashes, dust to dust,’ but also many modern songs. David Bowie even has a song named “Ashes to Ashes,” though he pokes fun at the phrase. His lyrics read, “Ashes to ashes, funk to funky” to refer to his fight against drug abuse and personal demons.

The band The Civil Wars has a song titled “Dust to Dust” about building your heart after a heartbreak. All of those old feelings of the past are nothing more than “dust” at the end of the day.

This common trope of ‘ashes to ashes, dust to dust’ is also present in TV and film. It’s commonly found in crime and mystery dramas, but it isn’t limited to this genre. You’ll find evidence of this circle of life and death in just about anything you watch on the big or small screen.

The most well-known TV show with this phrase was Ashes to Ashes, the BBC drama series. However, ‘ashes to ashes’ was also used in the TV show episode title for Star Trek: Voyager, CSI: Miami, The Originals, and Only Fools and Horses.

To Dust We Return: The Cycle of Nature

Everything was once dust, and everything returns to death yet again. This is the only certainty of life, and it’s not something that should get you down. When you understand and recognize that we’re all built of stardust and everything that makes up the universe, life feels all the more magical. In this big, wide universe, we aren’t so alone after all.

The phrase ‘ashes to ashes, dust to dust’ might have found its start in the original story of Adam and Eve, but it’s truly a tale as old as time itself. Today, it finds its way in popular culture, media, and literature. It is a constant reminder that we are made of the stars themselves, and these elements are as ancient and immortal as existence.