Like many other countries, Australia has a special day of observance for honoring the men and women that fought and died for their country. Each person stops their normal routine to solemnly remember the brave and courageous heroes that gave the ultimate sacrifice.

Whether you live in the land down under, you plan to visit, or you have Aussie friends, learning about Remembrance Day will help you honor and respect the fallen heroes of Australia.

What Is Remembrance Day in Australia? 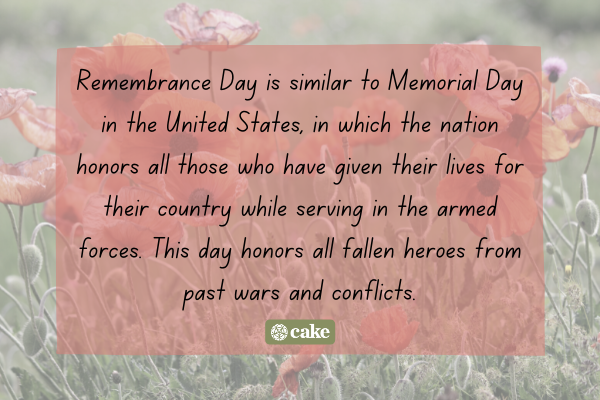 The entire country of Australia comes together to honor the men and women who fought and died in wars and conflicts on Remembrance Day. The day originally marked the official end of World War I and served to memorialize the World War I dead. After World War II, however, the day became an opportunity to remember the ultimate sacrifice of all service members over the years.

Remembrance Day and Anzac Day both offer opportunities to honor the men and women who have fought on behalf of their nation. Though the two days share some similarities, they are distinct and unique in what each stands for. Together, these two days are for honoring veterans and fallen soldiers.

Remembrance Day is similar to Memorial Day in the United States, in which the nation honors all those who have given their lives for their country while serving in the armed forces. This day honors all fallen heroes from past wars and conflicts. Remembrance Day offers numerous traditions and customs that people across the country uphold.

Anzac Day is similar to Veteran’s Day in the United States and it honors the men and women who have served in the military by saying, "Thank you for your service." It also recognizes the sacrifices they made to serve their country and honor them in a special way through parades, marches, reunions, celebrations, and other events.

Fast Fact: Anzac Day originally marked the day that Australians landed on the Gallipoli Peninsula at the beginning of World War I.

When Is Remembrance Day?

Remembrance Day commemorates the end of World War I, or Armistice Day, which landed on November 11, 1918. Ever since, November 11 has been set aside as a day to solemnly remember and honor those who gave the ultimate sacrifice for their country.

Remembrance Day is on the following days in the coming years:

How Did Remembrance Day Get Started?

The moment that World War I officially ceased almost instantly became associated with remembering those who fought, served, and died. On the first anniversary of the armistice, in 1919, King George V declared that the commonwealth should stop all activities and stand in silence to remember the fallen during the commemoration activities. 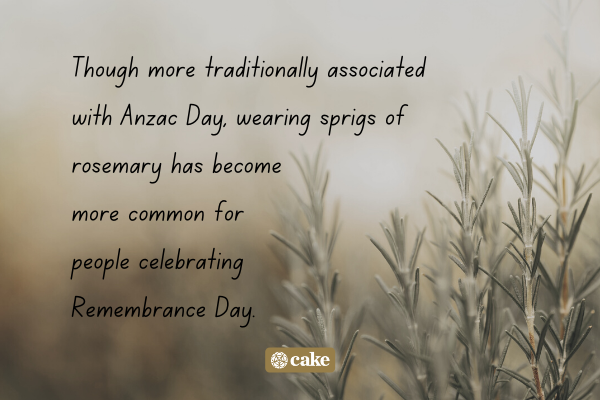 The tradition of flying flags at half-mast first started at sea. When sailing ships with important people on them were out at sea, the surrounding ships would lower their sails as a sign of honor and respect. Lowering their sails would slow the smaller ships down and allow the VIP vessel to come alongside for boarding if desired.

The gesture of honor eventually changed from lowering sails to lowering the ship’s flag and was adopted on land as well. Today in Australia during Remembrance Day, government offices and military posts will lower the Australian flag to fly at half-mast in honor of all those who gave their lives while serving their country.

During large and small gatherings alike, poems are frequently read to help those gathered imagine what it would have been like to fight and give of their lives while serving on the foreign field.

One of the most popular poems read during Remembrance Day is “In Flanders Fields.” In it, poet John McCrae describes the war dead that remain on the battlefield. He encourages the reader to remember those that gave their lives with lines like:

“We are the Dead. Short days ago
We lived, felt dawn, saw sunset glow,
Loved and were loved, and now we lie
In Flanders fields.”

For Australians, the significance and meaning go even deeper since rosemary grows wild on the Gallipoli peninsula — the place where the Australian armed forces valiantly fought for eight months with Turkish forces during World War I, beginning on April 25, 1915.

The symbolism of red poppies goes back to the first world war where this bright flower was the first to break through the blood-soaked, war-ravaged fields in Belgium and Northern France. They almost immediately became a symbol of the blood and sacrifice of those who died in battle.

During a battle early on in the war, the sight of poppies stirred Lieutenant Colonel John McCrae to write the now-famous poem, “In Flanders Fields.” The lines of his poem attach vivid imagery and deep symbolism to the poppy with lines like:

“In Flanders fields the poppies blow
Between the crosses, row on row,
That mark our place; and in the sky
The larks, still bravely singing, fly
Scarce heard amid the guns below.”

During and following World War I, the poppy became a symbol of the bravery, dedication, and sacrifice of soldiers who gave their lives on the battlefield.

On the final day of World War I, the weapons of war fell silent after nearly four years of deafening thunder. The official signing of the armistice occurred during the 11th hour of the 11th day of the 11th month of 1918. One year later, two minutes of silence were observed in honor of those who died in the war during a commemorative celebration.

In a request from King George V, the entire commonwealth was asked to observe a “complete suspension of all our normal activities at the eleventh hour of the eleventh day of the eleventh month that in perfect stillness the thoughts of everyone may be concentrated on reverent remembrance of the Glorious Dead.”

The tradition continued on and today, the entire nation falls silent for one to two minutes at exactly 11 o’clock in the morning on Remembrance Day. These minutes of silence honor those who died during World War I along with every member of the armed forces that have perished in battle since that day.

Flowers have long been placed on gravesites or near sites where the deceased were laid to rest. Over time, wreaths became a popular item to lay on headstones, mausoleums, and large memorials. Today’s wreaths are a nod in symbolism to the laurel wreaths given by the ancient Roman government to victors and the especially brave during times of war.

Wreaths placed at graves or memorials in Australia can contain any number of floral arrangements. Two notable plants you’ll see in many wreath arrangements include rosemary and poppies.

Whether you’re a native Australian or not, you may not know several things about Remembrance Day.

It was originally called Armistice Day

Remembrance Day was first called Armistice Day in honor of the day the armistice was signed and World War I officially concluded. The original name wasn’t changed until 1997 when interest was renewed in the day and the nation decided to honor all war dead.

It was established by King George V of England.

At the time of World War I, Australia was part of the British Empire. Decisions made by England’s reigning monarch, therefore, carried weight. When King George V made a proclamation that the country would celebrate Armistice Day on November 11, Australia adopted the day as well.

Many Australians travel to foreign battlefields on Remembrance Day.

It’s a well-known fact that thousands of Australians died on the battlefield and never made it home for burial. Because of this, many cemeteries and memorials along the Western Front honor the fallen. Remembrance Day has become a day in which Australians travel to these battlefields and cemeteries to pay respects to the fallen.

The famous poem almost got thrown away.

The famous poem, "In Flanders Fields," was written by Canadian Lieutenant Colonel John McCrae. After he wrote it, he threw it away. A fellow soldier saved it and the rest, as they say, is history.

The minutes of silence were suggested by an Australian.

Edward Honey, an Australian journalist working on Fleet Street, suggested that the fallen heroes of World War I be honored with two minutes of silence during Remembrance Day. The suggestion was then made to the British Cabinet by a South African statesman.

When the first anniversary of the armistice came around, King George V personally requested that the commonwealth nations observe two minutes of silence in honor of the fallen.

Remembering Those that Gave All

Remembrance Day is a solemn time to honor and remember the men and women who fought and died in the service of their country. While their lives may have ended on the battlefield, their courage and bravery will continue to live on through the centuries.