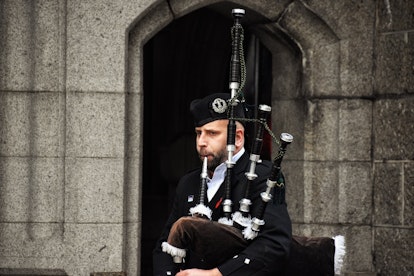 Bagpipes can be one of the most expressive and mournfully melodic instruments out there. Bagpipes have been traditionally featured in many funerals, from Celtic to Irish services to military services as well. Many songs rely on bagpipes to sound just right at a service. With the prevalence of bagpipes at funerals, many people have become familiar with songs such as “Danny Boy” and “Amazing Grace” as the traditional tunes to play.

If Irish heritage was important to you or your deceased loved one, choosing the perfect song can be hard. Many Irish funeral songs can sound like the opposite of a poetic, mournful tune. Instead, the melody can be often wrapped in the lyrics of a love song.

With few exceptions, most Irish funeral songs may sound romantic. But even so, we have provided a list of the most traditional picks for a bagpipe song at a funeral below. (If you want some additional help with all of the complexities of losing a loved one, from choosing funeral music to finding grief support, check out our post-loss checklist.)

COVID-19 tip: If you're hosting a Zoom funeral using a service like GatheringUs, test your audio before the ceremony, so you can anticipate any day-of-funeral issues. Make sure to create a unique playlist for the digital reception, wake, or other gatherings and send the playlist URL to the guests with the funeral thank-you cards.

This song focuses on making death less scary. Based on the “Largo” song composed by Antonin Dvorak, the lyrics and tune offer simple and heartening advice to those left behind. The song’s simple words were written by Dvorak’s pupil, William Arms Fisher.

It's not far, just close by; Jesus is the Door; Work all done, laid aside, Fear and grief no more.

2. "Flowers of the Forest" by Fairport Convention

This song is about the shift from joy to grief. Before, there were ‘lassies a-lilting.” Now, they are mourning.

“I've heard the lilting, at the yowe-milking, Lassies a-lilting before dawn o' day; But now they are moaning on ilka green loaning; "The Flowers of the Forest are a' wede away".

The historical significance of this song is represented by Bonnie Prince Charlie. This song is played at funerals to commemorate history.

“Speed, bonnie boat, like a bird on the wing, Onward! the sailors cry; Carry the lad that's born to be King Over the sea to Skye. Loud the winds howl, loud the waves roar, Thunderclaps rend the air ..."

4. "Oft in the Stilly Night" by Sarah Brightman

The singer remembers old memories, ones that happened when her loved ones were still with her. Now, she admits that her heart is broken.

“Oft, in the stilly night, Ere slumber's chain has bound me, Fond memory brings the light Of other days around me; The smiles, the tears, Of boyhood's years, The words of love then spoken; The eyes that shone, Now dimm'd and gone, The cheerful hearts now broken!”

“Amazing Grace, How sweet the sound / That saved a wretch like me / I once was lost, but now am found / T'was blind but now I see / T'was Grace that taught my heart to fear / And Grace, my fears relieved …”

This is a song about being left behind by someone you love. The song was actually written by an English lawyer The singer pleads with Danny to return, no matter how long it takes.

“Oh, Danny boy, the pipes, the pipes are calling From glen to glen, and down the mountainside.

The summer's gone, and all the roses falling, It's you, it's you must go and I must bide. But come ye back when summer's in the meadow, Or when the valley's hushed and white with snow …”

7. "Scotland the Brave" by Robert Wilson

This is a song of national pride. It’s often played at funerals for patriotic people.

8. "A Fairytale of New York" by The Pogues

This is traditionally known as a Christmas song. It’s played for people who are far from home, though. If your loved one was born in Ireland and buried in the States, this is a great choice.

A popular cover of this song was performed by Celtic Woman. It’s a song about going home to your one true love.

“I wish I was in Carrickfergus / Only for nights in Ballygrand / I would swim over the deepest ocean / The deepest ocean, my love to find / But the sea is wide and I cannot swim over / And neither have I the wings to fly / If I could find me a handsome boatman …”

10. "She Moved Through the Fair" by Padraic Colum

This traditional Irish folk song at first glance, may have nothing to do with funerals. It’s still played at many funerals because of its somber mood.

“My love said to me / My Mother won't mind / And me Father won't slight you / For your lack of kind / Then she stepped away from me / And this she did say / It will not be long love / 'Til our wedding day.”

This mourns the past memories of a time that was more familiar. “The Rare Ould Times” is a famous ballad that has been recorded many times, including by the band, The Dubliners. If you’re remembering times gone by, this is the perfect choice.

12. "On Raglan Road" by The Dubliners

Originally written as a poem by Peter Kavanagh in 1948, the poem was set to music when Kavanagh met one of the band members of The Dubliners later on in life. This poem describes love turning to grief, at the ‘dawning of the day’.

“On Raglan Road on an Autumn Day, / I saw her first and knew / That her dark hair would weave a snare / That I may one day rue. / I saw the danger, yet I walked / Along the enchanted way / And I said let grief be a falling leaf / At the dawning of the day.”

13. "The Mountains of Mourne" by Percy French

Another old Irish folk tune, this song has been covered by many musicians, including Don Mclean. The song lyrics focus on the feeling of being homesick. If you’re missing the person who made your house home, this is perfect.

“Oh, Mary, this London's a wonderful sight / With people here working by day and by night / They don't sow potatoes nor barley nor wheat / But there's gangs of them diggin' for gold in the street / At least when I asked them, that's what I was told / So I just took a hand at this diggin' for gold / But for all that I've found there, I might as well be / In the place where the dark Mourne sweeps down to the sea.”

14. "Down by the Salley Gardens" by Juno Lee

This is a poem by William Butler Yeats that was turned into a song.

15. "My Lagan Love" by Joseph Campbell

This famous song, written by a late 19th-century poet, focuses on love and loss, all wrapped into a painful bow. “My Lagan Love” has been covered by dozens of famous Irish singers, including Sinead O’Connor, Kate Bush and Charlotte Church.

“Where Lagan streams sing lullabies / There blows a lily fair. / The twilight gleam is in her eye, / The night is on her hair. / And like a lovesick lenashee / She hath my heart in thrall. / No life have I, no liberty, / For love is Lord of all./ And often when the beetles horn / Has lulled the eve to sleep …”

Many people may be irritated by the high pitch and air from bagpipes. In an arsenal of westernized instruments, they can sound odd. Their cultural significance, though, makes them a great choice. They can add sorrow to love songs that would otherwise be inappropriate.

More than that, though, they commemorate Irish and Celtic history in a way that no other instrument does. If you're looking for more funeral music, check out our picks for the best funeral songs.