Every stage of grief is an attempt to find solid ground after a painful loss. You may cycle through denial and anger before eventually trying to bargain your way out of grief.

When your anger makes you weary, you may find yourself saying, “what if,” or, “if only,” statements. This is the bargaining stage, the third stage of grief as described by Elisabeth Kübler-Ross. Kübler-Ross was a Swiss-American psychiatrist who defined the grief process for terminally ill people in five stages.

The bargaining stage of grief can feel like despair and anxiety rolled into one. Your mind is trying to wrestle with the truth, learning to let go of one reality and move toward another. This stage is defined by your struggle to regain a sense of control as you grieve.

This guide can help you understand what the bargaining phase is and how to help you identify it in several scenarios.

Definition of Bargaining Stage of Grief 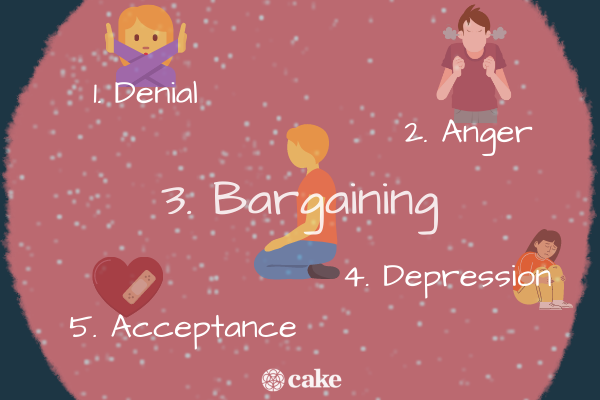 Bargaining is your mind’s way of pushing off reality. If you allow your loss to sink in, you admit that it’s real and final. Your mind is stubborn, so it scrambles and fights off the truth instead.

As you bargain with yourself or the universe, you may try to explain the loss or resolve your emotional pain in several ways.

What happens before the bargaining stage of grief?

Before bargaining, you’re likely to feel angry. You may become filled with the energy of anger in an attempt to feel strong again. Anger can feel good because it gives you a way to make things happen. By raging about your loss, you push pent-up emotion forward in a powerful way.

At some point, the anger stage becomes exhausting. You may sense that little has changed, and your loss is no less painful. Feelings of helplessness and vulnerability can creep in. Once the fuel of anger has burned through you, bargaining can feel like the next step.

What happens after the bargaining stage of grief?

After bargaining without success, you may experience a sense of depression and defeat. During this stage, your emotions turn toward the true weight of your grief. Your mood may become serious as you feel the reality of your loss hanging over you.

The bargaining phase is your last stand as you resist acceptance, and the emotional surrender that follows may appear similar to depression. However, going through the grieving process isn’t the same as being diagnosed with a depressive disorder. As you feel sorrow more deeply, you may gradually become more realistic about your loss.

At that point, your sorrowful mood may begin to lift. If your mind and emotions are ready for acceptance, your time in the depression stage may be over.

Examples of When People May Experience the Bargaining Stage of Grief 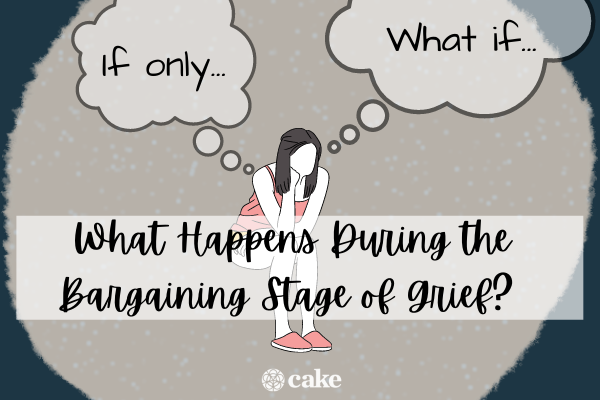 In the bargaining stage of grief, you attempt to postpone your sadness by imagining “what if” scenarios. You may also feel a sense of guilt or responsibility, leading you to bargain for ways to prevent more emotional pain or future losses. The following situations show how the bargaining stage may look in real life.

Sarah’s elderly cat, Ginger, didn’t have much appetite and had been lethargic for several weeks. At first, Sarah brushed it off as Ginger acting her old age. After a week or two, Sarah faced the painful reality that Ginger would pass away soon. One morning, Ginger didn’t wake up, and Sarah knew she was gone. Sarah drove to the vet with Ginger’s remains, but struggled to take Ginger’s body into the office.

Before Sarah got to the vet’s office, she began feeling an intense desire to turn around and go back home with Ginger’s body. As she drove, she felt anxious and thought to herself:

Sarah’s story is also an example of a person moving through stages of grief in a different order, going straight from the denial stage to the bargaining stage. This is a normal and unique grief experience.

Krista and John had been married for almost twenty years, but the last two had been difficult. They fought a lot at first, but eventually, their anger turned into silence. They’d been a much happier couple just a few years ago, but were barely speaking by their twentieth wedding anniversary.

Krista sent divorce papers to John, and he signed with little hesitation. John moved out a few days later, and suddenly Krista was alone. She began to grieve the death of her marriage fully.

Shortly before John moved out, Krista was so angry at him for the hurtful things he said and herself for the mistakes she made along the way. A few days after John left, her anger melted and she wondered if she made the wrong choice. She bargained with herself and the universe with phrases like:

Joseph and his wife Marsha were invited to a party at their daughter’s house one evening. They drove separately because they were on opposite sides of town just before it started. After the party, both Joseph and Marsha began driving home in their own cars when it started raining hard. Marsha slid off the road and struck a tree, killing her at the scene. Joseph made it all the way home before he realized Marsha hadn’t followed him back.

During the bargaining phase of his grief, Joseph felt terrible guilt for driving separately from Marsha. He said to himself:

Marissa had her first pregnancy ultrasound and was excited to see an image of her baby. She had been taking good care of herself and was an avid runner. Marissa kept up her daily running habit running throughout her pregnancy. A week after the ultrasound, she felt intense cramps and was spotting blood. She went to the ER, and the doctor told her she was having a miscarriage.

During the bargaining phase of her grief, Marissa searched for reasons she might have miscarried. She told herself:

Russ had just taken a few days off recovering from the flu. He also had a work trip scheduled for the upcoming weekend, but was still really tired. Russ called his boss and got permission to reschedule the trip to a later date. Two weeks later, his boss announced that his company was bought out and Russ was laid off.

During the bargaining phase of his grief, Russ felt guilt over choosing to reschedule his trip. He said to himself:

As you experience grief or mourning, you may feel like you’re on an emotional rollercoaster. The bargaining stage shows how much the mind grapples with reality during the grieving process. Self-blame, “what-ifs”, and buying time are all part of this phase.

While grieving, you may become overwhelmed with emotion, difficulty sleeping, and other issues. You may find that speaking to a mental health therapist can help you get through it. Don’t hesitate to reach out if you need support dealing with grief.