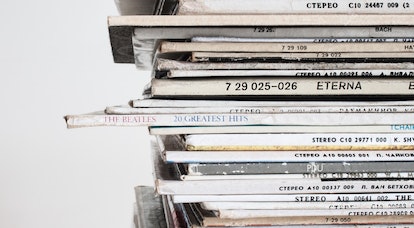 The Beatles are a classic blast from the past. Nostalgic music from one of the most famous rock bands may be just the right heartfelt touch for a funeral. It’s important to find the song that hits on the right chord at a funeral.

You can intersperse some of the Beatles’ upbeat hits with their more meditative numbers to strike the right balance for a memorial service. How do you pick the songs that fit best? You have to account for the Beatles’ time as a band, John Lennon’s solo career, and Paul McCartney’s solo career, too.

We’ve got you covered. Music has great emotional power and can help you work through the grief, create a memorial slideshow, or play during a virtual funeral when a loved one dies — funeral songs don’t always have to be songs associated with death.

COVID-19 tip: If you're hosting a Zoom funeral using a service like GatheringUs, test your audio before the service so you can solve any day-of-funeral audio issues.

The Beatles have a great library of upbeat songs. See if you can spot some of your favorites on this list.

This upbeat song is a gentle reminder that life does go on.

2. “Dear Prudence” from “The White Album”

This song is based on a real-life story about Mia Farrow’s little sister — she refused to leave a meditation hut in India and Lennon and Harrison were tasked with bringing her out.

3. “Twist and Shout” from “Please Please Me”

This song was the crux of an infamous scene in “Ferris Bueller’s Day Off,” a John Hughes movie.

Meant to be a fun children's’ song, the Beatles actually made a movie by the same title in 1968.

5. “I Saw Her Standing There” from “Please Please Me”

This is a nostalgic song that also celebrates the joy of past memories.

6. “With a Little Help from My Friends ” from “Sgt. Pepper's Lonely Hearts Club Band”

One of the Beatles’ most heartwarming numbers, they wrote this song for Ringo Starr to perform. That song is still associated with him today.

The Beatles pieced this song together from one of McCartney’s half-written tunes and one of Lennon’s partial songs.

The Lonely Hearts Club Band was meant to be an alter ego for the Beatles and allowed them to experiment.

The Beatles weren’t always a feel-good band. They were also famous for raging against war and other social issues of the day. Some of their songs were sad reflections that fit a funeral’s mood.

This was a single written by Paul McCartney as an emotional gift to Lennon’s son, who was struggling through his parents’ divorce.

There’s a lot of rumors about this mysterious woman — no one is sure whether she’s real or not.

“Here Comes the Sun” is a song about the hope that comes after a long winter — it’s a perfect funeral song.

This was the Beatles’ musical contribution to the civil rights movement. The Beatles crafted this song to create and support social change.

This sad song holds the record as one of the Beatles’ most-covered songs.

“Let it Be” is one of the Beatles’ most comforting songs.

“In My Life” is a song about appreciating memories, even when they’re painful — this song is all about love.

A song written from the tragedy of the Beatles’ breakup, it’s sorrowful and tragic at the same time.

Paul McCartney is one of the few rock legends from the 1960s who is still a force in pop culture today. Even after the Beatles’ breakup, he continued as a creative powerhouse.

This song is a celebration of the freedom that love between two people can bring — no matter what the circumstances.

This song is a bitter tragedy born from the bad blood produced by the Beatles’ breakup.

“Another Day” is a song about keeping on through everyday life — it’s a bittersweet take on normal days.

“Early Days” is a shrine to memories, both good and bad and is a nostalgic look back at the way things used to be.

McCartney sings about staying with someone you love — even if it’s impossible.

This is a suitable funeral track with an ode to peace and calm.

John Lennon continued churning out hits after his time with the Beatles.

This is a famous song written for Yoko Ono about how one person can become your whole world. It doubles as a sweet memorial song for a loved one.

22. “Watching the Wheels” from “Double Fantasy”

This is a song about the value of slowing down and enjoying your life, no matter what other people say.

Lennon writes about how love clarifies everything — your mind, thoughts, and relationships.

A song about rocky times in Lennon and Ono’s relationship, it’s a testament to how they can weather anything, even Lennon’s jealousy.

This is an optimistic song about imagining a better world, without all the tragedy we experience now. It also provides a touch of hope at the end of a service.

Coming up with funeral songs can be an emotionally draining, difficult task. It’s important to be able to balance between sad and hopeful but when you pick a band with as much nostalgic appeal as the Beatles, you can’t go wrong.