Bereavement leave can be a messy business. You need it when emotions are high and things need to happen quickly. To make it worse, there’s no consistent policy governing bereavement leave. It can feel like no-man’s-land. And you may have no one to guide you through it. To get bereavement leave, think about what you need. Do you have to attend a funeral a few miles away? Or are you in charge of organizing the whole service?

When someone close to you passes away, you need bereavement leave. Unlike vacations and paid time off (PTO), bereavement leave can’t be planned for. Unfortunately, it isn’t the easiest thing to navigate. Employee handbooks are a daunting resource at the best of times. It can be hard to know if your company even offers bereavement leave, let alone what the policy details are. It’s also possible that your employer doesn’t offer any bereavement leave.

Policies for bereavement leave vary by state and company. With such a wild, shifting landscape, how can you figure it out?

Is Bereavement Leave Mandatory in Texas? 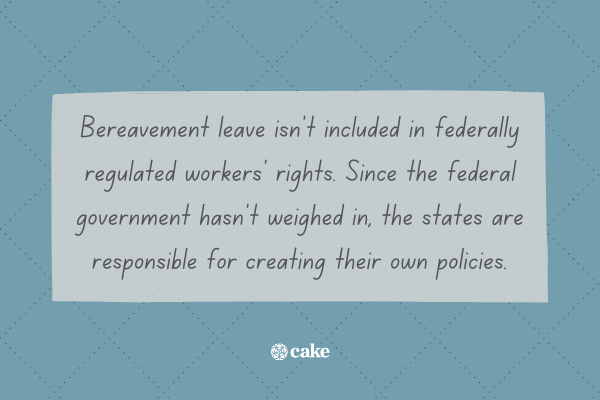 Bereavement leave isn’t included in federally regulated workers’ rights. Since the federal government hasn’t weighed in, the states are responsible for creating their own policies. But, so far, only three states have done that, so employers determine bereavement leave details.

Only certain employees enjoy these policies, though. For instance, some part-time and contract workers are not eligible for bereavement leave. Some companies and laws only provide leave for full-time employees. But others may offer these benefits to all workers.

Even if you’re a full-time worker, caveats still apply. Many employers institute a probation period after hiring a new employee. After this time, you may be eligible for insurance and other benefits. Bereavement leave may count as a benefit. If you’re still on probation, whether it lasts sixty or ninety days, check and see what applies to you. If you’re still in your probationary period, be prepared to discuss your situation with your employer and take a different type of leave, if possible.

Getting Bereavement Leave Through Your Employer 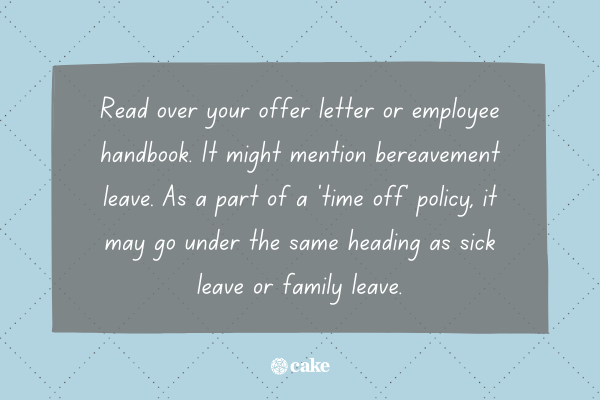 In today’s shifting work landscape, employee benefit packages are very diverse. Employers are trying to lure top talent with exciting perks. As a benefit, bereavement leave is still rare. All employers, though, have an established leave policy. Whether it’s paid or unpaid time off, expectations are set. You know how much time you can take away from the office.

Read over your offer letter or employee handbook. It might mention bereavement leave. As a part of a ‘time off’ policy, it may go under the same heading as sick leave or family leave. If it’s not, there’s a very good chance that bereavement leave isn’t included.

Request your leave with either your supervisor or human resources. It depends on the size of the company. If your company is small, a verbal request to your boss may be enough. If you work at a large company, human resources will have the final say.

You can schedule a meeting with your boss to discuss your situation and needs. After they’ve approved your request, submit it in writing to human resources. Copy your boss on the request. That way, you’ve followed the appropriate channels for requesting emergency time off.

Who typically qualifies as immediate family

Typically, the list created by the U.S. Office of Personnel Management is used to define immediate family. Happily, their list is very inclusive. It includes children, stepchildren, siblings, parents, and step-parents (including in-laws).

The list goes on to include grandparents, foster children, and spouses. The federal definition of spouse includes domestic and same-sex partners.

In a standard situation, bereavement leave lasts between three and five business days. At most, you’re likely to get a week off. If you’re traveling or are responsible for someone’s affairs this isn't enough.

If necessary, determine how much leave you need to take. If it’s more than five days be prepared to take unpaid leave. Try to consider your workload, finances, and employer expectations when making your plan. As difficult as it may be, thinking through all the details can help you make a plan.

If it’s separate from unpaid leave, this may be helpful for you. That way, the purpose of your leave is categorized, instead of being lumped in with general unpaid days off.

Funeral handouts, obituaries, or death notices are all common options. Your supervisor may not bring it up when you request leave. Even if they don’t, collect physical evidence anyway so you can give it to your employer when you return. Being above-board will help ease the process—and it can help build goodwill should you need to take leave again.

Bereavement leave is convenient for no one—you have to scramble to make arrangements during a tragic time. Unfortunately, though, bereavement leave is a necessary part of anyone’s life. If you live in Texas, you'll have to arrange the time off between you and your employer.

If you're a Texas resident and ready to start preparing your own end-of-life planning documents, Cake has Advance Care Planning forms you can download. To help ease your planning, we have all the documents you need in one place.

Disclaimer: The information posted on this site is provided solely for informational and educational purposes and is not legal advice or tax advice. Contact an appropriate professional licensed in your jurisdiction for advice specific to your legal or tax situation.