Ribbons are now a sign of support and awareness. You likely encounter some ribbons and ribbon images throughout your everyday life. They’re commonly found on gravestones, pins, magnets, bumper stickers, and graphics.

Each ribbon represents something different, and the color helps it stand out from other ribbons. While some ribbons are easy to recognize, like the pink ribbon for breast cancer awareness, not all are this well-known.

What does the black ribbon symbolize? In general, black ribbons symbolize mourning, sleep disorders, and anti-trauma. While less common than others, the black ribbon has slowly gained in popularity. Keep reading to learn about what this particular awareness ribbon supports.

What Is an Awareness Ribbon?

Awareness ribbons are simply short pieces of colored ribbon folded in a loop, seen across the globe and especially common in North America.

While they might seem small at first glance, these are a way for individuals to support different causes that mean something to them. No matter what color, the idea behind the symbol remains the same. From notebook stickers to car magnets, it’s all about standing up with a cause to make a difference. Some of the most common awareness ribbons are:

Since there can be multiple meanings for each color, the shade and style of the ribbon are really important. For black ribbons, in particular, the focus is typically on raising awareness about mourning and grief.

Why and When Does a Black Ribbon Symbolize Mourning? 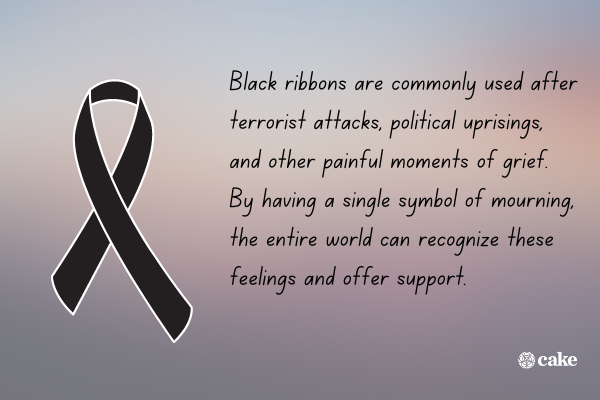 Black ribbons mean many things depending on the wearer’s intentions. There are many symbols of mourning around the world, and black has commonly been used as a sign that someone is experiencing grief. From dressing in all black to tying an armband, all of these things are examples of rituals around mourning.

How exactly does the black ribbon come to symbolize mourning? While wearing black in some form is common in many cultures after the passing of a loved one, this is especially true in Jewish funeral traditions.

One ancient Jewish mourning tradition is known as the kriah. According to history, when Jacob believed his son Joseph was dead, he tore his garments in his mourning. For thousands of years, Jewish people have continued this tradition.

Before the funeral, relatives and family express their grief by cutting their clothes. The cut is made over the heart for parents and on the right side for other family members.

Nowadays, many Jewish people wear a black ribbon that is cut instead of clothing. The ribbon (or the torn clothes) is worn for the seven-day mourning period known as shiva. Some wear their mourning ribbons for an entire month. Today, people of all faiths utilize the black ribbon as a sign of their own mourning.

Placement of the ribbon

While mourning ribbons come in all shapes, sizes, and materials, the most common version is a small ribbon intended to be worn on one’s clothing. To indicate mourning, the individual wears the ribbon on their chest, usually over their heart.

It can be concluded that if someone is wearing a black ribbon over their heart, they’re in a period of mourning. It’s a tangible expression of grief and pain after facing a loved one’s death, and it also shows they might need extra support at this time.

Black ribbons aren’t exclusive to Jewish tradition, though they certainly have a long history within this culture. Here are some other examples of black ribbons symbolizing grief and mourning from other parts of the world:

As you can see, there are many different ways the black ribbon has become a symbol for mourning and honoring the deceased. It’s commonly used after terrorist attacks, political uprisings, and other painful moments of grief. By having a single symbol of mourning, the entire world can recognize these feelings and offer support.

Why and When Does a Black Ribbon Mean Symbolize Cancer or Serious Illness? 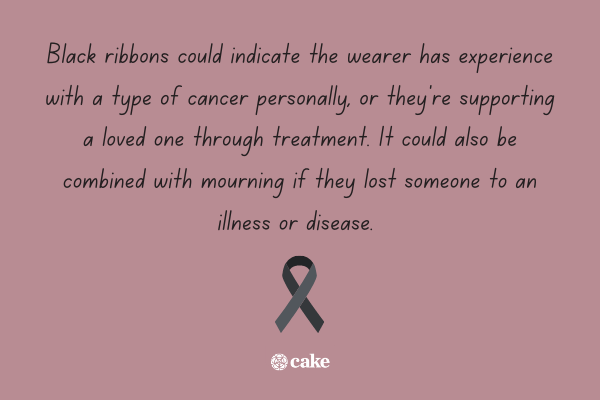 While black usually symbolizes mourning, this isn’t always the case. It also can be a symbol of specific types of cancer. It’s usually worn to represent support for the cause.

It could indicate the wearer has experience with this type of cancer personally, or they’re supporting a loved one through treatment. It could also be combined with mourning if they lost someone to an illness or disease.

The ribbon would similarly be worn over the individual’s heart. However, it’s also common to see these types of ribbons on cars, graves, and other types of graphics. They’re a way to spread awareness and support for those affected by these diseases or illnesses.

What cancers and illnesses do black ribbons symbolize?

Black ribbons can symbolize a variety of different ailments. Some have specific designs or prints as a way to set them apart, but most are all the same shade of black. The specific condition is less important than the support they represent.

Some common meanings include:

Black has become a catch-all for some of the less common cancers, and it’s very much tied with grief and mourning. The only way to know for certain what the ribbon represents would be to speak to the wearer about the ribbon and what it means to them. Luckily, most people wear their black ribbons as a way to spark the conversation and educate others.

Show Your Support with a Ribbon

Everyone experiences grief and mourning in some way. Life is full of emotional moments and obstacles. By observing death in different cultures, it’s possible to see how different parts of the world come to terms with these complex feelings.

One of the most common symbols of grief is the color black. A black ribbon encompasses the vast range of feelings that come along with losing someone. Whether you’re wearing a black ribbon to remember someone important to you or to raise awareness, this one of the many ways people come together in times of crisis.