If you’re interested in learning about Buddhism, the Buddhist afterlife is a good place to start. By studying death in different cultures, not only do you learn about those cultures, but you can also reflect on your own beliefs as well. Buddhist beliefs about death reflect many core tenets of the overall religion.

Keep in mind that scholars have devoted entire books to this subject. A single blog post can’t teach you everything you need to know about the Buddhist afterlife. That said, the following points will certainly shed more light on the unique ways Buddhists traditionally depict the experiences of a soul after life is over (and why the idea of a soul in Buddhism is different from what you might think). 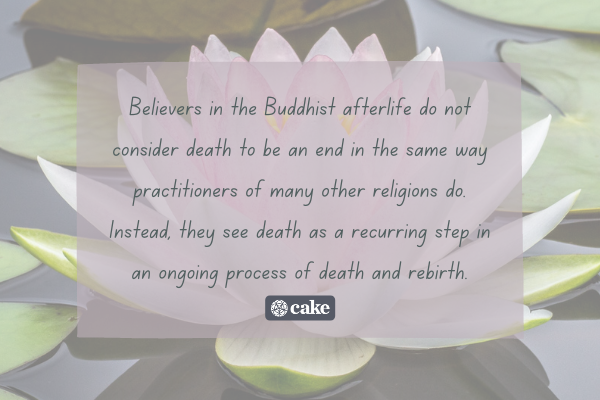 Buddha had many things to say about life and death. But before going further, it’s important to understand that different branches of Buddhism have somewhat different beliefs. The beliefs of Tibetan Buddhists won’t necessarily overlap perfectly with those of Mahayana Buddhists. The information here is merely a general overview.

However, there are some general Buddhist afterlife beliefs and traditions that are relatively consistent across all major branches. This guide will familiarize you with the essentials:

Significance of death in Buddhism

Believers in the Buddhist afterlife do not consider death to be an end in the same way practitioners of many other religions do. Instead, they see death as a recurring step in an ongoing process of death and rebirth.

As the following points will explain in greater detail, in Buddhism, when a person dies, the karma they’ve cultivated throughout their existence determines what happens next.

Do Buddhists believe in heaven and hell?

Buddhists do believe in a form of life after death. However, they don’t believe in heaven or hell as most people typically understand them. The Buddhist afterlife does not involve a god sending someone to a specific realm based on whether they’re a sinner.

Buddhists believe that human beings are born and reborn an infinite number of times until they achieve Nirvana. In Buddhism, the reincarnation process of being reborn is associated with suffering and called samsara.

The way someone acted in a previous life will influence what they reincarnate as. Someone who cultivated positive karma through right actions in life may reincarnate as someone who will enjoy a positive and pleasant life. Negative karma has the opposite effect. Contrary to popular belief, the idea of karma isn’t as simple as “What goes around, comes around.”

There are also Buddhists who believe in two versions of reincarnation. One is the involuntary reincarnation that occurs due to someone’s karma. Another is a voluntary form of reincarnation, in which a person might choose rebirth to achieve some purpose they can only fulfill during life.

If you are interested in learning more about reincarnation in general, discover our list of 16 books on reincarnation. 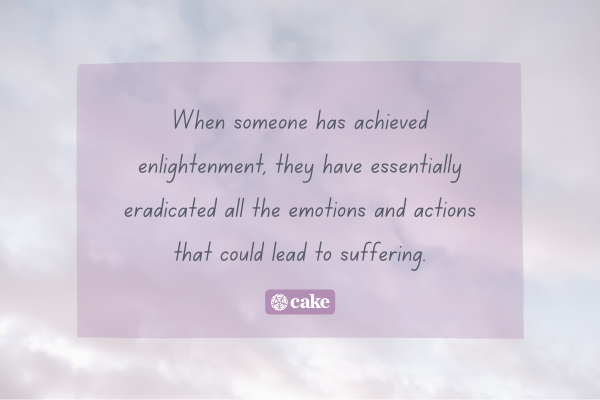 All Buddhists traditionally strive to reach enlightenment or Nirvana. Although Buddhists don’t believe in heaven, in very simple terms, this is the Buddhist equivalent of trying to reach a form of paradise in the Buddhist afterlife.

However, the Buddhist afterlife differs in a big way from many traditional Western beliefs about what comes after death.

What is enlightenment in Buddhism?

When someone reaches enlightenment—Nirvana—they escape the cycle of rebirth and suffering—samsara.

Describing Nirvana or enlightenment is difficult. Not all scholars agree on what Nirvana “feels” like to those who achieve it. In general, the Buddha stated that suffering in life is the result of wrong actions and negative emotions. When someone has achieved enlightenment, they have essentially eradicated all the emotions and actions that could lead to suffering.

This also means that they’ve extinguished their conscious mind. Unlike Western depictions of heaven, in which people spend the afterlife consciously enjoying pleasant experiences, according to Buddhism, enlightenment is the end of a person’s existence (at least in terms of how Westerners think of existence). This reflects the fact that Buddhists do not believe in a permanent soul.

The Buddha knew that a person can’t achieve enlightenment by spending their life giving in to sensual pleasures. However, through his own experiences, he also found that completely abstaining from life experiences also wouldn’t allow a person to reach Nirvana.

The Noble Eightfold Path consists of the following elements: 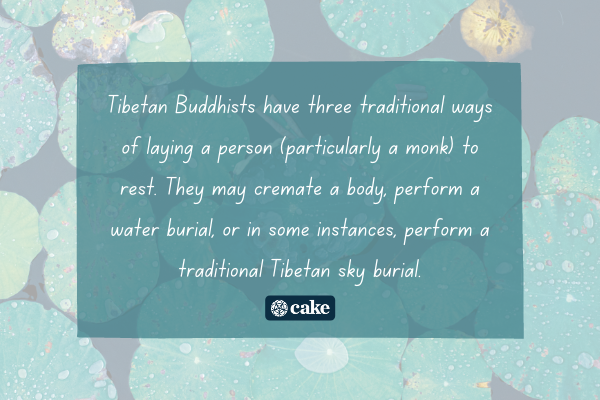 That the Buddhist view of the afterlife differs from many other cultures doesn’t mean that Buddhists don’t have traditions for honoring the dead. Buddhist funeral rites can vary. There isn’t a single tradition that represents how Buddhists mark someone’s death.

For example, Tibetan Buddhists have three traditional ways of laying a person (particularly a monk) to rest. They may cremate a body, perform a water burial, or in some instances, perform a traditional Tibetan sky burial.

Some refer to this custom as jhator. It involves inviting the deceased’s relatives to view the site where the ceremony will take place. However, those performing it typically keep them at a distance. They then ritually cut up and destroy the body until it is no more than a pulp mixed with milk, butter flour, and tea. The monks leave the mixture out for vultures to consume.

Some Buddhists also practice extended rituals for honoring the dead each year. Consider the example of Pchum Ben. During this 15-day annual celebration, Cambodian Buddhists visit pagodas where they make offerings to the dead. They also participate in ceremonies that are meant to convene the dead together. Although Pchum Ben is unique to Buddhist culture in many ways, this somewhat mirrors the way many Mexicans honor the dead during Day of the Dead celebrations.

Buddhist Afterlife: Not an End, But a New Beginning

Every culture has its traditions surrounding death because death is a universal and unavoidable experience. Religious and spiritual beliefs help cultures come to terms with this reality.

However, as Buddhist afterlife beliefs prove, they can also give meaning to life itself. If death is a rebirth directly tied to our actions in this life, what we do while we’re alive matters.