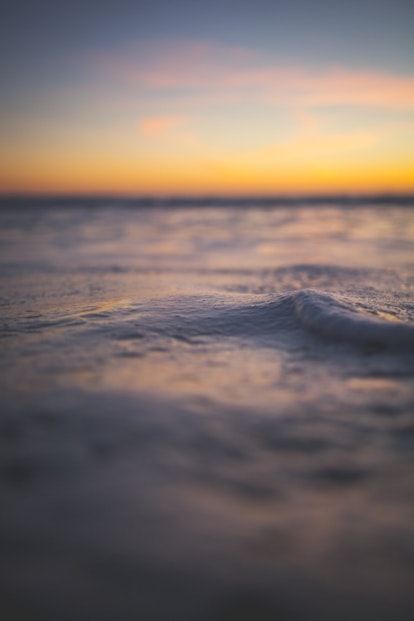 Green burial options may seem like a new trend. But some greener burial alternatives have been around since ancient history.

Tibetan sky burials, which may have been in practice for as many as 11,000 years, involve the practice of leaving a dead body in the open air and allowing creatures to be nourished by it.

Embalming didn’t become a common practice until men’s bodies had to be returned home from the battlegrounds for burial during the Civil War. Before that, bodies were buried without toxic chemicals. And burials at sea date back as far as some ancient civilizations.

What’s a Burial at Sea?

A burial at sea is the disposal of human remains at sea. These may be cremated remains, or they may be a whole body in a casket or sailcloth. The history of water burials is a long and complex one. Historically, some burials at sea have been done out of necessity, and some have been done because of deeply-held beliefs.

Burials at sea are a time-honored practice. Historians think that water burials took place in Ancient Egypt, Greece, and Rome in addition to their more well-known burial customs. At one time, people in the Solomon Islands would place their dead onto reefs so that sharks would consume the bodies. In the South Pacific, bodies were shrouded in a red cloth and sent to sea in a canoe.

Vikings, in particular, were noted for their water burial practices. Not every Viking received a water funeral. Only individuals of high status received a ship burial. Viking funeral practices included placing the deceased in a pleasure ship.

The ships were filled with extravagantly ornamental grave goods. Grave goods are an anthropological term for personal possessions that were placed with the dead.

These grave goods were often meant to be offerings to gods or to help the deceased transition into the afterlife. There are also tales that these Norse ships were set alight in a funeral pyre as they were sent out to sea. However, there is very little historical evidence to support that.

Colonialism and war are two major reasons for water burials. In the 19th century, the British Navy often performed burials at sea. Bodies of sailors were sewn into a shroud made by a ship’s sailmaker or weighted down with the hammocks they slept in and pieces of lead shot. The weighting was necessary to ensure the body would sink and not wash up on shore.

The captain of the ship would perform a religious ceremony, and then the body would be dropped into the water, feet-first. As recently as 1982, during the Falklands War between the United Kingdom and Argentina, wartime burials at sea took place out of necessity.

Burials at sea still take place today, and probably more frequently than you might think. The majority of them are (at least in the United States) are for military personnel.

However, civilians are also able to receive burials at sea provided that their next of kin correctly follows the rules and regulations.

Rules and Regulations for Burials at Sea

The Environmental Protection Agency (EPA) has very strict rules about the disposal of human remains at sea. Human remains must be taken three nautical miles from shore.

At this point, ashes may be scattered or set adrift in specially-made biodegradable urns for a water burial. There is no minimum depth required for the disposal of ashes.

For full-body disposal, the EPA recommends placing the body in a casket or wrapping it in a burial shroud. If you opt for a casket, you must make sure there are no plastic components as those don’t degrade and will pollute the ocean. The best practice is to use a metal casket, although a wooden one is acceptable.

To ensure rapid sinking, the casket should have twenty holes at least two inches in diameter drilled into it. The holes should be evenly spaced in these locations: eight on the top, eight on the bottom, two in the head end, and two in the foot end.

These holes may be covered with a porous material like paper or cloth so that the remains inside aren’t visible. However, plastic-based adhesives like tape should not be used.

Additional weight should be added to the casket to reduce buoyancy. This weight should come from a natural material like sand or concrete. Altogether, the body, casket, and additional filler should weigh three hundred pounds.

Put more of the additional weight toward the foot of the casket. That will make it easier to tip the casket into the ocean feet first, which is the standard practice.

Finally, the casket should be held shut with six natural fiber ropes, chains, or sturdy stainless steel bands to ensure it doesn’t open as it takes on water and begins to sink.

While disposing of ashes doesn’t require a particular depth, full-body burials must happen in at least 600 feet of water.

Process for Burials at Sea

While the United States Navy hasn’t performed wartime burials at sea since World War II, it still performs peacetime burials as a matter of course.

While the Navy handles many of the burials at sea for military members, most civilians will hire a private company that specializes in underwater burial practices.

A civilian burial at sea is usually coordinated through a private company. Civilians have a few choices they can make.

In an unattended scattering, the company will take your loved one’s ashes and scatter them or set biodegradable urns for a water burial adrift without involvement from the deceased’s family. However, they will typically send a video to friends and family members so they can feel more connected to the ceremony.

In an attended scattering or a full-body water burial or funeral, mourners will board a boat and travel into deep waters more than three nautical miles offshore.

Before scattering the ashes or lowering the casket into the ocean friends and family may hold a brief memorial service. Memorial services will vary wildly according to the customs and beliefs of the deceased.

The United States Navy offers a water burial program for the following people:

In a military burial at sea, the remains are brought on board in a casket (for full-body burials) or an urn (for scattering of ashes). Ceremonies of this nature take place when a United States Navy vessel is deployed, so civilians will not be allowed to attend.

However, relatives will be informed of the time and coordinates of the burial and may be given photographs or videos of the service after the fact.

When it’s time for the service, the officer of the deck (a representative of the ship’s commanding officer ) calls “All hands bury the dead.” If possible, the ship is stopped.

The flags are then lowered to half-mast, and the ship’s crew are assembled on the deck. If the deceased is in a casket, it’s covered in a flag and carried feet-first onto the deck by pallbearers. If the remains have been cremated, the urn is brought onto the deck and placed onto a stand.

The first part of the ceremony is religious, following the decedent’s personal beliefs. A Navy chaplain may perform this part of the service, or the commanding officer can step in as a substitute representative for other belief systems.

Once the religious part of the ceremony has concluded, the rest of the ceremony takes place. In the case of a full-body burial, the flag on top of the casket is folded up and retained to present to the family of the deceased.

The casket bearers will tilt the casket into the ocean and slide it in, feet first. In the case of cremated remains, the urn can be opened and the ashes can be scattered.

The ship’s crew will have considered wind direction before selecting a place to stop the ship. Biodegradable urns for a water burial may be dropped into the ocean, instead of scattering the ashes to the wind.

Cost of a Burial at Sea

An at-sea burial performed by the United States Navy is done free of charge.

For civilians who hire private companies, costs vary some from state to state. Generally speaking though, you can expect to pay the following:

For private companies, you can make sure you’re getting the best value for the price by comparison shopping between companies in your state.

What to Expect from a Burial at Sea

At face value, a burial at sea may seem like an unconventional burial method. But it's a longstanding practice that is still used by the United States military to this day.

Civilians and military personnel alike can avail themselves of services that will enable them to be buried in this environmentally-friendly and time-honored tradition.