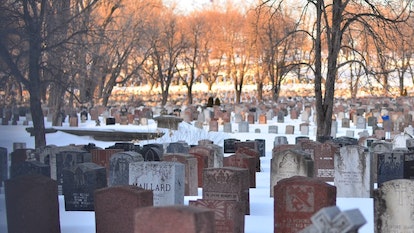 When it comes to burials, most people know what to expect. The body is laid down and entombed in a casket, buried the standard six feet under the earth. This has been done for hundreds of years (and beyond), but why is this the norm?

With a sudden shortage of space when it comes to burying the dead, should we be looking for environmentally friendly, space-saving solutions? The short answer is yes. Many forward-thinking cemeteries and funeral homes are already looking for alternatives. One up-and-coming choice is “stand up” burials. This means the body is positioned standing up rather than laying down, effectively saving space.

As this trend gains popularity, it’s important to learn about different types of entombment to determine what’s right for you and your loved ones. Everyone has their own unique funeral wishes, and new space-saving concerns have a great effect on these. In this guide, we’ll answer the question of whether people are ever buried or entombed standing up?

How Are People “Traditionally” Buried?

Why are people buried lying down?

First and foremost, it’s much easier to bury people lying down. The grave doesn’t need to be as deep, saving time and effort. In years past, people didn’t have the same tools as today. Burying someone deep within the ground in a standing up position wasn’t practical.

In addition, it’s typical to bury people six feet deep. This dates back to the Black Death plague sweeping across Europe in the 1600s. People buried their dead 6 feet under to avoid spreading the virus further. This was believed to be the safest, and this tradition has stuck around for the most part. Burying someone standing up at this six feet rule would be a big chore and isn’t practical in many parts of the world.

How are people buried in other cultures?

There is a lot of variation in how people are buried in different cultures. Some cultures burn their dead, some lay bodies in the fetal positions, and some even are buried without shoes. For example, according to Islamic tradition, bodies must face Mecca when they’re laid to rest. In Judaism, there is no embalming which is said to harm the body which belongs to God.

Ultimately, each culture has its own way of burying the dead. While it’s true most people in North America are familiar with “laying” loved ones to rest in a horizontal position, this is not necessarily true of the rest of the world. For many parts of the world, the way in which they bury their dead depends on the climate, culture, and religious beliefs.

» MORE: The practical steps after a loss can be the hardest. This checklist explains everything you need to do.

Why Do People Get Buried Standing Up?

In the past, there was not much of a practical reason to bury loved ones standing up. Having the body horizontal was much easier for the gravedigger, and made it possible for the family to have space to mourn around the grave. As time progressed, space became more of a concern.

Today, there simply isn’t enough space in current graveyards. This has led some cities to “recycle” graves or even convert cemeteries into parks and playgrounds. People have begun to consider burial alternatives as a way to conserve the space we do have. One of these alternatives is standing up burials.

In a “stand up” burial, the body is buried vertically instead of horizontally. While a deeper hole is needed, this cuts down on the overall space used, making room for more burials nearby. Some funeral homes are already specializing in this unique type of burial. One example is Upright Burials in Australia. Since 1984, Upright Burials has helped Australians achieve an innovative, sustainable, and less expensive way to get buried.

While this is far from the norm, it is gaining in popularity along with other new burial alternatives. It’s still not common in the United States, but that’s likely to change in a few years as more people look for ways to make the burial industry more environmentally friendly.

Examples of People Getting Buried Standing Up

Believe it or not, standing up burials aren’t a completely new phenomenon. There are numerous examples throughout history of figures being buried in this unique way. In most cases, this was a personal choice on behalf of the deceased. It might have been groundbreaking at the time, but now these names below earned a unique place in funeral history!

One of the most well-known people buried standing up is buried in the famous Westminster Abbey in London, England. This famous Poet Laureate’s work was celebrated in his lifetime, but he always seemed to be poor. In 1637 when he died, he had fallen back into poverty.

Because he struggled financially all of his life, he joked to the Dean of Westminster about his inability to afford the infamous Poets’ Corner in Westminster Abbey. He joked, “I am too poor for that...No, sir, six feet long and two feet wide is too much for me: two feet by two feet is all I want.” Because of this, Jonson was buried standing on his feet in the Nave rather than the Poets’ Corner.

Those who have come to be buried standing up seem to have done so through a bit of wit and humor. In Texas, Britt Bailey insisted that he never wanted anyone to be able to say “there lies Britt Bailey.” Today, locals in his small Texas town say his ghost haunts the area.

Buried on his family’s prairie, he wished to be buried standing up and facing the west. He also wanted his rifle at his side and a jug of whiskey at his feet. Even in death, nobody looks “down” on this upright man.

Finally, cowboy Jimmy Dale Struble was buried standing up in 1992. For the end of his life, Struble was confined to a wheelchair after a fight. This struggle with being unable to stand on his own led to his unusual burial request.

After living so many years lying down, he wanted to make sure he was buried standing up. He also requested that his boots were left on. Though there are no reports of him haunting his local Colorado town, it’s an important reminder of the legacy our burials leave behind.

While being buried standing up is not the norm as of now, times are changing. As more cemeteries face limited real estate, people are finding unique alternatives to address these new challenges. With so many different burial practices around the world, it comes as no surprise that standing burials aren’t completely unheard of. From famous cowboys to British poets, people have made a mark with their unique burial choices.