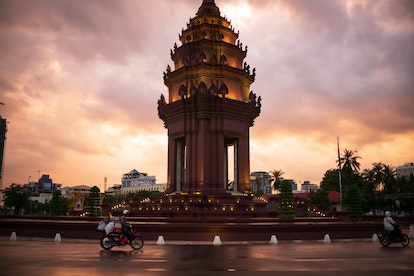 Different cultures around the world have their own unique New Year traditions, and these don’t always fall on January 1st. The Cambodian (Khmer) New Year in Cambodia is one of these holidays. During this celebration, Cambodians stop work and celebrate with friends and family.

Unlike other Asian holidays, the Khmer New Year doesn’t follow the Lunar Calendar. It follows the Gregorian calendar, making it a unique celebration. This New Year marks the end of the harvest season, meaning it’s a rare chance to kick back after hard work.

The Khmer New Year is also a chance to reflect on deceased loved ones. Looking at the way people honor death in different cultures is a window into distant corners of the globe. In this guide, we’ll dive deep into the Cambodian New Year to explore its dates and traditions.

The Cambodian New Year is always celebrated in April. This is because a large percentage of the Khmer population is farmers, and April is one of the hottest months of the year. November through March is the time for harvesting crops. By April, there is no rain, and the weather is so warm that it’s time to take a break.

Khmer New Year is celebrated for three days, and each day represents something different. The days start on either the 13th or 14th of April and continue from there.

Prior to the 13th century, Khmer New Year was in late November or even December. It was moved to coincide with the harvest season, mirroring many of the other harvest festivals seen throughout the world.

» MORE: Have you lost someone? Here is your full checklist of next steps.

The Role of the Khmer in Cambodia

Today, the Khmer people make up a large population of Cambodia. However, in the past, the Khmer empire was a powerful state that covered Cambodia, Thailand, Laos, and parts of Vietnam. Both Hinduism and Buddhism were important religions for the Khmer people, and they continue to have importance today.

One of the world’s most impressive temples, Angkor Wat, was built by the Khmer. These were historically skilled builders, farmers, and leaders. The Khmer empire ended in 1431, but these people are still a thriving ethnic group in Cambodia and Thailand in modern times.

Today, the Khmer are an agricultural people. They live in smaller villages and pursue things like pottery, weaving, and metalworking in addition to farming. Buddhism is the leading religion, and this influence is seen in their New Year celebration. The Cambodian New Year is an ancient practice dating back to the days of the Khmer empire.

What traditions are specific to the Cambodian New Year? As mentioned above, this New Year has a long history dating back to a powerful empire and Buddhist beliefs, leading to a one-of-a-kind celebration.

Days of the celebration

The New Year event lasts three days. Each day has its own ritual significance and things to expect. Cambodians follow these daily practices to ensure they bring good luck to their families in the new year. Here’s what each day represents:

Each day has its own practices that make it special. Cambodians travel from all over the world to be with their loved ones on this holiday. It’s all about coming together in honor of ancestors and welcoming the new year.

The beginning of April is a time for preparing decorations for the Cambodian New Year celebration. Since the first day is a welcome to the New Angels, Cambodians clean their homes and decorate in honor of this welcoming. The New Angels take care of the world for a period of one year, so families leave offerings in their honor.

People believe these Angels visit their homes and stay with them for the entire year. This means they want to make a good impression, so families are known to go all out to decorate their space for the occasion.

Like most New Year festivals, food plays a large role in the Cambodian New Year. Food is used to welcome in the new year, and it’s common for families to place fruit and drinks outside their home as an offering to the Angels.

Food is also given to monks at local temples as an offering. This is a way to repent for one’s mistakes over the past year, and it’s also a sign of respect to these religious leaders. On the final day of the New Year, families might enjoy a feast or take part in community meals. Food is typically Cambodian favorites like curry, nom banh chok, and fish amok.

Songs are a common part of the Cambodian New Year. Not only are songs a part of many of the popular games, but there are also special songs in honor of the New Year. Cambodian music is traditionally played on wind instruments, fiddles, and gongs.

There is a lot of improvisation in this type of music, and it’s not always possible to locate specific songs for the holiday. Local musicians perform in homes, at temples, and in the streets. Music keeps the excitement high, and it’s not uncommon to see many people join the fun.

Games are one of the most anticipated parts of the New Year celebration. Crowds of friends and families are ready to take a break from their hard work, so they’re quick to fill their time with popular games.

These aren’t your typical games, like board games or dancing games. Instead, they’re all about mental and physical dexterity.

Since this is one of the only times that boys and girls can play together, younger kids and teens get together socially to play these fun games. Some games are for adults, and others are for children, but all are a great way to enjoy the New Year.

One of the most unique traditions in the Cambodian New Year is the ceremonial wash. This is known as “Pithi Srang Preah.” It’s a ceremonial washing of elders, monks, Buddha statues, and other symbols of ancestry.

They wash these individuals with water as a way to ask for forgiveness for any mistakes from the past year. This becomes a fun occasion for sharing water, talking about the future, and welcoming the new. The practice of traditional washing is a symbol of washing away one’s bad deeds to bring prosperity.

Where Can You Celebrate Cambodian New Year?

You might be surprised by just how many places you can celebrate the Cambodian New Year. First and foremost, it’s a common holiday throughout Cambodia and Southeast Asia. You’ll find pockets of these New Year festivals in big cities throughout Asia because of the large population of Cambodians around the world.

This New Year tradition isn’t just limited to Asia. It’s also common in North America. Cambodians are a strong minority in the United States, and local communities celebrate the New Year every April with festivals and family events.

If you choose to travel to Cambodia for the New Year, be mindful that cities tend to empty. This is a time for traveling home, and people choose to celebrate with loved ones or in smaller villages. As such, there are fewer services than usual throughout the country.

While visitors are welcome to join the traditions across the world, the best places to be are the ancient Khmer cities of Phnom Penh or Siem Reap.

Welcome the New with This Cambodian Festival

Like other New Year celebrations, the Cambodian New Year is a time for families to remember a family member who passed, join together, and participate in ancient traditions. The Cambodian people welcome change and newness with open arms. They work tirelessly all year long to relax and celebrate over these three days of fun.

The Cambodian New Year just goes to show how important it is to hold onto the traditions of the past while also embracing the future. In this rapidly modernizing country, the Khmer new year is a chance to reflect on how far everyone has come and also how much farther they have to go.

If you're looking for more on New Year traditions, read our guide on the Chinese New Year.