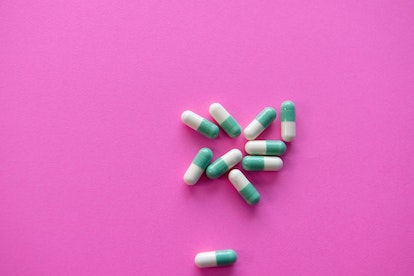 Carrie Fisher’s passing marked the end of one of Hollywood’s most celebrated lives. Many found her death to be particularly sad, given that Fisher’s mother, Debbie Reynolds, died only one day later.

Most people may know Fisher as Princess Leia from the Star Wars movies. However, that was only part of her career. Along with starring in many other films and TV shows and writing several screenplays and books, Fisher also spoke out for a specific group of people in need of support.

This advocacy inspired her family to select a unique design when choosing Carrie Fisher’s urn. We will describe why this particular urn for ashes is so significant.

The design of Carrie Fisher’s urn is very distinct when compared to many others. Its pill shape and color scheme, with one white half and one green half, immediately reminds most people of a medicine capsule.

It’s no accident. The urn is actually in the shape of a giant Prozac pill, complete with text specifying its dosage.

Why Did She Choose a Prozac Pill Urn?

Carrie Fisher herself didn’t choose this particular urn. It also wasn’t the only container for her ashes. Her family opted to place some of her ashes in her mother’s coffin. Carrie Fisher’s burial and funeral also served as her mother’s funeral. During the service, Carrie’s brother, Todd Fisher, held the unique Prozac pill urn containing the remainder of his sister’s ashes.

Origins of the urn

Many suppliers and artists offer creative urns that may correspond with a deceased person’s interests, passions, profession, or other relevant subjects. One of the leading companies creating one-of-a-kind urns af all shapes and sizes is Foreverence.

However, Fisher’s loved ones didn’t order this urn from an artist or supplier. In fact, Carrie Fisher’s urn isn’t an urn at all.

The Prozac pill urn is an antique novelty item Fisher kept on display in her home for years. According to her brother, it was one of her most “prized possessions.” He stated that he and Carrie’s daughter, Billie Lourd, thought it was a good idea to use it as an urn after they struggled to find anything else they considered suitable.

This is a creative idea if you’re worried about how much an urn costs. Although you want to choose a container for a loved one’s ashes that will keep them safe and honor the deceased’s memory, if you’re on a tight budget, you might already own a container that can serve the same purpose as an urn.

The significance of Carrie Fisher’s urn

Carrie Fisher didn’t merely keep a giant Prozac pill on display in her home because she thought it would make for a fun conversation piece. Given Fisher’s life experiences, it’s highly likely she assigned special significance to what would eventually become her urn.

During her early years as a rising Hollywood star, Fisher struggled with manic episodes, drug abuse, and a range of other difficulties. Eventually, she learned she had bipolar disorder.

Fisher didn’t immediately accept her diagnosis. However, when she did, acknowledging that she had bipolar disorder inspired her to help others in a similar position.

Fisher spent the remaining years of her life as a fierce advocate for those struggling with mental health issues. The following are just a few examples of how she promoted the importance of mental health awareness and treatment.

Carrie Fisher wrote several books about her mental health issues and struggles with drug abuse. Instead of glossing over the “ugly truth” the way some stars might, she was instead brutally honest in her books.

This ensured that many readers facing similar struggles realized they weren’t alone. Knowing a major success like Fisher had the same problems they did and overcame them to thrive in her career, inspired readers.

Fisher was not reluctant to grant interviews on the topic of mental health when the opportunity to do so arose. In fact, she embraced them.

For example, when Joanne Doan secured funding for her magazine bpHope, which would offer support, advice, and resources to Americans with bipolar disorder, she spontaneously called Carrie Fisher. She asked if Fisher would give an interview and pose for the cover of the first issue.

Fisher enthusiastically agreed. Doan found this fairly stunning, given that Fisher was a major star, the magazine was for a very niche audience, and it didn’t even exist yet.

Doan also credits Fisher’s generosity with helping bpHope succeed in its early years. By landing a significant interview with Fisher and getting her to pose for the cover, Doan attracted advertisers who ensured the magazine could grow.

Fisher also didn’t shy away from the subject of her mental health struggles when giving interviews on TV talk shows. She often used these shows as a platform to share her message with an audience that might not otherwise hear it.

All this helps to explain why Fisher may have kept a giant Prozac pill in her home. It was a symbol of a vital aspect of her overall life.

A unique sense of humor

Carrie Fisher’s urn symbolizes the critical role mental health advocacy played in her overall values. That said, some have pointed out that her urn also serves as a reminder of a key aspect of her personality.

Although her most famous role didn’t give her many opportunities to flex her comedic muscles, Carrie Fisher’s fans know she was a very funny humorist and comedic performer. Her sense of humor didn’t leave when she was off-stage either. Fisher had a unique sense of humor: equal parts playful, wry, zany, biting, and much more.

That’s another reason a large Prozac pill was the right choice for Carrie Fisher’s urn. While some might consider storing ashes in a giant antidepressant to be in poor taste, those who knew Fisher best believe she’d find the idea very amusing.

Where Can You Find Her Urn Today?

Todd Fisher held on to the famous Prozac pill urn containing most of Carrie Fisher’s ashes. The odds are slim you’ll ever get a chance to see it in real life, unless the Fishers decide to put it on display in a public space someday.

However, they did bury some of her ashes with her mother. This was partially a means of striking a balance among everyone’s wishes. The family wanted to bury both Carrie Fisher and Debbie Reynolds together.

This wasn’t an option because, while Debbie Reynolds specified wanting her loved ones to bury her after her death, Fisher had made it clear that she preferred cremation. Burying some of Fisher’s ashes in her mother’s coffin allowed her loved ones to satisfy their wishes while respecting hers.

If you’d like to see the grave Fisher’s ashes share with her mother’s body, head to Forest Lawn Memorial Park at 6300 Forest Lawn Drive in Los Angeles.

Tracking down Fisher’s grave shouldn’t be too difficult. Atop a headstone bearing inscriptions of Fisher and Reynold’s names, dates of birth, and dates of death, you’ll see a gorgeous statue of a mother and daughter holding hands. It’s a monument to both women as individuals, as well as an artistic depiction of the close bond they shared.

That said, because the cemetery is home to many graves, you can also look up the location of Fisher’s via the official Forest Lawn Memorial Park (Hollywood Hills location). Its search tool allows you to see the mapped location of any grave in the cemetery. However, there are a few Carrie Fisher graves there, so make sure you head for the grave of Carrie Frances Fisher!

You may also want to visit a few other spots while at the cemetery. It’s home to the graves of such noteworthy figures as Bette Davis, Stan Laurel, John Ritter, and numerous others. Additionally, the grounds include George Washington and Thomas Jefferson’s statues, a replica of Boston’s historic Old North Church, an American history museum, and various other interesting spots.

Carrie Fisher’s urn wasn’t just unique because of its design. It was unique because it gave Fisher an opportunity many don’t have: the chance to remind people about an important issue close to her heart, even after her death.