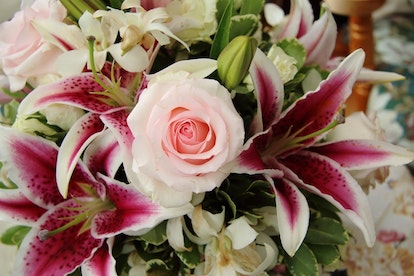 Flowers are an important part of many funeral services. Mourners often send flowers to a funeral as a sign of respect to the deceased and the deceased’s family. Funeral planners often order flower arrangements for decor. One example is a casket spray. A casket spray is an arrangement that typically goes on top of a casket to provide ornamentation.

A casket spray from a florist can cost between $150 and $250 if you opt for less expensive flowers. The cost can climb up to the $300 to $450 range or even higher if your casket spray features more premium blooms like lilies, orchids, or roses. You can save some money and arrange your own if you’re crafty. Here are some casket spray ideas to inspire a do-it-yourself casket spray.

Funeral flower keepsakes are a popular memento after a funeral. Friends and family members might keep some of the flowers from a funeral wreath or casket spray and preserve them between the pages of a book. They might then use these dried flowers to create artwork or display them in a shadow box. But dried flowers are very fragile and even carefully preserved ones can crumble.

One solution to this is to make a casket spray out of faux flowers. You can source nice silk flowers relatively inexpensively. It’s an especially cost-effective alternative if you want to use high-end flowers like stargazer lilies.

Once the funeral has ended, you can give these non-wilting flowers to family members and close friends as keepsakes.

Did you know flowers have their own language? Floriography is a form of cryptographic communication. Certain meanings are attached to flowers, enabling them to be used to communicate secret messages.

Floriography likely originated in Turkey in the 16th century or earlier. But it really blossomed (pun intended) in Britain during the Victorian era. During that time frame, people weren’t able to express their emotions, particularly when it came to romantic attachments. Floral arrangements allowed people to send coded messages expressing their affection.

You can use floriography to subtly communicate a specific message with a casket spray. For instance, if the deceased was known for being a good friend, you could select flowers that represent friendship — freesia, iris, and yellow roses.

When you’re putting together a funeral flower arrangement, it’s nice to have a theme. One easy theme to follow is selecting flowers that are seasonally appropriate. Flowers that are in season are more inexpensive due to their ready availability. You can also use a color story to tie into the season.

If the funeral is in the spring, a casket spray in pale pastel shades is lovely. In the fall, you might want to gravitate toward brighter, bolder colors that evoke the falling of the leaves.

Chrysanthemums and marigolds are great for a fall-themed casket spray. Not only do they come in rich hues like oranges and golds, but they both also symbolize death in various cultures. This works in a subtle variation of floriography, too.

More people are opting for green funerals. In response, the funeral industry is looking at ways to make traditional funerals more eco-friendly. Casket sprays may seem like they’d be naturally eco-friendly. How could flowers not be? But a lot of flowers are grown using pesticides and other chemicals.

Look for natural, organic, and fair-trade flowers when sourcing blooms for a casket spray. Casket sprays also get a lot of their shape from crafting foam, which isn’t tremendously sustainable.

However, you can get biodegradable craft foam made from natural ingredients. It allows you to create a casket spray that still has plenty of shape but that won’t be terrible for the planet.

One kind of funeral flower is called a headstone saddle. It’s an arrangement designed to perch atop a headstone without obscuring the inscription. The base is usually foam that flowers can be stuck into and a metal form that clamps onto the headstone.

Inspired by that, you could create a casket spray that incorporates an actual saddle. You can arrange wildflowers and greenery atop the saddle as well as spilling out of the saddle pockets. Then the saddle can be laid atop the casket. This is a sweet, rustic take on a casket spray for a horse enthusiast.

Casket sprays are often expensive and time-consuming to put together. People want arrangements that are diverse but also complimentary, which can end up being costly. But a simple, monochromatic casket spray can be really elegant. Just pick three types of flowers in shades of the same color.

For a white monochromatic casket spray, you can use lots of baby’s breath, which is an inexpensive filler. It’s voluminous, so it adds a lot of shape to an arrangement. Then use some larger white flowers like roses and lilies to round out the casket spray. Since you won’t have to use as many it will still be budget-friendly, but will still have a stunning visual impact.

Many casket sprays look like an explosion of flowers. They look like you would expect a visual representation of the word “spray” to look.

But you can also have a shaped casket spray. If the deceased was devoutly religious, you could make the spray in the shape of a cross or some other meaningful religious iconography.

There are also other shapes you can incorporate into a casket spray. Heart shapes are a popular option.

You can do it as more of a wreath-type arrangement with a hollow center, or as a solid heart. One popular variation is a bleeding heart casket spray. The heart base is done in a color like white, but a vein of red flowers runs through it. It’s a striking arrangement.

Paper flowers are another fun alternative. One fun variation on this is paper flowers made from comic-book pages.

Each multidimensional individual bloom contains several colors. This is a great casket spray idea for a comic book lover. Just don’t use any of the deceased’s treasured or valuable comics to make it!

Some sports fans are really devoted to their teams. It’s nice to incorporate their love for a particular sports team into their funeral in some way.

One way to do this is by using their team’s colors in a casket spray. For example, a Florida State fan’s casket spray could be made up of garnet and gold flowers.

If you don't find exactly what you're looking for in the form of a floral casket spray, here are some alternatives:

Casket sprays are usually ordered from a florist by the immediate family members or partners of the deceased. But they can also be made by people with the skills to do so.

If you aren’t an immediate family member but you’re skilled at flower arrangements, consider offering to create one of these masterpieces. You can do this in lieu of sending flowers. It can relieve both some of the financial burden and the responsibilities that families face while planning a funeral.