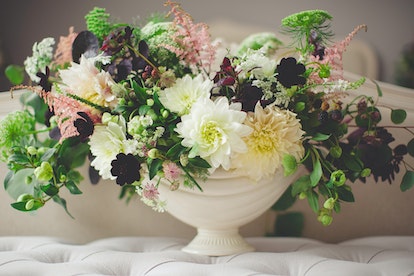 When you begin your end-of-life planning, there are quite a few details to consider. You might start researching burial plot costs at your local cemeteries or dive into learning about columbarium niches and eco-friendly burial options. There are a lot of new funeral trends to learn about, and more seem to appear each day.

There's a lot of vocabulary specific to the funeral industry, so it can be hard to know if you’re using the right words. Before you meet with your local funeral director, you may want to familiarize yourself with some of the vocabulary related to funerals.

Two of the most commonly confused words are “casket” and “coffin.” Often used interchangeably, these words have different meanings. But what makes them different, and how do you know if you’re using the right word? Keep reading to find out the answers.

Webster’s Dictionary defines the word “coffin” as “a box or chest for burying a corpse.”

It came from the Latin word “cophinus,” meaning “basket or hamper.” It may have also derived from the Greek word “kophinos,” meaning “a basket.” The word "coffin" has been used to describe a box for a corpse since 1525.

» MORE: What do you need to do in the days and weeks following a death? Get the full checklist.

According to Webster’s Dictionary, the word "casket" is defined as “a small chest or box (as for jewels)” and “a usually fancy coffin.” It is from the Middle English and may have been a modification of the Middle French word “cassette” meaning "box."

The word "casket" began being used to describe a burial container in the 1800s. The uptick in this word usage coincided with the recognition of undertaking as an official profession. In today’s world, it's often considered an American version of the word “coffin.”

11 Differences Between Coffins and Caskets

Nothing in the etymology of the word would imply that a coffin is a six-sided box. But according to Merriam Webster’s report titled “Words at Play,” a coffin describes a box that's tapered to mimic the form of a human body. It's wider at the shoulders and narrower at the head and foot.

Imagine a coffin that you might see in a movie. Dracula or anything from the old-west genre would feature a coffin. Coffins are more austere, design-wise. Historically, they were made without any padding inside. But even that is not always the case. Many people are buried in coffins with padding.

"Casket" usually describes a rectangular box for burying the dead. As previously mentioned, the word is derived from the term describing a box that holds something precious or valuable, such as jewelry.

Caskets can be thought of as a plush version of a coffin. They're more typically used for modern funeral services, like these stainless steel caskets and this mahogany casket.

3. The word “coffin” is older than the word “casket”

We learned earlier that the word coffin was used as early as 1525. In England, only the wealthiest members of society were buried in coffins. If you weren’t wealthy, you were simply wrapped in cloth and placed directly in the ground.

This changed in the 1700s when new laws were passed in England. These laws allowed people of all classes to be buried in a coffin. New settlers in America were happy to follow the rules of their motherland. Six-sided coffins started being used to bury the dead in the U.S. as well.

4. The traditional shape of the American “coffin” changed during the Civil War

In the U.S., the popularity of these two burial options changed from the coffin to the casket during the middle of the 1800s.

Although there are many theories about why the shape changed during the 1860s, many say that change occurred because of the Civil War. There was so much death during this time caused by the war and disease that attempts were made to “soften” or “beautify” death.

Larger coffins were created with softer interiors. The word changed to describe the receptacle as well. Since “caskets” were terms traditionally used to hold items of great value, Americans began to use the word as a euphemism for “coffin.” Subsequently, these words began to be used interchangeably.

5. For 19th Century Americans, the word “coffin” was seen as old fashioned

As the U.S. became more established, citizens became less likely to follow old-world ways. This was true for all aspects of life, but it was especially true in the funeral industry.

Even though other countries continued to use hexagonal-shaped coffins, more Americans began using rectangular-shaped caskets. They were considered the more modern choice for burial.

This well-known American writer did not agree with the use of the word “casket.” A year before he died, he said that the term was a “vile, modern phrase.” He felt that it removed the idea of death from people’s lives.

There are no sources that can tell us if Hawthorne was buried in a coffin or a casket, but we can guess which he would have preferred if given a choice.

7. The words “coffin” and “casket” are synonyms

According to Webster’s, today the words “coffin” and “casket” are synonyms for each other. Most Americans use these words interchangeably, without directly referring to different shaped boxes.

8. The Federal Trade Commission only uses the word “casket”

In the report titled “Funeral Costs and Pricing Checklist,” which was created by the Federal Trade Commission, there is no discussion of “coffins.” The report states that caskets vary in style and price and that they are typically made of metal, wood, fiberboard, fiberglass, or plastic.

The use of the word “casket” in the report from this government agency implies that it is the preferred word to use for Americans.

9. Searching online for either a “coffin” or a “casket” results in the same products

The words “coffin” and “casket” are so often used interchangeably that a Google search produces results the same products. Searching for a coffin to purchase results in a rectangular-shaped box. And vice-versa if you search for a casket.

10. Six-sided coffins are challenging to find in the United States

Even if you prefer a coffin to a casket, you might have a difficult time finding one at any of the leading retailers in the United States. A quick search of America’s largest funeral retailers shows pages and pages of four-sided caskets made from every material imaginable. Very few are shaped like a traditional hexagonal coffin.

11. You can build your coffin or casket

If you don’t like the idea of spending a lot of money on a plush casket, and you don’t want to be cremated, you could build a coffin or casket. There are plenty of plans available for free online that will walk you through the process.

You could also request that your survivors build a coffin for you. This is a common practice in some communities. It is one last way the family and friends of the deceased can honor them.

Alternatives to Caskets and Coffins

Today, you have more options for your final disposition than ever before. You can choose to be buried in a casket or a coffin, or you can pick something even more unique, like one of these alternatives:

If you choose to build your coffin or casket, make sure you tell your family members where you are storing it. Or if you have strong opinions on the color of the casket (or its interior), make sure you let your loved ones know.

In fact, why not let your family know all of your funeral wishes? You can tell them who you want to serve as a pallbearer. You can share your opinion on whether you prefer an open or closed casket.

Start your end-of-life planning today so you can be sure that all of your wishes will be followed. If you go to the trouble of making your funeral arrangements, share this information with your loved ones. That way they’ll know what you want. Whether you choose a coffin or casket, planning ahead makes the process easier for everyone. And that’s what really matters.