Christian religions, including Catholicism, base their beliefs about the afterlife on the resurrection of Jesus Christ. The Church has many cut-and-dried teachings about dying, death, and what happens after a person passes away. At the same time, the Church has many beliefs that are more nuanced and difficult to comprehend.

You might be intrigued by the ins and outs of the Catholic faith for personal reasons, or you might have an interest in death in different cultures, in general. Maybe you’re supporting a Catholic friend who’s just lost a loved one.

No matter what’s piqued your interest in the Catholic Church and its teachings about the afterlife, you can read up on Catholic beliefs about death, below.

How Do Catholics Treat Death or Dying? 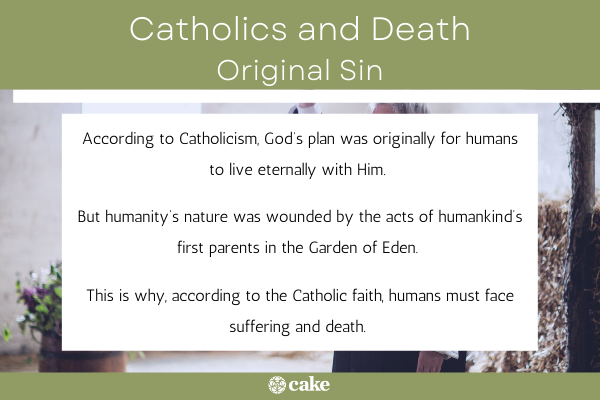 It’s only natural to wonder what happens when we die. We might wonder what it’s like to die, and what the right steps are when someone we love passes away. That’s why every religion has its own teachings about death, dying, and caring for the dead.

Catholicism provides its followers with hope for eternal life after death. But the religion also has underlying concepts about why we die, how death occurs, and what Catholics should do when a family member is dying.

According to Catholicism, God’s plan was originally for humans to live eternally with Him. But humanity’s nature was wounded by the acts of humankind’s first parents in the Garden of Eden. This is why, according to the Catholic faith, humans must face suffering and death.

Because of this “original sin,” humanity will always face the burden of death, even though it was not in God’s original plan. Part of that burden is fearing death and wondering what will happen to us when we die.

Catholics believe that each human being has two components: the body and the soul. The body and soul are the two parts that make a person whole. According to Catholicism, the body can’t live without a soul, as the two parts are profoundly joined together.

The key difference between the body and the soul, in fact, is that the body is mortal, while the soul is immortal. At the moment of death, Catholics believe the body ceases living. But the soul can live on in the afterlife.

As a Catholic approaches death (in old age or illness), they prepare for death through acts of love, confession, and prayer. Their priest typically comes to offer last rites in a day or two before death is expected.

Catholic family members and caregivers often strive to help the dying person cope with suffering at the end of life. Suffering is a consequence of original sin, but the Catholic faith encourages followers to find meaning in it.

Catholics may find meaning in suffering, at the end of life, by connecting spiritually to the crucifixion of Jesus. This meaning stems from the belief that God’s love follows a person through life, suffering, and dying. It also represents the Catholic teaching that life is eternal, and that death doesn’t have the final word.

Another core teaching in Catholicism is that human life is infinitely valuable. That core principle is known as sanctity of life. According to Catholicism, each person possesses inherent dignity because they’re made in the image of God and redeemed by Christ.

The sanctity of life principle dictates that physical life should be nurtured and supported no matter what. When it comes to life-or-death decisions, therefore, life-sustaining measures are always the preferred choice.

Most Catholic funerals feature a wake or rosary service, where family and friends gather to recite the rosary prayers. After this, a traditional Catholic Mass generally takes place at the Church, featuring the blessing of the casket with holy water and the recitation of various blessings.

What is Heaven, Hell and the Purgatory in Catholicism? 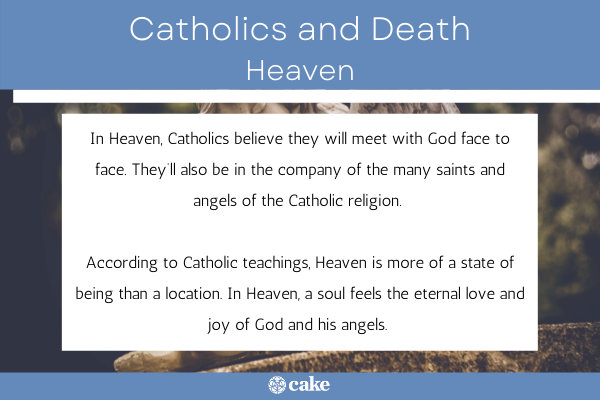 In addition to particular beliefs about life and death, Catholicism has detailed teachings about life after death. Although the body and soul are one in mortal life, the soul has the capacity to continue on after death according to Catholic teachings.

Therefore, Catholic ideologies about the afterlife are relatively fleshed-out and detailed. The ideal afterlife, according to Catholicism, is one where you’re reunited with God and receive His mercy and grace.

In Catholic understanding, each human retains his or her individuality in the afterlife—whether that be in Heaven, Hell, or Purgatory.

In Catholic understanding, all of humanity faces the consequences of death because of its sinfulness. But according to Catholic teachings, God—through Jesus Christ—broke the bondage of death through reincarnation. In doing so, He made it possible for those who believe in Christ to achieve salvation, too.

Much of Catholicism is geared toward the principle of salvation, which is the state of being saved from death. According to Catholic beliefs about death, those who achieve salvation live an eternal life with God in Heaven.

Catholics believe that God grants salvation to all of those who participate in the Church. But they also believe that non-Catholics have the chance of achieving salvation if they seek God and follow his will as they know it.

The ultimate goal, in Catholicism, is to achieve reunion with God in Heaven. In Heaven, Catholics believe they will meet with God face to face. They’ll also be in the company of the many saints and angels of the Catholic religion.

According to Catholic teachings, Heaven is more of a state of being than a location. In Heaven, a soul feels the eternal love and joy of God and his angels. Catholics also believe they’ll be reunited with family, loved ones, and ancestors who have died and gone to Heaven.

It is every Catholic’s hope to live in the perfection of Heaven, knowing God and praising God for all of eternity. However, Catholics generally believe that most souls won’t go to Heaven immediately. Instead, they believe most souls don’t undergo sufficient cleansing during life to enter Heaven, so they must go through an interim location called Purgatory, first.

Like its name suggests, “Purgatory” is a place where souls can “purge” their sins before being allowed entrance into Heaven. Even though Jesus Christ’s death opened the door for all souls to achieve salvation, not everyone atones fully during their mortal life.

Some souls need time in purgatory to reach the necessary state of purity before they can reunite with God, the angels, and their holy loved ones.

In Purgatory, human souls undergo severe punishment as a way to cleanse themselves of sin. All humans who go through Purgatory will eventually achieve entrance to Heaven. However, the length of time each soul spends in Purgatory varies depending on their level of sinfulness.

Souls who are too sinful to enter Heaven, whether immediately or after a time in Purgatory, may be sent to Hell. Traditionally, Hell has been seen as a location: a place of neverending torment and suffering. But modern Catholicism sees Hell as a state of being. In the same way, Heaven is a state of being rather than a physical location.

Instead of peace and love, though, souls in Hell are subject to the total lack of God’s presence. Modern theologians often describe Hell as a state of spending eternity removed from the source of all that is good (God), with no hope for relief. 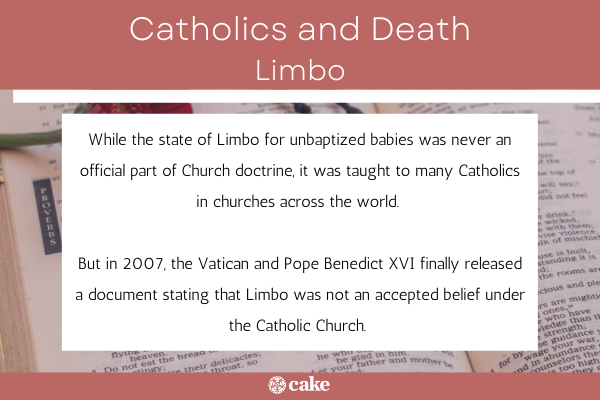 For centuries, many Catholics believed that there was another state of being after death: Limbo. Limbo was originally envisioned as the place where unbaptized babies went after premature death.

While the state of Limbo for unbaptized babies was never an official part of Church doctrine, it was taught to many Catholics in churches across the world.

But in 2007, the Vatican and Pope Benedict XVI finally released a document stating that Limbo was not an accepted belief under the Catholic Church.

Whether you’re just interested in Catholic beliefs about death and the afterlife, or you’re supporting a loved one through their grief, there’s always more to learn about Catholicism.

Catholic beliefs about death and the afterlife are complex and ever-evolving. And Catholics across the globe have varying opinions on subjects like honoring the dead. Catholics in the Philipines, for example, might have slightly different beliefs from Catholics in Mexico, Spain, or Italy.

It’s always important to take an individual’s beliefs into account, even if you know they’re Catholic. Culture, family values, and individual experience also play an important role in how we see death and the afterlife, in addition to our religious orientation.