Like most Catholic ceremonies, Catholic funerals are full of ritual and tradition. Though they are usually a solemn occasion, they can also be an opportunity for the bereaved to find closure and comfort in the support of their close family and friends.

COVID-19 tip: If you're planning a virtual Catholic funeral using a service like GatheringUs, you can still adapt many of these traditions for online guests.  Just talk with your funeral director or event planner to help you figure out the logistics or any limitations.

What Happens During a Catholic Funeral Service 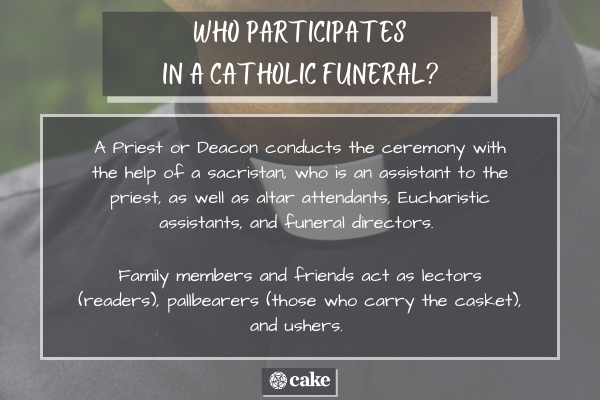 In the Catholic funeral tradition, there are multiple ceremonies in honor of the deceased. First, there is usually a vigil service, which may also be referred to as a wake or a rosary service. Next, there is a funeral Mass, and finally, there is the graveside committal.

Each part has its traditions and customs, and people may attend one or all parts, depending on how close they were with the deceased.

Tip: No matter what a family's religion or traditions are, planning or attending a funeral is hard. So, too, are the many other tasks you might face after the death of a loved one. If you'd like some help and guidance through the process, check out our post-loss checklist.

The role of the vigil service, also known as the wake or rosary service is a time to pay respect to the decedent and the family, as well recite the rosary, which is a collection of prayers. This usually takes place at a funeral home, and it is a time to reconcile with the deceased, as well as their family and loved ones.

The casket will be at the funeral home and may or may not be open. This decision is up to the family of the deceased. A priest or layman will lead the vigil service and offer prayers or readings from scripture. During the wake, one or multiple eulogies may be read.

After the vigil service, sometimes the following day, a funeral Mass will be held and conducted. This will likely take place at the same Church where the decedent had been receiving sacraments (religious rites) during their lifetime. A procession will then bring the closed casket into the church and will be carried by pallbearers.

For those who are familiar with Catholic Sunday Mass, there will be some similar elements as the priest will choose appropriate and selected readings from scripture, offer a eulogy, and also offer Communion. Additional blessings upon the casket and a recessional will follow the end of the funeral Mass when the pallbearers carry the casket from the church and deliver it into a funeral coach—or hearse. Funeral goers then attend the gravesite for the committal of the casket.

While the readings and prayers at a Catholic funeral Mass may be particular to the decedent, the ceremony itself is steeped in tradition and is defined by the Church’s Canonical law.

A Catholic funeral Mass will be held inside the decedent’s particular local parish or church as it is also decreed by the church’s Canonical law. By holding the funeral Mass inside the Church, it is an opportunity to worship God, give thanks, and to commend the decedent into his care.

Not that long ago, it was tradition to hold the funeral within three days of passing, but because families live greater distances apart, leniency to that tradition has been expanded.

Immediate family, extended relatives, friends, fellow parishioners of the church and other community members may attend the funeral Mass. An obituary is commonly released in the local newspaper with notices of the ceremonies so that individual announcements need not be sent.

A Priest or Deacon conducts the ceremony with the help of a sacristan, who is an assistant to the priest, as well as altar attendants, Eucharistic assistants, and funeral directors. Family members and friends act as lectors (readers), pallbearers (those who carry the casket), and ushers.

The order of service includes the Priest’s blessing of the casket with Holy water, the draping of the pall—a cloth which symbolizes the decedent’s baptism into the church, followed by the procession to the altar, prayers, readings, and the Eucharist, which is the bread and wine offering during the service and is at the heart of all Catholic Liturgical ceremonies. Although not required, the Eucharist is a recommended offering as it symbolizes devotion to God.

There are also musical ministries, the Eulogy, a Homily, which is meant to connect God’s teachings with the congregation, and another blessing of the casket with incense and more holy water. The final act of the funeral Mass is the recessional from the Church itself where the pallbearers carry the casket from the church so that it can be delivered to the cemetery.

Display of the body and casket

Rosary beads may be displayed in the decedent’s hands and a crucifix may be displayed upon the casket, but no other adornments. While the casket may be open before the funeral Mass, it will be closed just prior to the processional and will remain closed thereafter.

Sacred Catholic hymns or songs, Catholic funeral readings, and prayers, sung and recited during the ceremony are meant to express hope, offer consolation, and remind the mourners about the resurrection of Jesus Christ so that the pain of death is ultimately uplifting.

If we die with Christ, we shall live with him,
and if we persevere we shall also reign with him.

Blessed are those who die in the Lord;
let them rest from their labors for their good deeds go with them.

How long is a Catholic funeral

Generally, a funeral Mass is a bit longer than Protestant Christian funeral. They will last between 45 minutes to an hour.

Etiquette at a Catholic Funeral 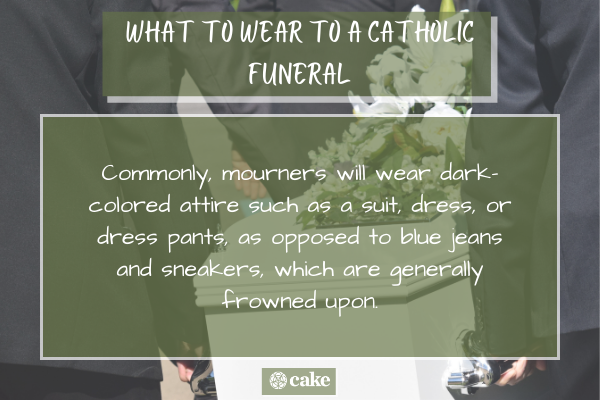 Like most funerals, a Catholic funeral is a somber occasion. Attendees should have a quiet and respectful demeanor. Perhaps you are wondering how you are expected to participate during the ceremony.

When you arrive at the funeral or wake, the family of the deceased may be outside greeting their well-wishers. If so, it’s appropriate to express your grievances before heading inside to find a seat and wait quietly for the service to begin.

Follow the lead of the Priest during the Mass. In general, you shouldn’t do anything at a funeral to draw attention. Sitting quietly is always the best option, and of course, don’t record the service on your cell phone or any other device.

At the end of the service, family members and mourners will carry the casket to a hearse. Listen for instructions as to where the casket will be interred.

Commonly, mourners will wear dark-colored attire such as a suit, dress, or dress pants, as opposed to blue jeans and sneakers, which are generally frowned upon. Take a look at our guide on what to wear to a funeral if you'd like more guidance.

The mood at a funeral is serious or somber because it is also a time to reflect on the crucifixion of Jesus, the resurrection, and the justification that death gives great meaning to life.

Sympathy cards are the most common and generally accepted gift. If a floral gift is offered, it’s generally sent through a professional florist along with a sympathy note.

A donation to the family to cover funeral expenses is also acceptable, but not necessary. The family may also suggest an alternative donation in lieu of flowers to the decedent’s favorite charity.

What Happens After a Catholic Funeral 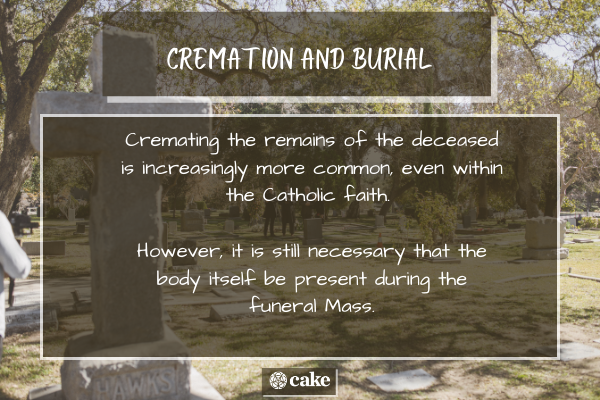 After a Catholic funeral Mass, it’s tradition to hold a reception and also gather together at the cemetery for a committal, which is when the Priest says a final prayer before the casket is lowered into the ground. If the decedent has chosen to be cremated, then a later committal on a separate day will take place.

The tradition of the motor processional from the church to the cemetery may require a police escort. Oftentimes, as this must be scheduled with the local municipality, there is no formal escort, so the funeral-goers will meet at the cemetery at a designated time.

Cremating the remains of the deceased is increasingly more common, even within the Catholic faith. However, it is still necessary that the body itself be present during the funeral Mass not only because it is tradition, but because the body itself must have a chance to be resurrected like Jesus.

The Catholic Church will allow cremation afterward, but the cremains must be buried and treated similarly to a casket, which means that they are not allowed to be scattered over water, for example.

Every area within the United States holds different traditions. Commonly, there will be a reception wherein the mourners gather and enjoy a meal together.

In some places that could be a coffee and cookie reception, while in others it may be a catered lunch in the church or at a reception hall.

Keep These in Mind Before You Attend a Catholic Funeral

Funerals are an important tradition in the Catholic faith. It’s when the body receives last rights and a ceremony of the deceased’s spirit moving onto the afterlife. By attending the funeral, you can show support to the bereaved, pray for the dead, and receive some closure. Hopefully, this guide has left you more prepared to attend catholic funerals in the future.