Each faith community has its own traditions, expectations, and funeral music. Catholic funeral traditions require hymns to be sung at the vigil, mass of Christian burial, and the rite of committal.

The leadership of the Catholic Church spells this practice out specifically in its “Order of Christian Funerals.” The four paragraphs written about funeral music explicitly state that the texts of the songs chosen for a funeral mass “should express the paschal mystery of the Lord’s suffering, death, and triumph over death and should be related to the readings from scripture.”

The music should be chosen to “uplift the participants and should help to create in them a spirit of hope in Christ’s victory over death and in the Christian’s share in that victory.”

“Organists or other instrumentalists, a cantor, and whenever possible, even a choir” should provide music for the services — in other words, it’s implied that pre-recorded music is not appropriate.

Here are some of the best funeral songs and hymns you may want to consider for your or your loved one’s service. And if you want more tips about planning funerals and tying up other loose ends after a death, take a look at our post-loss checklist.

COVID-19 tip: If you chose to use a virtual funeral using a service like GatheringUs, make sure online guests can hear the hymns. Ask your planner if they have the right digital file types, microphones, and speakers a few days before the ceremony. 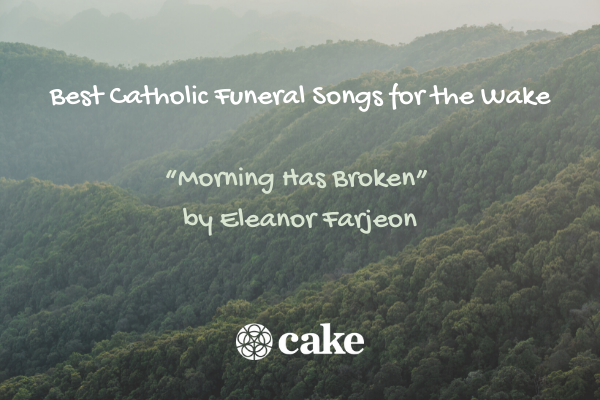 Mass is not celebrated at a Catholic wake but the “Order of Christian Funerals” indicates that the music for the vigil should be holy. Here are some ideas of hymns to play at your loved one’s wake.

1. “Morning Has Broken” by Eleanor Farjeon

This song gained popularity when Cat Stevens recorded a version of it in 1971 but it was initially published 40 years earlier.

A Benedictine Monk wrote this ancient song in the early 800s. This hymn asks the Holy Ghost to take rest in our hearts.

3. “Be Thou My Vision” by Dallan Forgaill

The origin of this song is a little murky, but “Be Thou My Vision” has been attributed to Forgaill, a sixth-century Irish poet. The text has been sung to an Irish folk tune since 1919.

Written by contemporary writer Tom Booth, “Be With Me, Lord” is part prayer and part hymn.

5. “How Great Thou Art” by Carl Boberg

“Christianity Today” ranked “How Great Thou Art” to be the second-favorite hymn of all time. This classic is based on a poem written by Swede Carl Boberg.

Written by an American gospel singer, this song’s simple lyrics pack a powerful promise. “Soon and very soon, we are going to see the king.”

Paulette McCoy has been singing in church all her life. She wrote the words to “O Loving God” to be sung to the tune of “Danny Boy.”

8. “May the Road Rise Up” by Tom Kendzia

This old Irish blessing has a new sound with Tom Kendzia’s “May the Road Rise Up.” The comforting lyrics will resonate with mourners. “Until we meet again; may God hold you in the palm of his hand.”

9. “How Can I Keep From Singing?” by Robert Lowry

Lowry, a Baptist minister, wrote this hymn. It has been recorded dozens of times and was published in the “Glory and Praise” Catholic hymnal. Enya’s version is particularly beautiful.

10. “For the Beauty of the Earth” by Folliott S. Pierpoint

This hymn was written in 1864. It was written as a comment on nature's beauty but also works as a beautiful piece to sing at a wake.

Though this hymn is popular on Easter Sunday, it’s a reminder that death is not final. 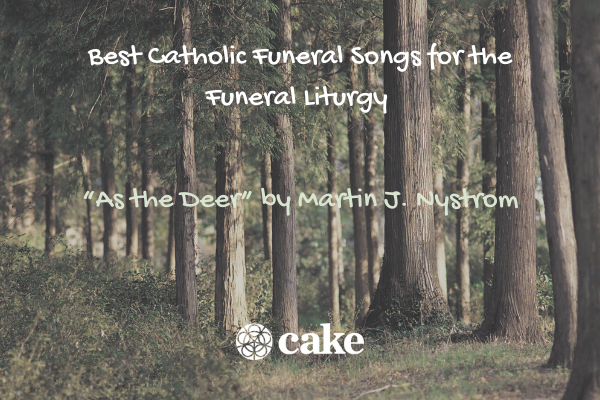 Ask the music director at your Catholic church for assistance picking out music for your loved one’s funeral.

You may also need to pick out songs to be played when the priest offers communion, besides picking out music for the congregation to sing.

Not all funeral hymns are centuries old. “As the Deer,” Nystrom’s famous hymn based on Psalm 42:1, was written in 1984. The text of the song compares a deer’s thirst for water to the soul longing for God.

Dufford originally wrote “Be Not Afraid” when faced with anxiety about his future. The title originally came from the words that the angel spoke to Mary when she was told she was with child.

The words “Blest are they, full of sorrow, they shall be consoled” bring comfort to mourners.

This beautiful song’s chorus reads, “Here I am, Lord. Is it I, Lord? I have heard you calling in the night. I will go, Lord, if you lead me, I will hold your people in my heart.” It’s based on Isaiah 6 and 1 Samuel 3.

Besides writing, “Come to Me,” Norbet also wrote the hymn titled “Hosea.” The lyrics came from the Book of Hosea and the Book of Joel. The words, “Long have I waited for your coming home to me,” make this the perfect choice for a Catholic funeral mass.

Toolan wrote the song in 1964 when she was teaching high school in San Francisco.

19. “I Know My Redeemer Lives” by Samuel Medley

Medley wrote “I Know My Redeemer Lives” in 1700 as a celebration of the resurrection of Jesus Christ.

20. “Let There Be Peace on Earth” by Jill Jackson-Miller and Sy Miller

Originally written for an international children’s choir, “Let There Be Peace on Earth” quickly gained in popularity. It’s often sung at Christmas but its hopeful promise and beautiful melody make it popular for funeral masses.

One of the most widely-loved hymns, "Amazing Grace," was written by Newton, who was a repentant slave shipmaster. The third verse that begins “When we’ve been there ten thousand years,” was not written by Newton. It was added to the song by Harriet Beecher Stowe in her novel “Uncle Tom’s Cabin.”

22. “On Eagle’s Wings” by Michael Joncas

This song is contemplative and was performed at many of the services of victims of the September 11 attack on the U.S. 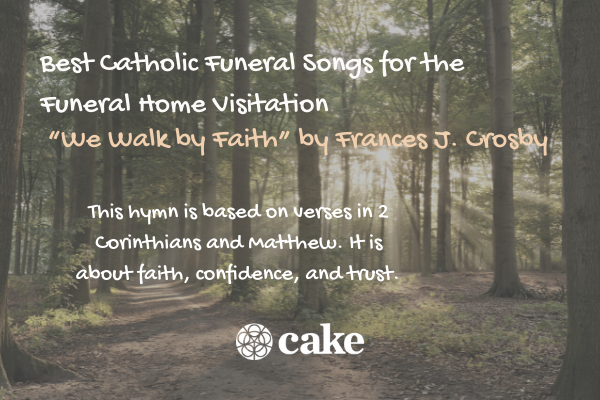 Consider playing some of these sacred songs in the background at your loved one’s visitation.

23. “I Will Never Forget You” by Carey Landry

This song by Carey Landry was written in the 1970s and is based on Isaiah 49.

24. “The Strife is O’er, the Battle Done” by Francis Pott

This traditional hymn is typically sung at Easter, but it may be a good choice of music to play at the funeral of a person who suffered from a long illness.

25. “The King Shall Come When Morning Dawns”

This song was translated to English by John Brownlie. Although the original lyricist is unknown, Brownlie translated the words from Greek to English in 1907.

26. “Crown Him with Many Crowns” by Matthew Bridges and Godfrey Thring

This song was based on the tune 'Diademata' by Sir George Job Elvey and appeared in many hymnals across several denominations. It was written in 1851.

29. “What Wondrous Love is This?” by Alexander Means

This hymn came out of the American South in 1811.

This hymn is based on verses in 2 Corinthians and Matthew. It is about faith, confidence, and trust.

31. “I Heard the Voice of Jesus Say” by Horatius Bonar

Horatius Bonar came from a long line of ministers in Scotland.

Haas wrote the lyrics of “We Will Rise Again” about several verses in the Book of Isaiah.

33. “For All the Saints” by William Walsham

Walsham was the Anglican Bishop of Wakefield, and he wrote “For All the Saints” in 1864. 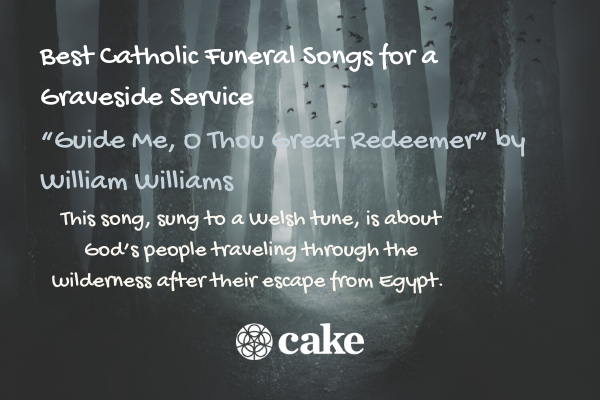 Graveside services are the perfect places for particularly poignant and hopeful songs.

34. “Guide Me, O Thou Great Redeemer” by William Williams

This song, sung to a Welsh tune, is about God’s people traveling through the wilderness after their escape from Egypt.

35. “In the Sweet By-and-By” by S. Fillmore Bennett and Joseph P. Webster

This gospel song is considered a standard in New Orleans-style jazz funerals.

36. “Dwellers in the Holy City” by Delores Dufner

This Victorian ballad has been popular for over a century.

37. “We Shall Sleep, But Not Forever” by Mary Kidder and S. George Shipley

This is the perfect song to be sung at a graveside service. “We shall sleep, but not forever. There will be a glorious dawn.”

38. “The Lord is My Shepherd” by Francis Rous

We are all familiar with the verses that inspired this hymn. It is based on Psalm 23, which is often read at funerals.

Thomas A. Dorsey was the father of black gospel music. He wrote this song while he was the musical director at a church in Chicago.

This hymn begins, “May the choir of angels come to greet you.” It offers the perfect sentiment as you leave your loved one for the last time.

Published in 49 hymnals, “Beautiful Beckoning Hands” was published in 1885.

Prolific writer Dan Schutte wrote the famous Catholic hymn “You Are Near” which is sung at many funeral services.

It is not clear who wrote this American folk hymn.

44. “When I Survey the Wondrous Cross” by Isaac Watts

Written in 1707, this is one of the first hymns that paraphrased text from the Bible instead of using the exact wording.

45. “When They Ring the Golden Bells” by Dion De Marbella

This old hymn was written in 1887 and has stood the test of time. 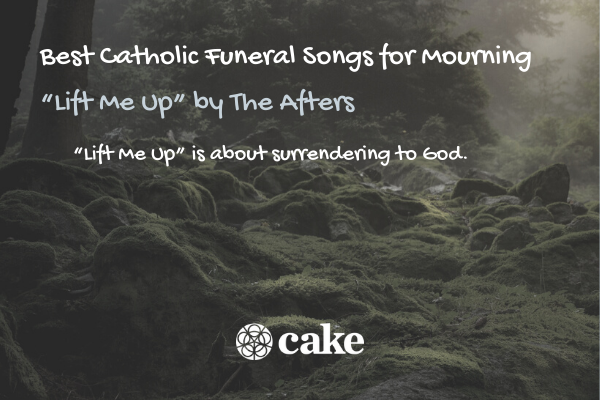 These songs may not be appropriate for a Catholic funeral service, but they may provide comfort to those experiencing profound grief.

This popular song was written by the lead singer of MercyMe, Bart Millard. The story of the band and this song was made into a movie in 2018.

Brumley wrote this gospel song while working in the cotton fields of Oklahoma.

It is unclear where this gospel song originated, but it is used in New Orleans jazz funerals.

The Afters is a contemporary Christian group from Dallas. “Lift Me Up” is about surrendering to God.

This song of hope, written for someone who lost a loved one, was written in 2008.

Inspired by Psalm 46:10, “Be Still My Soul” reminds listeners to place their lives within God’s hands.

52. “I Will Remember You” by Sarah McLachlan

When you miss someone, sometimes you just need a good cry. Listening to “I Will Remember You” will bring you to that point.

This song by country artist Kenny Chesney is about losing someone young. It’s about what that person would have been like if he or she had survived.

This heartbreaking song was sung by Joey Feek, who died of cervical cancer in 2016.

Whether this song is about heartbreak or death, it’s undoubtedly a classic. This song originally charted in 1944.

This list of hymns, spiritual tunes, and popular songs will surely help you navigate through your profound grief.