You may have no interest in learning the details of someone’s death. That’s understandable, especially if your loved one is the one who died. But the details mean everything to a coroner, a forensic scientist, or someone else who conducts an autopsy for their job. That’s how they ensure justice is served and peace is delivered to vulnerable families.

Interested in one of these careers or simply want to know more? Manner of death, cause, mechanism—what’s the difference? Here’s how you can distinguish each.

What’s a Manner of Death? 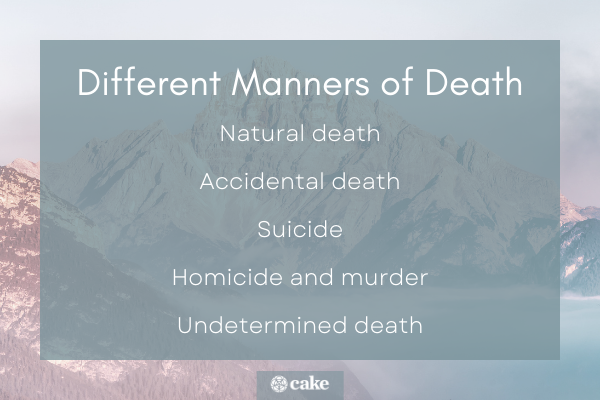 There are five manners of death. The coroner might know why they died. But that doesn’t mean they know how.

These five manners are classified as natural, accident, suicide, homicide, and undetermined.

Natural deaths are common. It’s easy to say that someone “died of old age.” But scientifically, old age isn’t deadly. There may be multiple causes of death, even for an elderly person. On government documents that determine these definitions, this type of death is referred to as a “natural process.” No one was meant to live forever, and the definition of a natural death reflects that. Natural deaths are also used to categorize disease. For example, cancer is also called a natural death.

The second category, accidental death, is one that’s exactly that: an accident. For instance, a natural could occur if someone leans out too far over the Grand Canyon in order to get that perfect selfie and tumbles into the canyon to his or her death. What happens if someone else was involved,? What if someone ties your shoelaces together as a joke? You could fall, strike your head, and pass away. Does that qualify as an accident? These cases are often up to the justice system and depend on unique circumstances.

The suicide category can cover a drug overdose whether the overdose was intentional or not. It also covers other types of suicides. Sometimes, it’s obvious whether a death is self-inflicted. At other times, it’s not. That means medical professionals must figure out the difference.

Homicides and murders are often confusing, too. All murders count as a homicide. On the other hand, not all homicides are classified as murder.

This is where different terms come in. If someone is held responsible for a death, they might be prosecuted under the term “manslaughter.” This is different from murder. Homicide relies on one person who is directly responsible for someone else’s death. If it fits this category, the coroner’s office will call it.

An undetermined death is something of a catch-all category. For instance, sudden infant death syndrome (SIDS), or sudden unexplained infant death, falls under this category. These deaths often go unexplained. In usual circumstances, SIDS falls under natural death. There’s no true explanation for it. But this classification can change after an investigation. An investigation of this type includes an autopsy, review of clinical history, and an examination of the death scene.

What’s a Cause of Death? 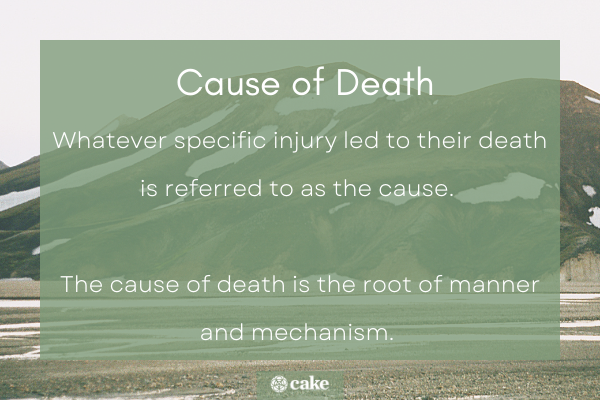 Medical examiners and coroners, in particular, deal with specifics. Tiny differences lead them to discover the truth. Those tiny differences can be quite telling. For instance, what if someone dies because they can’t get air? That’s the cause of death.

Whatever specific injury led to their death is referred to as the cause. But that still leaves a lot of room for interpretation. Did someone get intoxicated and fall in a pool? In that situation, he died because he couldn’t get air.

The cause of death is the root of manner and mechanism. It can sometimes be glaringly obvious. At other times, a detailed autopsy is necessary to find the truth.

What’s the Mechanism of Death?

The mechanism of death relies on important technicalities. A gunshot wound is a great example — but you could say that it’s obvious. Someone was shot so they die of a gunshot wound. There’s no other explanation, right?

The “mechanism of death” concept takes it a step further. A victim doesn’t truly die of a gunshot wound. He dies of excessive blood loss caused by the gunshot wound. The difference seems tiny, but it means a lot. That means the mechanism would be categorized as blood loss — and to use the technical term, he dies of exsanguination.

» MORE: A will is not enough. Get all the documents you need.

3 Differences Between Mechanism, Cause, & Manner of Death

It’s easy to determine the difference between the three in simple examples, such as violent death. In other cases, it gets a little murky. What about a heart attack? It might seem quite simple. T

he manner is natural, the cause is a heart attack, the mechanism is a lack of blood flow, right? That isn’t the case. Here are some key differences.

Focus on the mechanism

There is usually one cause and one manner of death. Unless the heart attack is artificially induced in a violent and criminal scenario, heart attacks are natural manners of death.

But the mechanism differs. It’s the most highly specific way to categorize how someone dies. In the case of a heart attack, the mechanism is likely cardiac arrhythmia or cardiogenic shock.

Think about the root cause

Diversity and focus are the main differences between manner, cause, and mechanism of death. One cause can result in many different mechanisms. And there are only five different manners. Some count six, if you lump pending deaths into the mix. But the cause is the most diverse of all these.

Think about dying from alcohol consumption, for instance. Alcohol would count as the cause. However, someone could suffocate on her own vomit or die from alcohol poisoning. Any manner of mechanisms could occur. And as a result, the manner of death could be categorized in a few different ways.

An absence of information is sometimes the enemy for some crime scenes. What if you find someone dead at the bottom of a staircase? Was he shoved or was it a suicide attempt? Was it an accident?

The manner of death is easy to miscategorize with an absence of information. The sheer amount of information-gathering tools helps. It can involve detailed medical techniques, surveillance cameras, and DNA evidence. Criminals are able to get away with less these days.

Whether you’re interested in moving forward in a medical examiner’s career or just curious, this information might be helpful or satisfy your curiosity. The next time you hear about a crime situation, try to determine the manner, cause, and mechanisms of death on your own. You might be able to do it—or not—depending on how much information you have to go on.

If you're looking for more information on picking up the pieces after a death, check out our guides on how to get a death certificate, how to write an obituary, and how to plan a funeral.