Since the dawn of time, humans created traditions and customs to ensure their loved ones rest well in the afterlife. Death in different cultures has come to mean different things, and many ancient people had strong beliefs about how to honor the dead. One such tradition found in Ancient Greece is Charon’s obol.

Charon’s obol is a myth surrounding the placement of coins on the eyes of the dead. According to legend, the coins were a bribe or payment used to ferry the dead into the Underworld. While this might sound strange in modern times, this practice brought peace to ancient people, ensuring their family members made it safely into the afterlife.

In this guide, we’ll uncover this rich history and tradition around Charon’s Obol. 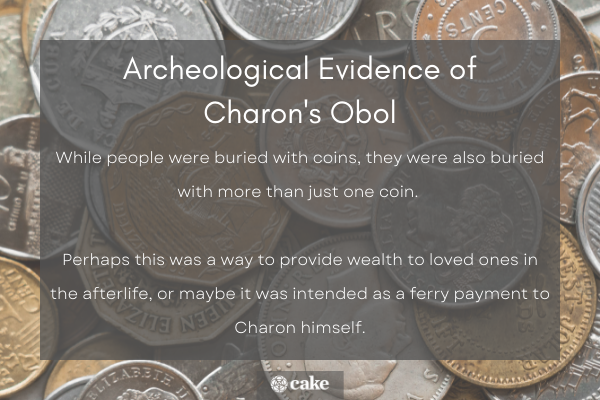 In Ancient Greece, keeping the gods and goddesses happy was essential. These were the all-powerful beings responsible for the earth as well as the afterlife. To upset the gods would bring destruction, they believed. It’s this mythology that led to Charon’s obols as part of ancient Greek funerals.

Those joining the Underworld needed to cross by boat. The ferryman of Hades was Charon. In Greek paintings and poetry, you’ll frequently find depictions of Charon taking the dead through the river to the Underworld.

The important thing to know about Charon is that he did not ferry passengers for free. According to Greek legend, he needed to be paid an obol for his service. An obol was a type of coin from ancient Greece. The only way to make sure he got his payment was to bury the dead with a coin on their eyes or even in their mouths.

What happened if the ferryman didn’t get paid? Greek belief argues these souls wander the earth side of the river for hundreds or even thousands of years before they’re permitted to cross.

While Charon’s obol is frequently referenced in ancient literature and art, it’s also important to look at the archeological research from the time. Ancient graves discovered today tell a story that isn’t always consistent with the myth of Charon’s obol.

While people were buried with coins, they were also buried with more than just one coin. Several coins, usually of higher value than an obol, were found on various parts of the body. Perhaps this was a way to provide wealth to loved ones in the afterlife, or maybe it was intended as a ferry payment to Charon himself.

Unfortunately, due to rampant grave robbing throughout history, it’s unlikely researchers will ever have the full story of these ancient graves. 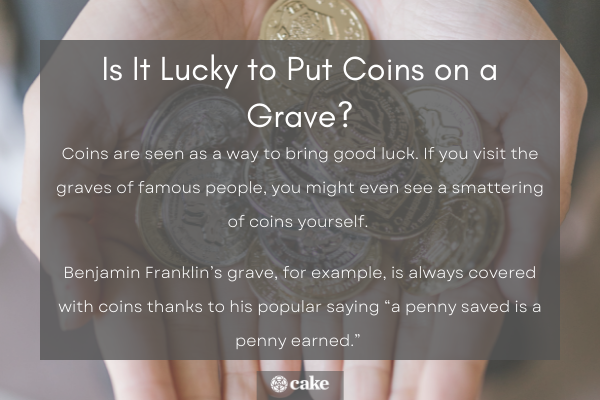 Today, putting coins on the eyes of the dead is still a practice in some parts of the world, though not necessarily for the same reason as in ancient Greece.

You might have heard of this practice in Victorian England or spotted it in a movie, though you might not have recognized the significance at the time.

Coins on the eyes of the dead in Victorian England

In the Victorian era, it became commonplace for someone to place silver coins on the eyes of the dead. They weren’t paying Charon’s fee, rather, this was a purely cosmetic action. Though the eyes of the dead are manually shut, they often pop open frequently on their own. As the body dehydrates, the eyes take on a sunken expression that people in Victorian England found upsetting.

Since wakes were common, people wanted to do something to cover these unsettling eyes. The silver coins were heavy enough to keep the eyes closed until the burial.

Today, this isn’t necessary since plastic fillers are placed by the mortician behind the eyes to avoid the sunken appearance. However, it is still common to cover the eyes of the deceased until the body is taken to a funeral home or buried.

Coins on graves of veterans

While it’s not common to bury bodies with coins on the eyes of the dead, coins have taken on a new meaning without graveyards. If you visit a modern cemetery, it’s not uncommon to encounter headstones with coins on them. What’s the meaning of these coins on graves? As you might have guessed, it’s not related to the Greek myth.

The meaning is actually tied to the American military. A coin left on the headstone or the grave plot is a way to communicate with the family of the deceased. Each type of coin has its own meaning within the military.

For example, a penny means that you’re a serviceman or woman and you visited the grave of another military veteran. If you leave a quarter, you’re indicating that you were present when the individual died during their service.

Each coin means something different, and leaving one is a sign of respect for veterans and their families. These coins go towards maintaining the cemeteries or paying costs for other veterans’ burials. Though this practice has its own meaning related to the U.S. military, it’s interesting to trace this custom back through ancient history.

Coins on graves to bring luck

Finally, coins are seen as a way to bring good luck. If you visit the graves of famous people, you might even see a smattering of coins yourself. Benjamin Franklin’s grave, for example, is always covered with coins thanks to his popular saying “a penny saved is a penny earned.”

Leaving something when you visit a grave has long been a sign of respect. While most people bring flowers or candles to graves of their loved ones, you don’t have to go to such lengths, especially if you’re casually visiting. Leaving whatever you have with you of value (like a coin) is a way to show the grave is not forgotten.

Leaving a coin also has positive implications for the living. Leaving a penny on a grave is a way to spark good luck in your own life. This is a subtle nod at the Charon’s obol myth of burying the dead with coins. It’s all about paying respect to the deceased and honoring their memory with a small act of service.

Paying Respects to the Dead

Charon’s obol is a unique way of honoring the dead by ensuring safe passage into the Underworld. While this Greek tradition might feel disconnected from modern days, as you can see above, it’s still not uncommon for people to place coins on graves as a sign of respect. Mythology and tradition play into our modern burial practices, and it’s exciting to watch these customs develop over time into what we consider “normal” today.

How do you want to be respected after you die? To make these decisions for yourself, start end-of-life planning. Whether you connect with the tradition of coins on graves or something else, this is your choice to make for yourself.