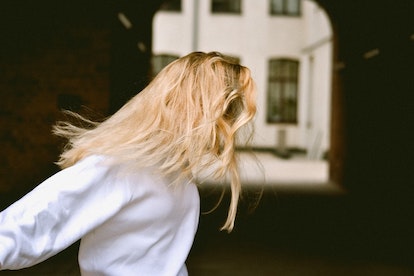 Planning or attending a child’s funeral is an experience no one ever wants to go through. Sadly, sometimes a child’s life ends too soon. While you can’t bring them back, you can try to ensure their funeral serves as a fitting tribute to their memory.

One way you may do so is through poetry. Classic funeral poems can help us express feelings we otherwise might struggle to find the right words for. They can also offer some comfort to those coping with a tragedy.

Whether you’re planning on reciting a poem at the funeral of a child, teenager, or baby, consider the options here. One of them may be precisely what you’re looking for.

(Tip: You might also want to review funeral program templates to determine the best time for reciting a poem during the service.)

Poems for a Teenager’s Funeral

Making sense of a teenager’s death is always a struggle. It feels indescribably unfair when someone who was just blossoming into an adult passes away. However, as these examples demonstrate, poetry can help us celebrate their life at the very least.

1. "If I Can Stop One Heart from Breaking" by Emily Dickinson

A teenager’s death is always tragic. That said, it’s worth remembering that someone who reached their teen years was at least old enough to have made a positive impact on the lives of others.

Remembering how a teenager played such a role allows us to memorialize them in a way that highlights the value of their life, instead of our sadness now that it’s over. This Emily Dickinson poem can help you convey that message.

2. “Nothing Gold Can Stay” by Robert Frost

Although this classic is appropriate for anyone’s funeral, regardless of age, it may be a particularly ideal choice for a teenager’s funeral, due to its usage in the popular young adult novel The Outsiders.

It’s also short enough to use in other ways after any loved one’s death. For example, you might include it as part of an obituary for a husband, wife, or any other close relation.

In just three short lines, Jim Moore paints a picture of a nameless lost friend who lived with the passion and vigor we tend to picture when we think of some teenagers.

You might consider this poem if you’re worried you’ll become too emotional to complete a recitation after a few moments. While all the poems on this list are relatively short, this is one you can recite in literally five seconds. Despite its length, it still contains a wealth of emotion.

If a teenager who passes away has siblings close to them in age at the time of their death, one of those siblings might be mature enough for the responsibility of reciting a poem at their funeral.

A teenager who lost a brother close to their age may consider “Mozart Songbook” by Joan Larkin. It’s a short but touchingly personal ode to the admiration some younger siblings have for their brothers.

5. "The Broken Chain" by Ron Tranmer

This ultimately inspirational and uplifting poem describes the unexpected death of a loved one as an experience that feels like a family chain breaking. At the same time, it offers the hopeful message that one day the family will be together again in a better place.

Poems for a Child’s Funeral

The joy children spark in the world has inspired many poems. So has the pain we feel when children die too soon. These poems evoke that despair but offer some much-needed hope as well.

6. "While Waiting for Thee" by Helen Steiner Rice

Like many funeral poems, this one offers comfort by expressing the belief that someone who has died is simply in a different place now and you’ll meet again someday. It’s perfect for a child’s funeral thanks to lines that describe a lost loved one as “playing tag with the wind” and “singing in the sunshine.”

7. “Seasons of Grief” by Belinda Stotler

“Seasons of Grief” is an honest poem that openly acknowledges how someone may feel they can no longer go on and face life after a tragic death. However, it soon takes on a more hopeful tone, explaining how something as simple as looking at a photo of a lost child’s “playful smiling face” can be enough to bring a sense of peace.

It’s also worth noting that this poem doesn’t mention the specific nature of the relationship between the speaker and the one they’re mourning. You could potentially interpret some lines as references to romantic love.

That makes this a particularly versatile poem. For instance, along with working as a child’s funeral poem, it could also serve as part of a eulogy for a husband or wife.

This poem strikes a delicate balance. It genuinely touches on the sorrow and pain of those who lose children. However, it also rejoices in the idea that a child who passed away too soon at least never had the chance to endure that kind of pain. Unlike those who reach adulthood, they enjoyed a life filled with almost nothing but love.

9. “To Theodore” by George Marion McClellan

With its mentions of “gay laughter leading quick and stormy tears” and tucking a child into their “little trundle bed,” “To Theodore” masterfully evokes both the grief parents feel when a child dies, and the small comforts they may enjoy when remembering the happiness their child brought to them in life.

This is a poem worth considering if you’re religious. Although it doesn’t specifically reference one single religion, some of the language evokes Christian imagery and themes in particular.

The poem describes a child as a gift from a higher power. It also explains how one day that higher power will call the child back, and although those left behind will mourn, they’ll also know it’s all part of a plan they may one day understand.

Poems for a Baby or Toddler’s Funeral

The indescribable pain of losing a baby or toddler may not be a wound poetry alone can heal, but poems such as these can still offer a way of seeking understanding.

Marilyn Nelson took inspiration from church records which mentioned a funeral for a stillborn child when writing this poem. However, the poem doesn’t overtly state that the baby it describes was stillborn, but instead merely describes how the baby won’t get the chance to have certain early life experiences. Thus, “Little Box” is a deeply sad but respectful poem for a baby’s funeral.

Most people can’t imagine the pain of losing a baby until they actually experience it. This poem, about not appreciating just how long a lifetime can be until you realize you must now live it without someone you loved, captures that truth.

We feel such tremendous despair when a baby dies because we feel they never had the opportunity to enjoy the journey of life. This poem, though, suggests that our time on Earth is just part of a much longer journey.

Some people spend many years here, while others may move on to the next branch of the journey sooner, but their existence certainly hasn’t ended. It’s only just begun.

Some people find comfort in the belief that a child who’s passed on has become an angel or similar, and they now possess a wisdom far beyond their years.

Someone who shares that belief may appreciate this poem, in which a lost household member who liked to “play” and “smile” like a baby or toddler during life now speaks to those mourning them, explaining how all is well, and they will see each other again.

This short but incredibly moving Mark Twain classic is ideal for a baby or toddler’s funeral, featuring language very similar to the type you might use in a lullaby for a baby. Its imagery also has a sweet and gentle quality that could help people find peace during an incredibly difficult time.

Again, no poem can make up for the absence of a beloved child. That said, poems such as these exemplify the way poetry can offer some healing.

If you're looking for more ways to remember a child that died, read our guides on how to deal with the loss of a grandchild and gifts for parents who lost a child.