Members of the Chinese culture can be quite superstitious, especially when someone dies. A lot of rules and rituals are followed in the Chinese culture — and if traditional funeral etiquette isn’t followed, it’s said to bring bad luck to the family.

Younger relatives are in charge of planning and prepping the funeral for elders and women play a predominant role in funeral planning.

COVID-19 tip: If you're planning a virtual Chinese funeral using a service like GatheringUs, you can still adapt many of these traditions for your online guests. Just speak with your funeral director or event planner to help you figure out the logistics or any limitations.

What Happens at a Chinese Funeral? 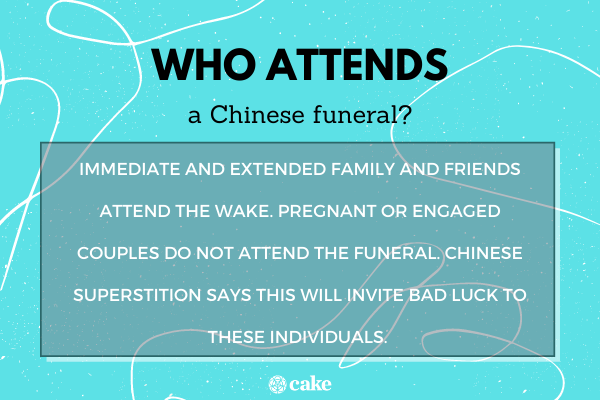 A Chinese funeral is a structured event and many pieces are incorporated into the process. Appropriate attire and adherence to the rules is expected.

A formal invitation is often sent in place of a standard death announcement. Every person is expected to carry the funeral out according to custom. Regardless of financial means, the rituals and rules are encouraged.

The wake can occur in a couple of different places. For example, if the deceased died in the home, his or her casket will be placed inside the home. If the person died outside of the home, the casket will be displayed in a courtyard. Relatives and friends visit often and bring gifts of candles, fruit, and flowers.

The family is expected to hold a 24-hour vigil next to the casket. During this time, fruit, candles, and flowers are all placed inside the casket with the deceased.

The wake is often held inside of the home or surrounding courtyard. Some non-traditional wakes may occur at a funeral home. Unmarried individuals who die are often laid out inside a funeral home.

Immediate and extended family and friends attend the wake. Pregnant or engaged couples do not attend the funeral. Chinese superstition says this will invite bad luck to these individuals.

It’s a tradition for women to wail in grief. The larger the deceased’s inheritance, the louder the wailing. An altar is built around the casket and incense and candles are burned. Visitors bring white money envelopes to help contribute to the funeral fund. The amount of money received varies and the individual sum of the money gifted is always an odd number.

Gambling in the courtyard may take place to offer a distraction to the family and keep them alert during the wake.

At the end of the wake, the casket is covered with a yellow and white holy paper. This paper symbolizes protection. Some family members will look away during this time as they believe it could bring bad luck.

Role of prayers, songs, and chants

Prayer plays a large role in the wake. Family members offer continuous prayers and burn joss paper. The Chinese believe that by burning joss paper and prayer money, the deceased will have an abundant afterlife. Family and friends bow at the casket as a sign of respect.

You’ll hear flute, gongs, and trumpets in a Buddhist ceremony. Most Chinese funerals will include a variation of chanting and music. Traditional Chinese culture believes that loud music will keep evil spirits away.

How long it lasts

A Chinese wake can last between five to seven days and depends on the age and social influence of the deceased. Some funerals can last up to 45 days. 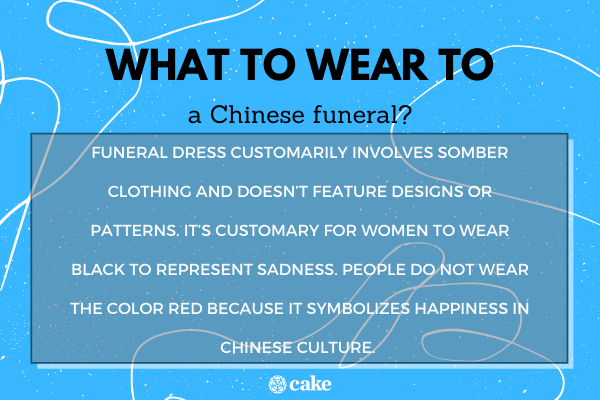 The Chinese government recognizes five major religions, Buddhism, Catholicism, Islam, and Protestantism. The practice of any other faith is strictly prohibited in China.

These religious subcultures play a role in the structure of funerals. Regardless of religious beliefs, Chinese culture follows basic rules and traditions.

Note: No matter what a family's culture and traditions are, planning or attending a funeral is hard. If you'd like some help and guidance through the process, check out our post-loss checklist.

Funeral dress customarily involves somber clothing and doesn’t feature designs or patterns. It’s customary for women to wear black to represent sadness. People do not wear the color red because it symbolizes happiness in Chinese culture.

Chinese funerals are somber — the funeral is the family’s time for deep mourning. Paid professionals are often hired to wail and cry throughout the funeral. Crying and wailing is a sign of loyalty and respect to the deceased.

Parents do not offer prayers if the deceased is their child. In some cases, this kind of service is conducted in silence.

Chinese culture considers anyone over 80 to have had a long, full life. This type of funeral service is viewed as a celebration and mourning doesn't take place.

Much like the wake, family members will bring fruit, incense, and money to the funeral service.

The Chinese funeral flower is the iris and it’s common for relatives to bring wreaths made of white irises and it’s customary for the deceased's employer to bring a wreath wrapped in Irises and money. This is to show gratitude for the deceased’s hard work and service to the company.

As a token of gratitude, the family of the deceased hands out red envelopes filled with coins. These envelops signify the end of the mourning period and a new beginning.

What Happens After a Chinese Funeral? 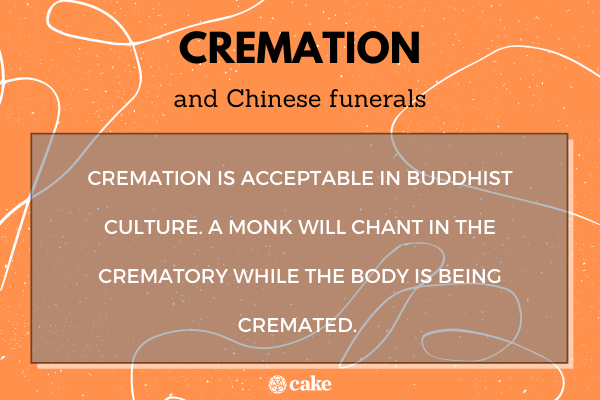 What happens on the day of the funeral and how it is carried out makes a major impact on the deceased's family. Dogs howling, dreaming of snow, and clipping your nails are only a small handful of things that are said to bring bad luck. The family is cautious about everything it does before, during, and after the funeral.

The deceased is either buried or cremated, depending on the deceased’s belief system. If buried, this will take place on a hillside. The higher the hillside, the better it is for the deceased, according to Chinese superstition. A large portrait of the deceased sits on display near the casket. The family members will each pour a handful of dirt on the casket if the deceased is buried.

Cremation is acceptable in Buddhist culture. A monk will chant in the crematory while the body is being cremated. The family might also lead the chanting at the crematory. Cremated remains are given to the family and placed in a shrine or urn garden.

Mourning and remembering the deceased

Ceremonies, rituals, and mourning last up to 100 days. On the 7th day after the funeral, the family believes the soul of the deceased will visit. They stay in their rooms and powder is sprinkled around the door to confirm their presence.

Chinese families visit the grave together every year. They clean the grave and make sure it is well kept. Incense, food, fruit, and other gifts are placed on the grave.

Family members will talk to the deceased as if they are present by sharing stories and making jokes.

What Can Chinese Funerals Teach Us?

The Chinese spend a lot of time with pre- and post-death planning. They view this as a rite of passage and the process is treated with respect. Chinese display their love and admiration for family through rituals and following superstitions.

These traditions and rituals have been passed down for centuries. The Chinese treat life and death with reverence, care, and respect. The Chinese do everything they can to support the deceased on his or her journey in death.