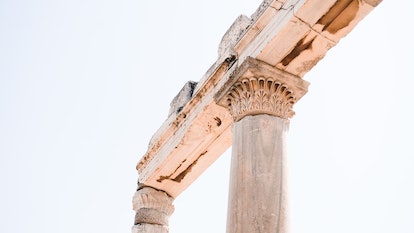 Burial customs have existed since the first person died, leaving people with the question of the proper way of dealing with the body. Over time, two prominent methods have been used everywhere: cremations and in-ground burials.

The style, shape, and decoration of these urns are as diverse as the cultures that used them but all served the same purpose: to hold the ashes of the dead.

Tip: If you're looking for something very unique (think a game, a classic car, or instrument of choice), you can custom order an urn from a store like Foreverence. You submit a design idea or sketch, then the company designs and 3D prints your urn, so you get a 100% unique container.

In cultures and religions where a deceased person was cremated, cinerary urns were used to house their ashes. With these cinerary urns, they were for one use only—to bury the cremains of the dead in a dedicated cremation cemetery or a cremation plot as part of a cemetery. These ancient urns for ashes can be found in numerous cultures across the world.

In contrast to ancient practices, today’s modern urns can either be buried or used for an above-ground burial option.

Difference between a modern urn, cinerary urn, and sarcophagus

Many societies have sought out respectful and religiously sanctioned methods for taking care of their dead. Over time, cremation and burial have become the two most prevalent options. With these practices, urns, sarcophagi, and modern coffins are traditionally used. Though used similarly, there are slight differences between each item.

Modern urns hold the ashes of a deceased family member and can be buried in a cemetery or placed in a columbarium. If you are looking for inexpensive things to do with ashes, urns can also be placed in a special area at home such as a garden, altar, or mantle.

Cinerary urns were used in ancient times. Like modern urns, they hold the cremated remains of a deceased family member. But as mentioned above, these were most often buried in cemeteries rather than displayed at home.

A sarcophagus is similar to what is considered a modern-day coffin. Sarcophagi, however, were used by ancient civilizations and were crafted out of stone. They were often decorated with a sculpture of the deceased person and had an inscription to accompany the carving. The use of sarcophagi is most commonly found in ancient Egypt, Rome, and Greece.

Cinerary urns were used throughout the ancient world in a time when cremation was widely popular. Their use in funerary customs continued, with the spread of religions such as Buddhism, Shintoism, and Taoism across Asia. Archaeologists have found cinerary urns all over the world from Scotland and Rome to Korea and Japan.

In ancient Scotland, cremation was the preferred method for dealing with the dead. After a deceased member of a clan was given a proper ceremony and cremated atop the funeral pyre, the remains would then be placed into a cinerary urn.

These urns would be made out of pottery and were commonly decorated with edging and designs throughout. An animal skin or rock would be placed on the opening to serve as a type of lid, and the jar would then be buried upside down in a cremation cemetery.

In pre-Roman Italy, the local people inhabited small villages that were easy to defend. Their cities later became dwelling sites of the Etruscans.

Thanks to excavations, we’ve learned how these people lived and what they believed about burial rites and rituals. When a member of the family passed away, they would first be cremated and celebrated. The Eturian people placed their ashes in a special cinerary urn, and eventually buried the urn in a small pit in a cemetery.

The cinerary urns used to house the ashes of loved ones were shaped and molded to look like the huts they lived in during their lives on earth. Miniatures of personal items were also placed with the urn, such as razors, brooches, knives, and pottery. It is believed that these items were to help the deceased in the next life. The urn and personal items were all placed into a large pottery vessel and then buried in a pit in the cemetery.

The Etruscans, living in Northern Rome, frequently used cinerary urns and ash altars to house their dead. These were often made of terra-cotta and were ornately decorated.

The cinerary urns built as rectangular boxes shared two prominent features. They tended to depict a scene from Greek mythology on the side of the box. On the lid of the box, there was a sculpture of a man or woman, depending on who was contained inside. The scene from Greek mythology was most often a battle scene and held no correlation to the gender of who was inside. These boxes were ornately crafted and contained the inscription of the name and title of the person who died.

Other Etruscan cinerary urns are typical of those made on a potter’s wheel, complete with a pottery lid. These were fired in a kiln and glazed or gilded. Even on these smaller vessels, Greek mythological creatures decorated the urn. Though the Etruscans had a culture unique and separate from Greece, they were very influenced by Greek art and mythology.

In ancient Rome, there were two common practices for dealing with the dead: burial and cremation. Cremation was a popular option, and many took advantage of the process. Romans of all classes, from servants to the noble-born used cinerary urns to house the ashes and bones of their loved ones and commemorate their lives.

Unlike modern urns we are familiar with today, Roman cinerary urns came in a variety of sizes, and shapes were made from a variety of materials. Like the Etruscan cinerary urns, they often displayed ornate carvings and elaborate inscriptions. Many of these urns were called “ash altars” or “ash chests” since they were larger, more substantial in size, and shaped like chests.

Roman cinerary urns were used in every class of society from slaves all the way up to the emperor. Marble became the material of choice to use thanks to both its function and appeal. Most cinerary urns were decorated with miniature portraits of the deceased or scenes where the deceased were shown to be carrying out a task. Many were inscribed with the person’s name and some noted accomplishments in life.

From records and archeological finds, we know that the people of Japan began the practice of cremating their dead as early as the 7th century. To this day, the prominent religions of Buddhism and Shintoism both encourage cremation rather than burial.

In Japan, cinerary urns were used to house the ashes of their cremated dead prior to burial of the urn itself. Cinerary urns were often made of pottery, shaped on a wheel, and closed with a lid shaped to fit the vessel. While some were left unglazed, many were glazed in one color, others in multiple colors, and urns for the wealthy or those in government might even be gilded.

Beyond the colorful glaze, some were decorated with scenes from paradise or the afterlife. The person’s name would also be inscribed somewhere on the urn for proper identification.  Cinerary urns were not only used for direct burial after a loved one was cremated. If a person died in a province far away from their family, the person would be cremated and their remains placed in a cinerary urn. The urn would then be sent back to the person’s hometown and returned to their family for proper burial.

Most cinerary urns were buried as-is. However, one jar was discovered in a limestone encasement with just enough space carved out to hold the urn. Those with special stone casings were often reserved for particularly special members of the community.

In the 4th century, Buddhism was introduced to Korea. With the introduction of the religion, cremation became a widespread practice, and burial of the dead became nearly obsolete. Cinerary urns were also created on pottery wheels and decorated afterward. It was typical to see most urns without glaze, contrary to other practices from other cultures such as Japan.

But in Korea, these cinerary urns were decorated with designs stamped into the pottery before the vessel was fired in the kiln. Those that were glazed were often decorated with colorful patterns such as flowers common to the region.

Though many cinerary urns were directly buried, the fancier urns were placed in a stone jar to protect it from the elements.

An Ancient to Modern Custom

Though modern urns got their roots in ancient practices, people from both time periods are focused on the same goal — honoring the life and preserving the remains of deceased friends and loved ones. No matter what type of urn is used or how ornately decorated it may be, the most important part is in celebrating the life of the person it contains.

A beautiful, modern option for keeping a loved one's memory alive is a memorial diamond created from ashes. Some companies, like Eterneva, create lab-grown diamonds and allow you to pick from several cuts and colors for your gemstone.