Leaving mementos and other signs of remembrance on graves is a long-held human tradition. While the most common thing to leave on graves is flowers, this isn’t the only way to pay tribute to those who passed. In the Jewish faith, people leave stones. In Latin America, it’s common to leave candles.

Another tradition that’s developed out of both mythology and U.S. military culture is the leaving of coins on graves.

In ancient times, coins were a way to prepare loved ones for their afterlife. They were a bribe to ensure safe passage to the world of the dead. Over the years, the meaning behind this practice shifted. Today, coins are commonly left on military graves as a sign that they’ve been visited by living soldiers. This currency has a new adaptation, serving as a way to honor those who died in service of this country.

In this guide, we’ll dive deeper into this tradition to understand how it fits into military funerals and other ancient memorial practices.

Meaning of Placing Coins on a Grave 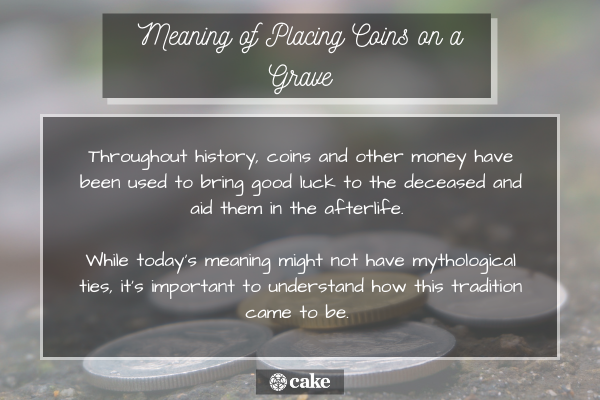 The coins placed on graves carry a number of meanings. Throughout history, coins and other money have been used to bring good luck to the deceased and aid them in the afterlife. While today’s meaning might not have mythological ties, it’s important to understand how this tradition came to be.

Nowadays, when we talk about leaving coins on graves, we are most likely referring to the graves of soldiers. While this is an ancient tradition, it adapted to new needs and practices. If you have a loved one who was buried at Arlington National Cemetery, you’ve likely seen these piles of shiny coins yourself. So what do they mean?

Different meanings behind this military practice floated around social media platforms for years. However, they’re all connected by a similar practice of respecting those who served in the armed forces.

When you see a coin on the grave of a serviceman or woman, this is a sign that another member of the military paid their respects recently. According to tradition, there is a meaning behind each type of coin. Here is a simple breakdown:

This language of coins is a way for active servicemen and women to communicate with the families of those who served. Since they might not have the opportunity to speak in person, this is a way to pay respects without overstepping boundaries.

What happens to these coins that are left on graves? They don’t stick around on the site for long. The cemeteries, typically military cemeteries, collect these coins for a good purpose. They’re used for cemetery upkeep and to help pay for the burial costs for other veterans. The service people who leave these coins understand they’re going towards these things, and this is one of the reasons to continue leaving coins.

For non-military members, coins on the grave are a practical way to honor a loved one. First of all, they’re a way to pay respects and offer good luck to the deceased. Why are coins (pennies in particular) a sign of luck? Ben Franklin might be to blame.

Ben Franklin famously said, “a penny saved, is a penny earned.” Because of his famous saying about the importance of personal finance, visitors to his Pennsylvania gravesite developed the tradition of tossing pennies on his grave. Today, the gravestone itself is severely damaged from hundreds of years of coin tossing. While efforts are underway to fix his grave, many have adopted this good luck tradition of tossing pennies into the graves of their loved ones.

In other cultures outside of the United States, coins are a practical solution. The main reason is that leaving coins on graves is less expensive than flowers. Coins, food, trinkets, and other mementos are popular in Latin America, Europe, Asia, and beyond.

Today, people leave coins as a sign of respect. It shows the world that the deceased is still in the family’s thoughts, and they also last longer than flowers. Think of these coins as a symbol. They’re a lasting way to emphasize the value of the dead in many cultures.

History of Putting Coins on Graves 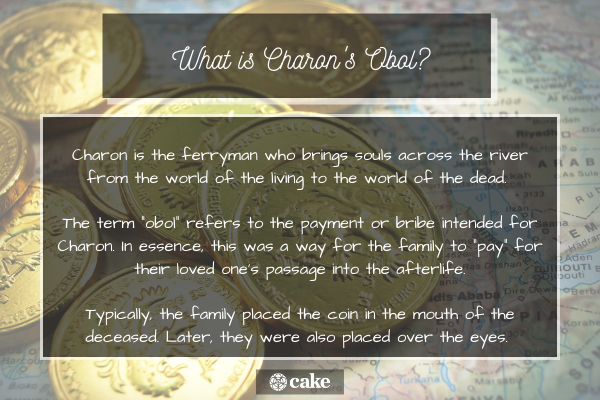 As we’ve mentioned before, putting coins on graves dates back centuries. The history behind this tradition within Greek mythology might surprise you, especially since it’s adapted for military use today.

Again, it all comes back to paying homage to the deceased and aiding them in their afterlife.

Though you’ve probably never heard this term before, “Charon’s obol” has a lot of significance in Greek mythology. Dating back to the ancient Greeks, this myth reflects the history behind an ancient custom. As soon as Greece created its own monetary system, this became a common practice.

So what myth does Charon’s obol refer to? Charon is the ferryman who brings souls across the river from the world of the living to the world of the dead. The term “obol” refers to the payment or bribe intended for Charon. In essence, this was a way for the family to “pay” for their loved one’s passage into the afterlife.

Typically, the family placed the coin in the mouth of the deceased. Later, they were also placed over the eyes. The family buried their loved ones with this coin. There were coins specifically used as Charon’s obol, and they usually were too thin for normal use as a payment. Charon’s obol began in Greece, but it spread throughout the New East, western Europe, and beyond.

Today, small coins are still left on many gravesites. Coins are cheaper than flowers in many places, so coins follow grave flower etiquette. In many cultures, this is a way to assist with their loved one’s passage into the next life.

While most people don’t believe they’re paying Charon his bribe, the intention of safe passage is still the same.

How did this ancient Greek tradition become the military practice known today? To understand this, we need to look back to the Vietnam War. During the Vietnam War, political death over the war was a cause of many arguments and disagreements. Instead of contacting the soldier’s family directly to offer condolences, servicemen and women started to leave a coin on the grave.

This was a practical solution to the growing communication gap due to the war. In addition, some Vietnam veterans left these coins as a “down payment” to buy their fallen friend a beer or play cards when they’re reunited in the afterlife.

It’s not uncommon for these coins to be what’s known as “challenge coins.” A challenge coin is a coin with the emblem of the deceased’s military company or unit. They’re left by fellow soldiers to pay tribute to their service to the United States as well as their family members.

These coins are not collected by the ground staff like other coins at the cemetery. Over time, these coins and regular coins have come to possess a large significance within U.S. military funeral tradition.

Tip: Have you considered other ways you might want to be remembered? Consider requesting your ashes to be turned into a memorial diamond, that your loved ones create a custom urn of your favorite object or another idea that's uniquely you.

The Currency of the Deceased: A Sign of Respect

The next time you spot coins on a grave, reflect on the long road of traditions that got them here. From Charon’s bribe to the Vietnam War, honoring those who pass on is a way to bring comfort and peace to the family.

These traditions join people together for centuries, and they’re a small reminder of the value of the short time we spend on earth. Though life is fleeting, it’s worthwhile.

Everyone makes their own decisions when it’s time to start end-of-life planning. From preparing for a military funeral to paying homage to ancient traditions, the choice is yours. What is the impact of your life? How will your loved ones remember you? These are the questions that bring us all together.