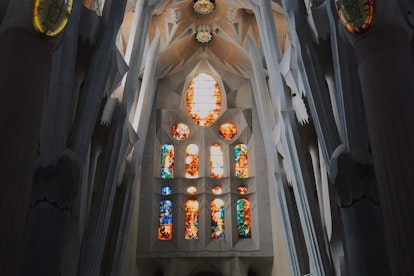 However, columbariums have an important history, and maybe something you’ve seen but not known the specific name for them. Columbariums have been used in the past to bury members of the military. A columbarium might be the perfect option for your funeral planning.

Columbariums gained popularity for many reasons as another option to store cremated remains. To make it work, a loved one’s remains are cremated, stored in an urn, placed in a “niche” or individual unit to store the urns, and permanently fixed into a wall with other urns. Columbariums are usually located in a cemetery or graveyard. Why go this route, though? Many families store urns in a prominent place in the home to keep their loved ones close.

For some families that can be a poor option. If you have many family members who have passed on, it may feel a bit overwhelming to have many urns in a house. Furthermore, keeping something valuable as an urn full of ashes can be stressful if you have pets or small children who are prone to knocking things over.

There are other reasons columbariums are useful. For some, it could be painful to have the remains of a loved one nearby. Creating some distance can help with managing the loss and healing. In addition, family members may want to visit the remains. It can be a little awkward for them to visit your living room each time they want to pay their respects to your grandmother. A columbarium can provide a public, equal-access location for loved ones to gather around and visit.

However, when planning, make sure to state which one you would like. A columbarium refers to the broader structure that houses many remains. It may be shared among many families or others because of the ability to store many urns in the structure. In layman’s terms, it is a collection of cubby holes in a wall structure.

Columbarium niches refer to the individual unit that your loved one’s ashes may be stored in. There are three types, and you can pick the one that best suits your fancy. There are different types of columbariums, too. Some are large and public, while others are small and private. Columbariums can also be indoors or outdoors. They’re often part of cemeteries, but may also be in a separate area on the grounds.

When it comes to selecting a specific niche, you have the option of having a granite-front, bronze-front, or glass-front. A granite-front can be sealed, which may provide some extra security to alleviate any concerns you may have. But with a granite front, it is difficult to personalize it aside from laser-etching the name of your loved one. Another option is to add a bronze plaque.

Bronze-front niches are also an option, which can replace the practical use of a headstone in traditional burials. It includes much of the same information, too. Names, dates, or a short line can all be included.

Glass-front niches provide the most options for personalization, though. You can display the contents of the niche for anyone who wishes to see it. You can put other things in this little ‘window’ such as photos, flowers, notes, and mementos. This option isn’t as sturdy as the others. As a result, these niches are always inside columbariums, to add additional protection from the elements or passersby.

Columbariums were quite common in the Roman Empire. Columbarium comes from the Latin word columba, meaning ‘dove’ or ‘pigeon.’ Columbariums were originally associated with dovecotes. As they gained popularity in the Roman Empire, the tradition endured and eventually evolved to what we know today. But cremation was common in that time and place, and if you’re not interested in cremation, this may not be the right choice for you.

The Romans asked funeral societies to hold responsibility for columbariums. They built, supervised, and maintained them. Just like today, funeral options were often limited by budget. Because of the rigid social divide in Rome, columbariums at the time were utilized by lower and middle-class people. They started as a different twist on house tombs. Like anything else, columbariums varied greatly. They could be quite simple or elaborate works of art. Today, some columbariums serve as a treasure trove for historians.

Nowadays, columbariums share a lot of similarities and are common structures in cemeteries. They can be made of brick or concrete, and are planned in an open fashion. This lets people walk around and view each niche. These are filled by urns, which hold ashes of cremated loved ones.

Historically, columbariums were gorgeous works of art in some cases, depending on the budget a family had available. Inscriptions, paintings, and mosaics were all included. Columbariums were considered to be social symbols of wealth for the lower and middle class, given the amount of intricate etching and detail involved. An ornate niche probably indicated that the loved one cremated belonged to the middle class, and continues to provide valuable information about social classes in the Roman Empire.

Building columbariums was halted during Hadrian’s rule in AD 117 to 138. It was replaced by traditional burial, a popular option that still captures many people. As a result, cremation didn’t regain popularity until the 1900s.

The purpose of columbariums is to marry two different burial types. What’s the benefit of a traditional burial? It provides a sentimental, public location to house your loved one’s remains.

What’s the benefit of cremation? It’s a space-effective, popular way to process remains after death. Columbariums don’t have the benefits of other burial types, though. A massive columbarium taking up space isn’t particularly friendly to the environment. If that’s a priority for you, then a green burial might be a better option.

It does help the environment more than a traditional burial, as the pounds of wood and synthetic materials dissolving into the soil may be more toxic and dangerous. Columbariums avoid this issue.

What’s the Average Cost of a Columbarium Niche?

When considering the cost of a columbarium, it’s important that you plan ahead. Does your loved one want to be buried alone? If you’re planning for yourself, do you want your spouse to be buried with you? Once the urn is sealed in a niche, it cannot be relocated easily. If you want someone buried next to you, plan ahead to make sure that happens.

The price of a niche jumps when it’s last-minute as well. The costs vary, but estimates are fairly conservative. A single niche might cost about $700 and will fit an urn for one person. The cost of larger niches can cost a few thousand dollars, depending on how many urns you want to include.

Compared to other funeral options, especially, this can be very reasonable. It includes a wide variety of services.

What’s the Difference Between a Columbarium, Mausoleum, or Other Types of Burials?

Mausoleums and columbariums are often confused with each other. Mausoleums are used to house bodies above ground, with no cremation involved. They’re common in places with high sea levels, like Louisiana, preventing unfortunate situations when the water level rises.

Columbariums are used to house urns, which hold cremated remains of loved ones. There’s a difference in cost, though. Cremation is a straightforward process, and depending on your state, it often costs thousands of dollars. After it’s over, though, there’s not much left to do. You can purchase an urn and finish paying your respects. Columbariums involve cremation and the cost of a niche.

Mausoleum burials don’t include the cost of cremation. Depending on the price of a full-body niche, this might be a cheaper option. Locations and indoor versus outdoor columbariums can also make a big difference for your pocketbook.

Check out our list of burial alternatives if you're looking to compare further.

When considering your options, think about what kind of service you want to have. Would you prefer a service based around your urn? Afterward, family members could be responsible for sealing your urn in the columbarium with a private ceremony. If you’d prefer a public one, that can also be arranged.

Think of it as arranging a traditional burial ceremony. Since many columbariums are in a cemetery or graveyard, this should be easy. Planning ahead and considering your priorities is the biggest part of choosing a columbarium for you or your loved one.