Virtually all cultures and societies have an idea or concept for “coming of age.” You’ve likely heard about coming of age ceremonies. Maybe you know that coming of age is a genre of movies and books. Perhaps you’ve heard older generations and members of your family tree reflecting on their own coming of age experiences.

That said, you might still have some questions about the topic. Knowing the idea of coming of age is important to all cultures isn’t the same as knowing why. Maybe you’re not even completely sure you know what coming of age truly means. 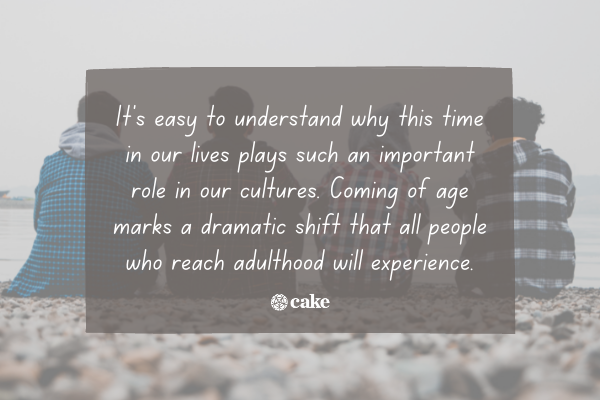 In general, “coming of age” refers to the period in a person’s life when they make the transition from the innocence of childhood to the maturity of adulthood. Keep in mind, the specific time when coming of age occurs can vary from person to person.

Yes, typically, people have this experience during their teenage years. That’s when they finally shed their childhood self and start to become an adult. Additionally, many consider the onset of puberty to correspond with coming of age.

However, some people face unique experiences that force them to come of age earlier than most. For instance, a child might mature at an early age if they grow up in a warzone or similar environment. Also, cultures and religions throughout the world often perform coming of age rituals at specific points in a child’s life.

Coming of age is such a universal human experience that numerous films, stories, and novels depict it. When famous people write autobiographies or memoirs, they often focus on this period of their lives as well. Songs about aging and general books on aging also tend to relate to the subject.

It’s easy to understand why this time in our lives plays such an important role in our cultures. Coming of age marks a dramatic shift that all people who reach adulthood will experience.

After all, childhood is a unique time. It’s the only period of life when most people are truly free of adult responsibilities. It’s a time when we typically don’t grasp the full realities of aging. It’s a time when life may not have exposed us to experiences that will be common later, such as having a job, being in love, or raising children of our own.

That all changes when we become adults. We start to develop romantic and sexual feelings. Our responsibilities become more important. We also may face some of life’s harsh realities, such as death, for the first time.

All these shifts inevitably change who we are. That’s why just about every culture ritualizes and reflects on coming of age, each in its own way.

Coming of Age Ceremonies Around the World

Coming of age ceremonies are often (but not always) religious traditions. According to certain cultures and religions, young people become mature adults at specific points in life. Ceremonies essentially make the change official. The following are just a few noteworthy examples.

Just remember, a ceremony doesn’t need to be religious to serve the same purpose of a coming of age ritual. For example, many people consider a Sweet Sixteen to be a coming of age ceremony. Graduation parties, weddings, a special fishing trip with Dad, and even the process of moving into your first college dorm are all potential examples of non-religious coming of age ceremonies as well.

The bar mitzvah (for boys) and bat mitzvah (for girls) is the traditional Jewish coming of age ceremony. It usually occurs when a child reaches the age of 12 or 13.

At this stage, Jewish people believe the sense and mental maturity of adulthood begins to develop, and Jewish law can hold a child responsible for their actions. Following the religious portion of the ceremony, which typically involves such rituals as reading from the Torah, many bar and bat mitzvahs include a large party similar to a wedding.

In many cases, coming of age traditions don’t involve specific ceremonies. Instead, they involve participating in previously forbidden or “off-limits” experiences and activities.

Consider the example of Rumspringa. When Amish children turn 16, their elders typically loosen the rules, allowing them to engage in activities ranging from driving cars to taking trips (without their elders present, but often other Amish teens) to big cities.

The quinceañera is the coming of age ceremony for young Hispanic girls. Traditionally, it involves a mass, followed by some sort of ritualized ceremony (such as removing flats and putting on heels) to mark the transition from childhood to adulthood.

The quinceañera is also an example that illustrates the way coming of age traditions can develop and change over time, as many families now modify the traditional elements of the ceremony according to their liking. 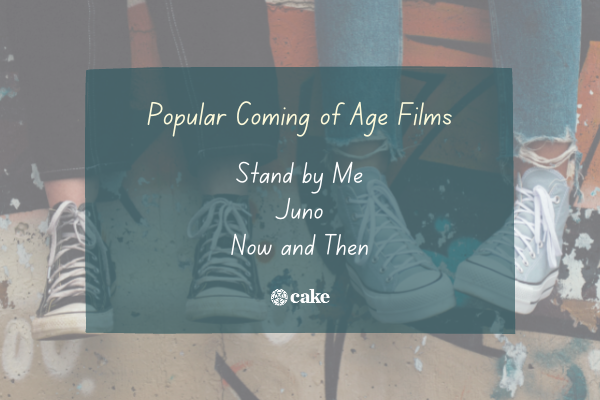 As you become an adult, you experience coming of age. That’s a key reason so many filmmakers depict it. They know audiences will be able to relate, and they know this genre allows them to tell a genuinely emotional story.

Popular coming of age films include (but are certainly not limited to):

The ‘80s had its fair share of movies about young people beginning to become adults. However, few are as widely remembered and celebrated as this classic.

Stand by Me beautifully depicts what happens when young boys, each struggling with their own painful experiences (from the recent death of a sibling to an abusive household), face the reality that their boyhood (and with it, their friendship) can’t and won’t last forever.

Sometimes, we reach adulthood naturally. The process may occur in stages. Sometimes, life experiences force us to mature earlier than we expected. Such is the case in Juno, when an unexpected pregnancy introduces a teenage girl to the life of an adult.

One of the best ways to show the dramatic shift that occurs during the coming of age is to focus on two timelines. Now and Then chronicles the changing lives of four young girls, while also depicting them as adults. The result is a touching exploration of what does (and does not) change when we grow up.

Filmmakers aren’t the only ones telling stories about the process of growing from a child into an adult. Authors have touched on this subject many times as well, in books such as:

The Catcher in the Rye

Coming of age can be painful. Holden Caulfield, the teenage protagonist of this high school English class staple, spends most of the book trying his best to avoid the pain that comes with change. Of course, he’s unable to do so and instead has to accept that coming of age is virtually unavoidable.

The House on Mango Street

Some coming of age novels and films illustrate how specific experiences trigger the onset of maturity. Others explore how the coming of age is often a slow process that occurs over time.

For example, in the semi-autobiographical The House on Mango Street, author Sandra Cisneros shares a series of vignettes about an impoverished young girl growing up in Chicago. Eventually, it becomes clear that these vignettes tell a coming of age story.

Again, coming of age can often involve some degree of pain or tragedy. Difficult life experiences force us to cope with realities that no child can bear without losing some degree of innocence. The Outsiders touches on this, showing how a group of friends develops when one of their own dies.

Any reasonably long life will involve seemingly non-stop change. Coming of age is often the first period in our lives when we truly recognize it.

However, while these changes can be painful, they can also be positive. Yes, growing up may mean losing childhood’s innocence, but it also involves gaining the confidence and richness of life that is only possible in adulthood.