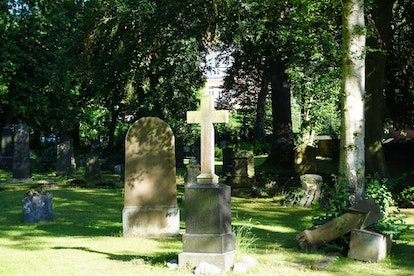 There are so many things to keep in mind when picking out a headstone. You want to pick out building materials and fonts that will suit the taste and personality of the deceased. You need to include accurate biographical information.

People work hard to balance personal preferences in headstones. They want to honor the personal style of the deceased while making sure the headstone feels timeless. This can be a challenge to balance to strike when you’re designing a headstone for one person.

But what happens when you have to consider the styles of two people? Companion headstones memorialize multiple people at once. Below, we delve into the factors that go into designing a companion headstone. We’ll talk about cost, headstone designs, and more.

This is typically done for twins who never married, or for two siblings who died young. Sometimes people can choose to be interred in a single grave plot. Typically, one person will be buried in a coffin. Then when the second person dies, their coffin is buried above the other one in the same plot.

This is often done when space is at a premium in a private or family ceremony. A companion headstone can be placed on a single plot where two people are buried. You can also get double companion headstones that are designed to encompass two side-by-side plots. These serve as a single memorial stone for people who are buried in their own plots next to one another.

» MORE: Lost someone recently? We've been there. Let us guide you.

How Much Does a Companion Headstone Usually Cost?

There are so many factors that come into play when figuring out how much a headstone costs. First, what materials are you choosing to make a headstone?

Granite headstones could be as little as $450, but contrast that with a polished marble headstone that can cost anywhere between $1,500 and $1,800. Larger headstones require more raw materials, and so the cost can go up accordingly. A double companion headstone that encompasses two side-by-side plots can be double the cost of a single grave marker.

You also have to factor in installation. A regular headstone can cost between $150 and $450 to be erected in a graveyard. A bigger structure might need a more secure foundation, like a concrete base. So a double companion headstone could be anywhere from $300 to $600 to install.

As mentioned above, companion headstones can be designed for a single plot or for two plots that are side-by-side. But beyond this, there are other stylistic factors to take into consideration.

Here we explore the general types of headstones that are currently on the market. Any of these types of grave markers can be easily adapted as companion headstones:

When you picture a headstone, you probably envision a slab of marble or granite that stands upright at the head of a grave. This style of headstone is classic. Because of its dimensionality, it is often very visually striking. It is easy to get disoriented in a cemetery. An upright headstone with an original design is easier to see from a distance than other types of headstones.

The cost of an upright headstone costs on average between $1,000 and $3,000. The prices can vary widely because elements like size and the materials used can have a big effect on the cost. An upright companion headstone that fits on a single plot would also fall into this price range. One that’s meant to span to side-by-side plots could nearly double the price.

The base of a wedge companion headstone is often much broader and sturdier than a more typical upright headstone. Then as it rises, it is cut at an angle. That flat angled side is where the deceased’s name and other information are engraved. These headstones are considered very durable. The engraved beveled surface provides the perfect backdrop for a beautiful memorial, too.

Wedge headstones are significantly larger than more standard upright headstones. However, they’re also often made with less expensive materials like granite. A wedge companion headstone could run you anywhere from $2,500 to over $10,000, depending on materials and design.

For many years, plain upright headstones were considered fashionable. Then more ornate religious monuments took their place. In recent years, people have begun pivoting to flat headstones. A flat headstone is what it sounds like--a headstone that lies on the ground atop the head of the grave. It does not stand upright, and thus blends into the landscape.

It’s possible that modern tastes have influenced this style. Budgetary constraints may also come into play with this choice as flat grave markers are the most cost-effective type of grave marker. They can cost anywhere from just $300 to $1,200. You even have some flexibility when it comes to materials. Granite and bronze are both affordable when you stick to the flat companion headstone.

It may be obvious that choosing the type of companion headstone is only one part of the puzzle. Working on a design element to properly lend credence to your loved one’s life can be difficult, but there are a few designs out there that can help inspire you. Check out some of the more popular options below.

Many people are opting to include a picture of the deceased on a headstone. These are often portraits that are engraved in the likeness of the deceased.

Artists often work from photographs of the deceased to create these portraits. Other businesses can create ceramic picture plaques from photos of the deceased that can be affixed to a headstone. Many companion headstones will incorporate a portrait of both people interred in the grave.

If a married couple is buried together, the image chosen might be their wedding portrait. A companion headstone for siblings might feature a childhood photo of the two together. Older photos are often used when one party preceded the other party in death by a substantial amount of time.

We talked earlier about upright headstones. Many people picture those in the traditional shape for a headstone. But headstones can be designed with certain shapes and styles. One popular design for a companion headstone features two overlapping hearts. One heart contains the name and dates of life for one of the people who is buried there.

The other heart contains the name and dates of life for the other person. The space under the hearts might also include something about their relationship or a shared epitaph. For example, artist Man Ray and his wife were buried together, although he died fifteen years before she was. When she finally joined him in death, their grave was updated to read “Together Again”.

When two romantic partners are buried together, they may want to pay special tribute to their relationship.

Many married people incorporate the imagery of two interlocked wedding rings in a companion headstone. It helps signify their commitment and devotion to one another.

If you have two loved ones that were inseparable in life, they may wish to stay together even in death. Romantic couples and sibling pairs alike have often opted to be buried together at the end of their lives. They might share a grave out of consideration for cost or lack of space. If there’s limited space in a family cemetery, for instance, two people might opt to be interred in a single plot. Or a couple might like to be buried in side by side plots so they can be together in death as they were in life.

If you're looking for more help with headstone shopping, read our guide on buying headstones and where to buy headstones online.