Country music is one of the most overtly emotional genres of music. Yes, some country songs like “Save a Horse, Ride a Cowboy” and “She Thinks My Tractor’s Sexy” are more silly than serious. But for every novelty country song, there are a dozen more that explore heartfelt emotion.

There’s a reason why many people choose country songs for funeral playlists. It’s because of the plainspoken emotional heft they have.

Send your end-of-life preferences—including your funeral, legal, medical, and legacy choices—with your loved ones. Create a free Cake profile to get started.

Country Songs About Missing Someone You Love 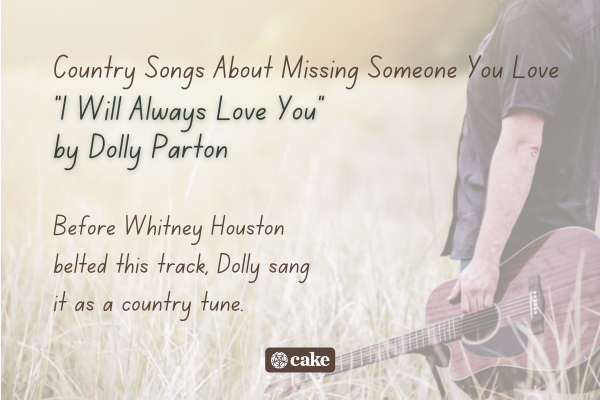 1. "Where Do I Put Her Memory?" by Charley Pride

It’s unclear whether the relationship in this song ended because of a breakup or a death. Either way, it’s a poignant ode to missing the daily presence of someone you once loved.

Allan’s cover of a Vertical Horizon track honors his late wife. It adds poignancy to what could otherwise be a breakup song.

3. "Only a Dream" by Mary Chapin Carpenter

This song is about a young girl watching her older brother flee their unhappy home and leaving her behind. It’s understated and incredibly sad.

4. "Out of the Woods" by Nickel Creek

The ethereal harmonies of this country-folk trio enhance the wistful and abstract lyrics of this song.

In this tearjerker, the narrator drives a truck that belonged to his brother who has died. This is the way he allows himself to miss him and grieve.

6. "Every Light in the House" by Trace Adkins

The narrator in this song promises to leave a light on in case his ex-wife changes her mind and wants to come home. But he misses her so much, he leaves every light on instead.

7. "I Will Always Love You" by Dolly Parton

Before Whitney Houston belted this track, Dolly sang it as a country tune.

The narrator in this song is the one who broke someone’s heart. Years later, he looks back on it with regret.

9. "Paint Me a Birmingham" by Tracy Lawrence

In this throwback country song, the narrator asks an artist to paint him back in his lover’s arm.

10. "I Still Miss Someone" by Johnny Cash

» MORE: A will is not enough. Get all the documents you need.

Country Songs About Missing Someone Far Away 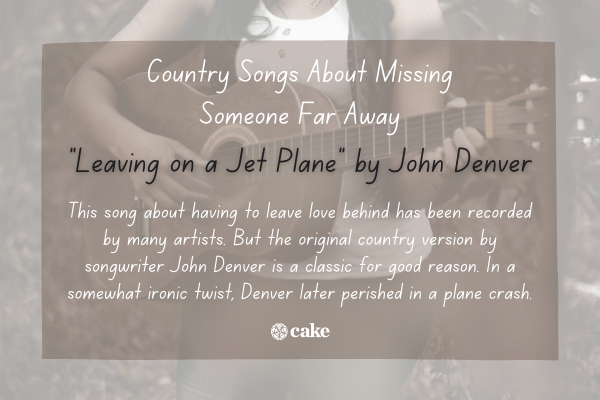 They say absence makes the heart grow fonder. But that doesn’t make a separation any easier to deal with. These songs will help you cope with missing someone you can’t hold close.

11. "The Song Remembers When" by Trisha Yearwood

This tune is all about how you can be separated from someone by time and distance, but still feel connected.

Before she was a pop powerhouse, Swift developed her incisive songwriting abilities in country music. This song tells the story of fragile first love complicated by distance.

13. "Carrying Your Love With Me" by George Strait

In this sweet country classic, Strait croons that no matter how far away he travels, he always brings his partner’s love with him.

Musicians have to spend months on the road away from their loved ones. This song talks about missing home when home is really a person you love.

This song about having to leave love behind has been recorded by many artists. But the original country version by songwriter John Denver is a classic for good reason. In a somewhat ironic twist, Denver later perished in a plane crash.

In this jaunty sixties tune, a young working-class man panning for gold in Alaska longs to return to his love in Saginaw. He is there because the father of the woman he loves will not allow her to marry a poor man.

But in the end, he's vindicated. He tricks her disapproving father into trading places with him and marries his love.

Sometimes we miss people when they’re geographically far away from us. Sometimes though, we miss people from our past. This nostalgic track about a sun-drenched first love falls into the latter category.

In this tear-jerking tune, a father on the road for work talks about missing his family.

19. "Travelin’ Soldier" by The Chicks

This tragic song tells the tale of two teenagers in love. At first, they are only separated by distance but later they become separated by death.

20. "If Hollywood Don’t Need You" by Don Williams

While the narrator of this song wishes his former flame well, he is also somewhat hoping things don’t work out. He says if they decide to come back, he'll be waiting with open arms.

Country Songs About Missing Someone You Shouldn’t 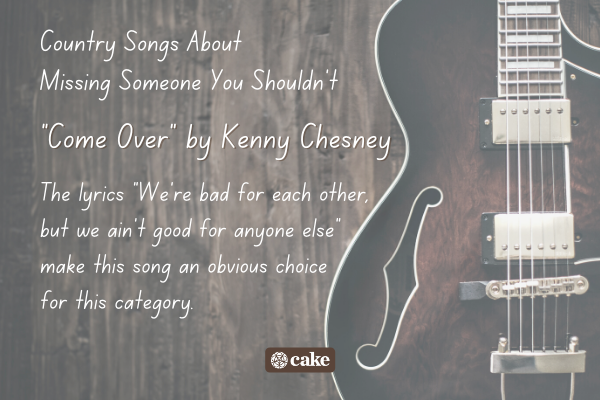 Even if we know someone is bad news, sometimes we can’t help but love them anyway. These country songs can help you get through missing someone you love for all the wrong reasons.

This song is about a woman whose former flame no longer loves her even though she still adores him. He wants to remain friends, but she misses what they once had.

22. "Need You Now" by Lady Antebellum

This song about missing an ex-lover includes the lyrics “Guess I’d rather hurt than feel nothing at all.” Those lyrics perfectly explain you might miss someone you know is terrible for you.

In this song, this singer is preparing to leave a woman who doesn’t love him anymore. It’s a powerful meditation on missing someone who is right beside you.

This thrumming track warns of the peril that comes when you chain yourself to someone who doesn’t love you.

25. "Never Had It So Good" by Mary Chapin Carpenter

This mid-tempo track talks about how hard it is to miss someone who is happier without you.

The woman in this song hasn’t left yet, but the narrator already knows her wandering heart will take her away eventually. Even if he’s with her now, it’s only a matter of time before he’ll miss her again.

The lyrics “We’re bad for each other, but we ain’t good for anyone else” make this song an obvious choice for this category.

This nostalgic track about a teenage love affair. It is another song where the distance is measured in years instead of miles.

In this haunting duet, a man and a woman miss each other so much, they drink themselves to death. It’s the ultimate song about missing someone in ways that are bad for you.

If there’s someone you shouldn’t miss, it’s the guy who leaves his marriage and children for another woman. But love doesn’t always make sense.

Upbeat Country Songs About Missing Someone 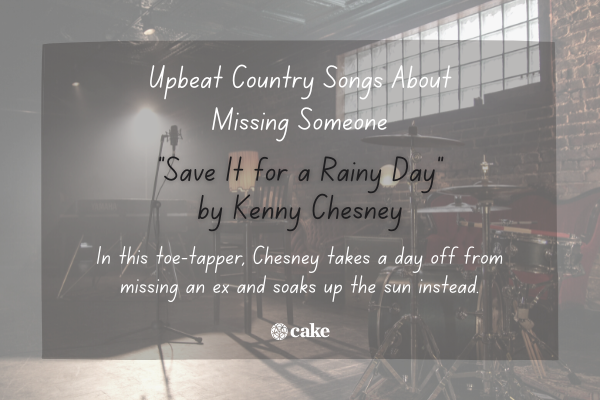 While a lot of people like to cry it out when they miss someone, other people prefer to stay positive. These upbeat country songs will lift your spirits when you’re feeling low.

This bittersweet song tells the tale of an old man who hopes that in death he’ll be reunited with his wife and son. Even though he leaves behind people who miss him, he finds comfort in his belief about what waits for him

32. "Every Time I Hear That Song" by Blake Shelton

This song is about a breakup, but the driving mid-tempo beat and howling chorus bring a sense of optimism.

33. "Too Busy Missing You" by Trent Summar & the New Row Mob

This rollicking, raucous track advances the theory that missing a lost love is a full-time job. It’s a real barn burner of a breakup song.

The fast tempo and witty refrain will get your toe tapping, even as Chambers swears to break her own heart before her lover can.

In this country-pop gem, the narrator books a one-way flight to visit his girl because he doesn’t want to miss her anymore.

In this toe-tapper, Chesney takes a day off from missing an ex and soaks up the sun instead.

37. "I Still Miss You" by Keith Anderson

Even though this song is about a breakup, its upbeat tempo has turned it into a bonafide country anthem.

This song proves that all you need to help you stop missing someone is a couple of friends to pick you up.

Though this song sounds like a breakup ballad, it has an uplifting message. Even knowing the relationship would end, the narrator would gladly do it all over again.

40. "Miss Me More" by Kelsea Ballerini

In this girl-power anthem, the narrator realizes it’s not her ex she misses. Instead, it’s the girl she was before she changed herself for him.

Listening to Remember and Cope

Country music is often about emotional subjects, so it’s the perfect genre when you miss someone. While you can always read books on grief to help you cope with the death of a loved one, songs can help you heal too.