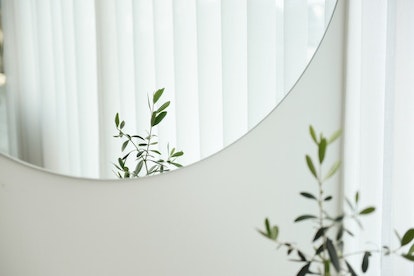 Culture dictates rituals that are present when someone dies. From washing the body and it’s preparation to the final burial—death rituals reconcile our grief. They express our family’s attitudes, our community practices, and respect towards the dead.

Like stopping clocks and putting coins on the eyes of the dead, covering mirrors is a death ritual passed down over centuries by many cultures around the world. In this guide, we’ll explore the interesting origins of covering mirrors and their meaning.

What’s the Significance of Covering Mirrors After Death?

The importance of reflections dates back to ancient Greek and Roman times. Mirrors as symbols of death and superstition have their origins here. The first mirrors were pools of water or streams where the ancient Greeks and Romans told the future. Later, they created small, heavy hand-held mirrors from copper or bronze.

The Romans believed every person goes through seven-year soul cycles. Broken mirrors would bring bad luck to the physical being and the soul. Beliefs about mirrors as soul portals persisted through medieval times and into today.

As beliefs in superstitions spread from the Romans to other parts of Europe, deep beliefs about the meanings of mirrors did as well. The modern mirrors found today originated from Germany in 1835. Alongside reflections becoming clearer, fear of souls lingering in mirrors did, too.

Many folk communities believed that ghosts could carry away souls through mirrors never to rest. Others believed the deceased could harm the living by entering the physical world through a mirror.

As folk beliefs spread, covering mirrors after death became a cornerstone of Jewish tradition. According to the Talmud, a Jewish religious text, the shadim or soul can enter through reflective surfaces.

The earliest mentions of covering mirrors come from European countries like Romania and Hungary. Today, it’s a customary way to honor loved ones after they die.

Covering Mirrors After Death in Different Cultures and Religions

Judaism may have spread the belief in covering mirrors, but today it’s a practice that’s commonplace all over the world. Views around the world might be different, but covering mirrors is a common thread.

It ties together religions and countries that don’t have anything in common on the surface. Let’s explore how this simple custom makes a significant difference in mourning the dead.

The custom of covering mirrors is especially common among Irish Catholics. The Irish wake is a well-known funeral tradition where the family of the deceased covers all mirrors in the home. To hide the physical body from the soul, the family turns mirrors to face the wall.

Some Irish superstitions say that if you look in a mirror long enough, you’ll see a devil looking over your shoulder. Others believe that the mirror traps the soul of the deceased.

The practice extends to other Catholic countries. Polish Catholics cover mirrors so the soul isn’t trapped. There are other occasions like All Saint’s Day when covering mirrors is essential. On All Saint’s Day, the boundary between the living and dead thins and spirits can pass through mirrors.

Russian Orthodox Christians, the majority in Russia, have strong superstitions, too. Before a Russian Funeral, the family prepares the home for mourning. They cover mirrors with black material to ease the deceased’s journey into the afterlife.

The most notable moment in covering mirrors was president Abraham Lincoln’s funeral. His body was laid to rest at the White House, and all mirrors were draped with black fabric. Covering mirrors is a ritual that extends across many religions and cultures.

As mentioned before, covering mirrors is an essential Jewish custom. The sitting shiva is a week-long mourning period. It begins with covering all reflective objects in the house like mirrors and televisions. Not only does this encourage inner stillness to meditate on the deceased, but it’s a sign that all intimate relations in the home should halt.

Instead of mirrors, the ancient Talmud texts mentioned beds.

According to the Babylonian Talmud, the text that covers law and tradition, the bed was the most important part of the home. The bed creates life, so when death happens, it must be overturned to show the end of life. For this reason, people began to reverse mirrors. Today, they cover them completely during the sitting shiva.

While some funeral customs differ among Asian countries, respect is essential for all funerals.

Most people in Asia follow specific funeral arrangements, or they risk bad luck. Covering objects in the home is especially important to honor the deceased’s spirit.

Sri Lankan Buddhists take special measures to take care of the deceased. They overturn any object where the spirit might see their reflection like mirrors or pictures. Some Buddhists believe that the spirit becomes confused after seeing its reflection. When confused, it won’t want to pass into their next life.

In China, funerals are so important that families often tumble into debt over high funeral costs. The family’s honor is especially important.

The Chinese cover mirrors to protect their loved ones. They believe if a person sees the coffin’s reflection, there will be additional death in the family. They are profoundly superstitious and follow other customs like spreading rice around the home to lead hungry ghosts astray.

Expressions of grief are common when a Muslim dies. From washing the body to clothing, Muslims meticulously plan funeral customs so the deceased can pass into the after-life.

Instead of superstition, like in Asian countries, Muslims cover mirrors to be present in the funeral ritual. Looking at reflection during prayer is vain and taboo.

Death was openly accepted and even fashionable in the Victorian Era. It was Queen Victoria, the ruling monarch, who set the tone for long mourning. She mourned her husband and wore black for 40 years.

The mortality rate was high in the Victorian-era. This was a time where baby bottles were called “murder bottles” because they were so difficult to clean. It was common for people to preserve the dead. Post-mortem photography was a trend and family members wore the deceased’s hair or possessions.

Most importantly, funeral rites had to be observed or the dead couldn’t transition into the next world.

Before a Victorian funeral, time stopped—literally. Family members prepared the house for death by stopping clocks and covering windows. Of course, mirrors were covered. This was to prevent the deceased’s spirit from being trapped.

Like the cultures mentioned above, some people thought that looking into a mirror could lead to their death. Other traditions carried over to the Victorian era, possibly from the Romans. People believed that a broken mirror led to bad luck for seven years.

Popular culture strengthens the prevalence of mirrors in death traditions around the world.

“Magic mirror in my hand, who is the fairest in the land?” You’re probably familiar with this quote from Snow White. Mirrors are associated with magic. It comes from the time ancient Greeks used them to tell the future.

Even Kings and Queens were fond of mirrors. Queen Elizabeth’s magician and alchemist was famous for scrying, or telling the future from mirrors. Later, witches used mirrors as tools for performing spells. Mirrors hold strong superstitions that survived into modern times.

Step Into Your Ritual

Why do we give mirrors magic powers? How is it that these shiny pieces of glass have fascinated culture around the world? When you break a mirror, it makes you shudder. Maybe the explanation is simple. Or perhaps mirrors are truly a portal into another dimension. In any case, covering them is a symbol of mourning that unites cultures around the world.

What are your mourning symbols? You can use our free tools and resources to begin exploring. Mirrors remind us of our mortality. Maybe you believe the dead leave souls behind, or you aren’t rooted in any beliefs. Either way, end-of-life planning is an essential step to living a meaningful life.