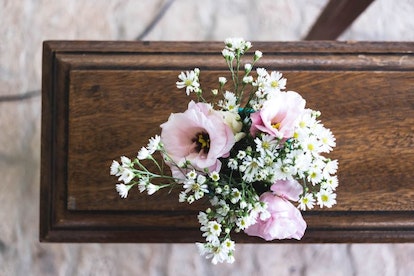 If you’re familiar with internet culture and memes, there’s a good chance you’ve spotted the Coffin Dancers once or twice. The Dancing Pallbearers have gained official meme-status as the internet embodiment of schadenfreude (feeling joy at the expense of others).

Countless videos of unfortunate souls crashing their bikes, falling off roofs, and dying in videogames come paired with the famous troupe, dancing along with a casket in-tow.

But the Dancing Pallbearers also represent more than a meme: they’re part of the funeral culture of Ghana. And they lend their services, both in-person and online, to helping people cope with grief and even raising awareness for public health.

Who Are the Dancing Pallbearers?

Nana Otafrija Pallbearing Services is a troupe of pallbearer-dancers out of Prampram, Ghana. The leader of the group, Benjamin Aidoo, reportedly started the group as a way to bring in some extra cash in 2007.

Aidoo said he founded a normal pallbearer business to pay his way through school. Little did he know, the creativity he and his crew brought to the business would make for much more than a side-hustle.

What Are the Dancing Pallbearers Known For?

At times, the troupe carries the coffin on their shoulders while performing a relatively simple jig. At others, the group drops down onto all fours and crawls, carrying the coffin and dancing all the while. You can sometimes spot the crew lying down completely under the casket, hopping along the ground on their backs.

Not only are the dancing pallbearers impressive to watch in person, but they’ve also gained a huge following online.

The Dancing Pallbearers as an internet sensation first rose to prominence in 2017. BBC News Africa reported on the group and posted a short video online.

The group achieved even greater meme status in 2020. On YouTube, TikTok, Twitter, and across the internet, users paired clips of the Dancing Pallbearers with snippets of people suffering various mishaps.

In one example, two misguided kids drive their dirt bikes on a crash-course straight into one another. That’s followed up with a clip of the Coffin Dancers, performing their best coffin-dance.

The “Coffin Dance Meme” is usually paired with the EDM song, “Astronomia” by Vicetone and Tony Igy. The track released all the way back in 2010. By 2020, it’s primarily known as “the Coffin Dance Song.”

The Coffin Dancers are an internet sensation, but they started out lifting up spirits in person. If you enjoy learning about death in different cultures, you might know that Ghana is famous for its unique funerals.

Ghanaians often spend weeks or months preparing for a funeral, and they typically want the ceremony to be as lavish as possible. The more deluxe the funeral and procession is, the more honor you show to the departed.

While dancing at a funeral might be frowned upon in many societies around the world, it’s nothing outlandish in Ghana. If you can afford the Dancing Pallbearers, the performance is just one more way you can show your love for your deceased loved one.

The main service the Coffin Dancers provide is, of course, pallbearing with style. That means performing various dance moves while carrying the coffin in the procession. But it also includes dressing up in elaborate pallbearer styles.

Benjamin Aidoo, the group’s leader, even stated that different outfits warrant different fees. If you want the group to wear an elaborate get-up when they provide their services, it’s going to cost more. And once you see one of their videos, it’s easy to understand why. While performing their Dancing Pallbearer services, the members of the troupe often kneel, or even lie down, on the ground. Their clothes likely need an intensive dry-cleaning, if not to be tossed out completely.

The Ghanaian coffin dancing troupe gained a new level of fame during the COVID-19 pandemic.

Social media accounts from every corner of the world started posting their videos anew. And the dancers themselves came out with a message spreading awareness of “stay-at-home” orders.

Benjamin Aidoo, one of the troupe’s leaders, posted the short video to his Twitter page. He captioned the video with, “Thanks to all the doctors in the world.”

In a lighthearted yet serious clip, the dancers can be seen wearing medical masks in the style so well-known by mid-2020. They thank medical workers around the world with a round of applause.

Then, the lead-pallbearer at the forefront of the video tells the public, “Stay home or dance with us.” The video wraps up with a menacing chuckle.

The post received enormous praise on Twitter. It helped reinforce the seriousness of stay-home orders while adding a touch of levity at the same time.

The Dancing Pallbearers or Coffin Dancers transcended internet success in 2020 when they earned a spot on a billboard in Brazil.

Their line, “Stay home or dance with us,” was considered so helpful to the social-distancing campaign that Brazil decided to run with it.

And their faces have been spotted in public elsewhere, trying to contain the spread of the COVID-19 virus. The Dancing Pallbearers can be seen on cars, along with the statement, “Stay home. Stop COVID-19.”

The Coffin Dancers haven’t met with only praise as they’ve risen to internet fame. Some people who have seen the various memes haven’t been entertained. They’ve come out to complain that death is a serious matter and shouldn’t be treated with such a lighthearted tone.

But something in the Dancing Pallbearers’ methods might lend them more leniency with internet critics. After the pallbearers went viral for the first time in 2017, and again in 2020, some tried to follow in their footsteps. But for whatever reason, the public wasn’t as happy with others taking on the “dancing pallbearer” role.

A primary example is when NHS workers uploaded a TikTok video during the COVID-19 crisis in 2020. In the short video, the medical workers danced around an ambulance, toting a CPR dummy on a stretcher.

Although they tried to label the video as a morale-booster, it generally didn’t go over well with a public struggling through a pandemic.

Life After the Meme

The BBC reporter who first featured the Dancing Pallbearers in his report in 2017 returned to interview Benjamin Aidoo in 2020.

According to Aidoo, becoming a meme has been a net positive. He stated to BBC that he’s “gained personality,” and that he receives many calls for interviews.

But the COVID-19 pandemic that brought them such publicity in 2020 also brought the Dancing Pallbearer business to a standstill. Aidoo told BBC that he hopes to get back to business as soon as the crisis comes to an end.

It makes sense the dancing pallbearer troupe hails from the West African nation of Ghana. After all, Ghana is famous for elaborate and colorful funerals. Families in Ghana commonly spend more time and money on a funeral than they do a wedding.

The more unique the funeral procession and ceremony, the better. Although funeral attendees traditionally wear black and white, important community members and family might wear more ornate and colorful garb.

And if you want dancing pallbearers at your funeral, you’re in luck: the Prampram troupe plans to travel the world, teaching others their craft as soon as they can.