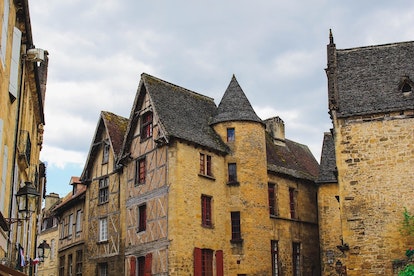 Death has long been one of the most common themes and visuals in art, drama, poetry, and music. The Danse Macabre, or dance of death, is a medieval concept about the power of death as an equalizer. No matter who you are or where you come from, death finds us all. The term has a death positive tone. It’s not intended to evoke fear or worry. It’s a simple reminder that dance is always lurking near.

It’s not always easy to learn how to accept death. By understanding the rich history and tradition of danse macabre, it’s easy to see how people in years past made the most of the limited time they had.

You’ve likely spotted danse macabre in popular culture, though you might not have noticed it at the time. In this guide, we’ll delve deeper into the “dance of death” to explore its meaning and history.

Technically speaking, danse macabre is an artistic motif. It’s a concept present in a variety of art, including poetry, music, drama, and visual arts. It’s a literary representation of a procession or dance featuring both living and dead individuals.

This French word has origins back to the late 13th or early 14th century. It was first noted in early poems that featured themes of the inevitability of death. Throughout the Middle Ages, this term gained popularity and use.

The earliest examples of the dance of death were in a series of paintings in the Cimetiere des Innocents in Paris. In this painting series, the hierarchy of both church and state played out in a stately dance. Skeletons led the living towards their graves.

Throughout history, different artists have played with this term to mean many different things relating to the inevitability of death.

History of Danse Macabre and the Dance of the Dead

Humans have always held a fascination for death. Since ancient times, death in different cultures developed to mean many different things. From Roman generals reminding themselves that they too will die to Ancient Egyptians going to great lengths to preserve their dead in larger than life tombs, symbols of death a large part of human history.

The danse macabre is no exception. Since its earliest days, this iconic dance made its mark on all mortals. This motif is a challenge to all of humanity to confront the ever-present prospect of mortality.

Where did this visual come from? During the Middle Ages, death was much closer than it is today. The average person didn’t live through their 30s. War, poor nutrition, and disease were everywhere. There were several deadly events in this time that resulted in a newfound obsession with the role of death.

The first event was the Black Death. This pandemic plague absolutely devastated Europe between 1347 and 1352. Over 25 million people died during this epidemic. Of those who caught the disease, only one-third survived. It took hundreds of years for the population of Europe to recover from the Black Death. With statistics like that, it’s no wonder more people started to feel their relationship with death shift.

Another devastating event in the Middle Ages was the Hundred Years’ War between 1337 and 1453. France and England fought endlessly over the right to rule the Kingdom of France, drawing allies from across the continent. There’s no way to know exactly how many people died in the Hundred Years’ War, however, the number is likely in the millions.

With these events bringing death to daily life in the Middle Ages, it’s no wonder that these symbols of death became so common. The danse macabre, in a sense, is a way to normalize and rationalize the short-lived nature of the Middle Ages.

Paris Cemetery of the Holy Innocents

As mentioned above, the first visual example of the Dance of Death comes from a painting in an arcade of Paris’ Cemetery of the Holy Innocents. The painting is stretched against the wall so it’s visible from the courtyard of the cemetery. The image had human men accompanied by skeletons in a long procession.

Below each painted man is a verse explaining the person’s station in life. Everyone is arranged in order of social status from Pope to emperor to farmer. The clothing each person wore identified each person and his station. Unlike today’s cemeteries, this Paris cemetery was a public spaced used by a variety of visitors.

That means everyone would have caught sight of the dance of death, a reminder of their own doom. Since this painting was so popular, more artists chose to replicate this style in their own work.

Danse Macabre in Literature and Art

There are a number of popular examples of the Danse Macabre in literature and art that you’ve likely noticed already. From cartoons to nonfiction, these reminders of death are all around us.

Since the dance’s beginning in the Middle Ages, it’s come a long way. This form of memento mori (or reminder of your own death) isn’t meant to scare you. Rather, it’s an encouragement to live life to its fullest.

Hundreds of years after the Paris cemetery artwork that launched this symbol, Walt Disney himself created his own adaptation of the Danse Macabre. In his short film, “The Skeleton Dance,” skeletons rise from their graves and dance around. Their own bones often make up the instruments playing their dancing tunes, this scene could fit right into one of the Middle Ages artworks.

The American tradition of Halloween borrowed greatly from the tone of danse macabre. Just about every classic Halloween film has elements of skeletons, graveyards, and “spooky” imagery. The enthusiasm and excitement around Halloween and scary movies in modern culture highlight the openness many people feel about death.

There’s a reason Stephen King titled his nonfiction book all about the horror genre Danse Macabre. Poets and long-form writers dabbled with skeletal and death themes since the dawn of time.

Gaiman’s children’s book isn’t the only popular literature today that references the macabre. One of the most popular book series of all time, Harry Potter by J. K. Rowling, is heavy with this type of imagery. From the Deathly Hallows to Voldemort himself, Rowling isn’t afraid to have her characters confront death on a personal level.

Humans have been drawn to stories about death and loss for generations. Literature is a way to explore these themes in a safe space. Just like seeing a painting of humans and skeletons dancing the night away, stories are a safe, gentle way to recognize one’s own mortality.

Unlike the Middle Ages, death isn’t as close to us nowadays. Most people only come face-to-face with death once or twice, perhaps at a family funeral behind a closed casket. Yet, as death feels farther away, danse macabre continues to be a popular theme in modern pop culture and art.

If there’s one thing we can learn from danse macabre, it’s that it’s never too early to think about your own end-of-life planning. If the happy expressions on the dancing skeleton faces tell you anything, it’s that death planning doesn’t have to be complicated. As Stephen King wrote in Danse Macabre, “We need ghost stories because we, in fact, are the ghosts.”