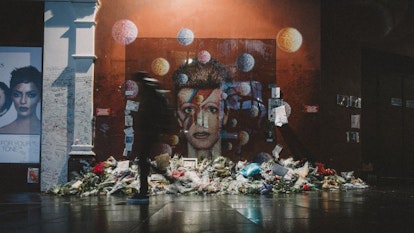 The legendary musician, David Bowie, is one of the most influential singer-songwriters of the 20th century. His innovative career, particularly during the 1970s, had a major impact on pop music and culture worldwide.

Born in 1947, Bowie battled liver cancer for over a year before passing away in 2016. The date of his death was just two days after his 69th birthday and the release of a new album entitled Blackstar.

Bowie didn’t make the news of his diagnosis known to the public. But he did make clear to family and friends what he wanted to happen to his body. He let his loved ones, including his wife, Iman, know that he didn’t want a traditional funeral.

David Bowie reportedly decided on direct cremation all the way back in 2004. More than 12 years before his death, David Bowie wrote out his will, detailing his burial wishes.

David Bowie had what headlines called a “secret” cremation, without friends or family present. (Having no loved ones present is typical of direct cremation.)

By the time news agencies and reporters found out about Bowie’s cremation, it had already happened, which some fans found off-putting. But others speculated that Bowie wanted his cremation kept private.

Direct cremation is a low-cost alternative to traditional final disposition options like burial. It’s lower price tag is a deciding factor for many families who can’t afford to bury their departed loved ones.

But the cost isn’t the only upside to direct cremation. In fact, anecdotal reports from a British insurance agency, Royal London, indicate that direct cremation is more common in higher socioeconomic groups.

David Bowie likely chose direct cremation as a way to keep his final disposition low-key. Bowie reportedly wanted his loved ones and friends to focus on the positive and celebrate his life, rather than mourn his passing. Direct cremation allows family members to do just that, in many cases, by letting them skip funeral services.

By having his body cremated before the public could focus on his death and his remains, David Bowie gave his close family and friends some room to breathe. He also gave loving fans the opportunity to grieve quickly and immediately, without waiting for a formal affair.

In his will, Bowie said that he wanted his body shipped to Bali (if possible) for cremation. He stated that this was, “in accordance with the Buddhist rituals of Bali.” Bowie might have been referring, in part, to the Hindu tradition of cremation (over 80% of Bali practices Hinduism, while only about 0.5% are Buddhist).

His death certificate indicates that it was impossible to ship his body to Bali: Bowie was cremated in New Jersey on January 12, 2016.

Where are David Bowie’s Ashes Scattered?

In the event that his body couldn’t be shipped to Bali for cremation, Bowie stated that his ashes should be scattered there anyway.

According to the New York Times, Bowie vacationed in Bali with Iggy Pop in the 1980s. The idyllic island location made such a lasting impression on him that he chose it as his final resting place.

Bowie was so taken with Bali that he even built an Indonesian-themed home on the Caribbean island of Mustique. In 1992, Bowie told Architectural Digest that he designed the refuge as, “something as unlike the Caribbean as possible because it’s a fantasy island, Mustique.”

Bowie later sold his Bali-themed Caribbean home in the late 1980s. The seven-bedroom Mandalay Villa is now available to rent for just $6,000 to $14,000 per day, depending on the time of year. It features a full, nine-person staff, including two gardeners, a butler, and a chef.

Although David Bowie opted out of a traditional funeral, he did specify that he wanted his ashes scattered in Bali.

The traditional method of final disposition in Balinese culture is a cremation ceremony called the Ngaben. A Ngaben is a Hindu funeral rite that has takes some influence from Buddhism--the religion Bowie practiced. Since Bowie stated that he wanted to be cremated in Bali in accordance with the island’s local customs, he may have been referring to the ceremony of Ngaben.

But Bowie’s body could not be transported to Bali for cremation, so his family simply scattered his ashes on the picturesque island. His family reportedly had a small Buddhist ceremony before scattering the ashes.

Despite some eye-catching headlines that popped up after the news of his cremation, Bowie did not have a portion of his ashes scattered at the Burning Man Festival in Nevada.

He wanted an alternative ceremony

Even though he knew he might not be cremated in Bali, he still wanted to follow the local customs as much as possible. And that means forgoing traditional (western) funeral customs like embalming and holding a service.

He wanted people to celebrate his life

It’s also likely that Bowie wanted his loved ones and his fans to celebrate his life, rather than mourn his death. A traditional western funeral focuses on mourning, with attendees dressed in black and eulogizers sharing heartfelt memories.

But Bowie was someone who inspired creativity and joy with his music and his presence. He might not have wanted to go out on a mournful note.

Another reason David Bowie might have preferred direct cremation over a funeral is that it lets people mourn in their own way. And people all around the world took full advantage of that opportunity.

Bowie left a lasting mark on his family, friends, and loved ones. But even people who didn’t know David personally felt a deep sense of loss following his death. To cope, Bowie fans created memorials and tributes in cities everywhere, including:

David Bowie even got a tribute in space when a Belgian music station and the MIRA Public Observatory gave him his own constellation (roughly shaped like the iconic Bowie lightning bolt) in the vicinity of Mars.

People around the world might opt for direct cremation as a low-cost alternative to burial. But many families and individuals still face a social stigma associated with forgoing a formal funeral. For many of those people, David Bowie’s decision might have freed them up to choose direct cremation themselves.

It may have also demonstrated that direct cremation can free up family members to grieve in their time, in their own ways. For example, the funds that would have gone towards a lavish funeral for David Bowie paid for a laid-back Bali vacation in true Bowie style. Rather than sticking steadfastly to the traditional, Bowie’s loved ones were able to honor him in the way he wanted.