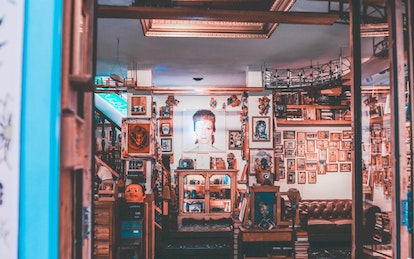 David Bowie was an English singer-songwriter whose music affected people across the entire globe. As one of the world’s best-selling musicians, his work went down in history as some of the most powerful songs across genres.

With such an influential life and career, it’s no wonder Bowie’s songs are so popular as funeral songs. Whether you’re beginning your own end-of-life planning or preparing for the funeral of a loved one, you can’t go wrong by choosing a Bowie song.

To guide your search, we’ve compiled 25 of the best David Bowie funeral songs. No matter the mood or feeling you’re trying to evoke, Bowie’s melodies are here to help.

Virtual funeral tip: If you host a virtual funeral using a service like GatheringUs, you can still play songs for your online guests. Coordinate with your event planner and ensure you have the right digital file types, microphones, and speakers for a smooth experience.

Memorial services are often somber occasions to remember our loved one who passed on. Bowie’s somber songs make sense of these emotions, bring peace, and offer solace in times of need.

This song tells the story of a man who lost sight of himself and struggled with his identity. The lyrics represent a figurative crossroads, not unlike facing the death of a loved one.

“Seven” is one of Bowie’s more somber numbers. He mourns a “city full of flowers, a city full of rain.” Yet, he’s finally free of all his worries.

3. “Ashes to Ashes” from Scary Monsters

In “Ashes to Ashes,” Bowie tells the story of a fictional astronaut who is now in space. The astronaut tells ground control he’s happy at last. This message is one of comfort and peace.

This song is an ode to a woman from Bowie’s past. He remembers her as she was in her 20s, and how “she’ll come, she’ll go, she’ll lay belief on you.” The memory of her is so overpowering that she lives through him as more than a memory.

“Lazarus” was the last single released during Bowie’s lifetime. It’s a haunting tune that looks back on his long life of success. He sings, “Look up here, I’m in heaven, I’ve got scars that can’t be seen.”

This reflective track is a eulogy to the past. Bowie links the past to the future, hinting at previous songs with his lyrics. This ballad asks a bigger question than simply “Where are we now?” It encourages listeners to look inward to find what they’re looking for.

7. “Strangers When We Meet” from The Buddha of Suburbia

This song paints a story of two strangers meeting and spending the night together. Bowie implies things are much simpler when you’re strangers, and life only become more complicated over time.

8. “Rock n Roll Suicide” from The Rise and Fall of Ziggy Stardust

“Rock n Roll Suicide” is the conclusion of the Ziggy Stardust story, and it reminds us that life is limited and fleeting. Either way, Bowie will “help you with the pain, you’re not alone.”

9. “Five Years” from The Rise and Fall of Ziggy Stardust

“Five Years” begins the narration of the fictional Ziggy Stardust story. The narrator announces that the world will end in five years time. Out of this despair comes the calls to do more. What will you do with the time you have left?

10. “Wild is the Wind” from Station to Station

“For my love is like the wind, and wild is the wind,” sings Bowie. This love song is about wanting one last touch with a lost lover. Unfortunately, love is unpredictable and often takes things from us too soon.

Though from an unreleased album, “Your Turn to Drive” is about a daughter stepping out on her own for the first time. She’s had help for so long, and now it’s up to her to make decisions for herself.

12. “The Stars Are Out Tonight” from The Next Day

This song celebrates eternal celebrity, reminding us that those we idolize never really leave us. “The stars are never sleeping, dead ones and the living.” These words bring comfort.

Have a song that you want people to hear at your funeral?

Start planning
» MORE: How do you host a virtual or hybrid funeral? Start here

When it comes to what to expect at a funeral, there’s no one way to feel. Sometimes you need an uplifting song to remind you that life goes on or to evoke the memory of your loved one. You can check out our picks for the best uplifting songs for a funeral.

“Heroes” might not have been a huge hit in the UK or the US after its initial release in 1977, but it’s certainly one of Bowie’s most memorable songs today.

Inspired by the sight of Bowie’s producer embracing his lover by the Berlin Wall, this is a song about lovers surviving through the good and the bad.

The Ziggy Stardust album follows the story of Ziggy. In “Starman,” a radio broadcast tells listeners that the end of the world might only be 5 years away, but salvation is waiting in the sky.

One of Bowie’s most covered songs, “Rebel Rebel” is perfect for any rock-and-roller. The song itself tells the story of a man who rebels against his family by wearing makeup and women’s clothes, hinting at the glam music scene in the 1970s.

“Modern Love” is a song about how the things we love change over time. The call-and-response vocal arrangement urges action, bringing the audience up with him in his fight for happiness.

“Changes” is an anthem for stepping out of your comfort zone and being unapologetically who you are. For a memorial service, “Changes” reveals not only how “time may change me,” but also how we can stand strong in the face of adversity.

Another rock-and-roll favorite is “Diamond Dogs.” All about the coolest guy who is always looking for the next party, this is an exciting song for the young at heart.

19. “The Width of a Circle” from The Man Who Sold the World

This song is half rock-and-roll and half heavy metal. Though quieter in nature, it builds to a crescendo, highlighting the story of a narrator who encounters a supernatural being. This is a love song to rock-and-roll for true rock fans.

20. “Golden Years” from Station to Station

With a not-so-subtle nod to the funk music of the 70s, Bowie’s “Golden Years” urges the narrator to take advantage of the time they have. He sings, “Never look back, walk tall, act fine” because he’ll be with the listener for their “golden years” and beyond.

The fictional Ziggy grows too conceited, so his band (“The Spiders From Mars”) plans to get revenge on him. “Ziggy Stardust” is a silly song that leans into theatrics and storytelling, a gentle reminder not to take life too seriously.

This song about winning reminds us that life isn’t so complicated after all. “All you’ve got to do is win,” so now it’s up to you to just go do it. What are you waiting for?

“She’s Got Medals” jokes about a woman who poses as a man to join the army during the war. This song is a reminder that everyone has hidden secrets and histories.

24. “Under Pressure” from Hot Spice

David Bowie famously appeared as a guest artist on Queen’s “Under Pressure.” Despite the song’s title, this song provides relief with an upbeat melody and memorable lyrics.

25. “Dancing in the Street” for Live Aid

Originally sung by Martha and the Vandellas, “Dancing in the Street” is one of Bowie’s best-known covers. Covered with Mick Jagger, this song brings people together.

Bowie’s music left a lasting impression on many. His music tackles larger than life themes, from space travel to life after death. Because of this, his songs are a popular choice for funerals, memorials, and any celebration of life.

Whether Bowie is one of your favorite artists or a favorite of your loved one, you can’t go wrong with any of the song choices above. From his biggest hits to hidden tracks, he has something for everyone.

If you're looking for more, you can check out our picks for the best rock songs for a funeral.