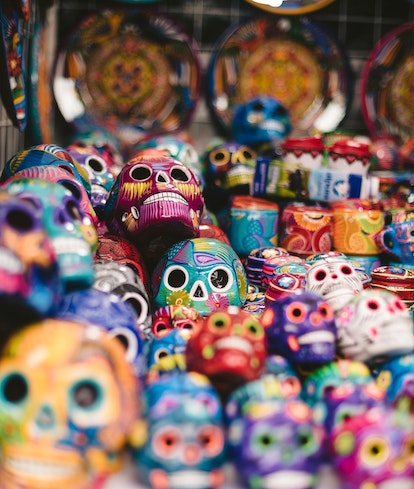 Death is an inevitable part of life. That’s why every single culture around the world has certain unique traditions connected to death.

For example, in Mexico and parts of Central and South America, many celebrate Día de los Muertos, or Day of the Dead. This holiday, in fact, tends to span two days. On November 1, participants traditionally honor dead children, dedicating November 2 to deceased adults.

Despite their subject matter, Day of the Dead celebrations hardly appear somber and sad. They’re actually festive occasions. People who take part in them aren’t mourning the dead, so much as they are celebrating their lives.

One way they do so is with a Day of the Dead altar, also known as an ofrenda. These colorful shrines feature such items as:

It’s important to note that specific details of Day of the Dead traditions can vary depending on what region of Mexico you are in. Although many Day of the Dead altars feature the items on this list, certain items may be more common in certain regions.

That said, no matter where you are, Day of the Dead shrines tend to include decorative skulls, or sugar skulls. Their designers use such materials as granulated sugar, meringue powder, and water when molding them. Once they’ve completed sculpting, they traditionally paint them in bright colors.

Most Day of the Dead altars include skulls because people make offerings to the deceased at these shrines. The skulls symbolize the people to whom they are making offerings.

» MORE: Lost someone recently? We've been there. Let us guide you.

Don’t make the mistake of thinking everything you’ll find on a Day of the Dead altar is inedible! On the contrary, food often plays a major role in Day of the Dead shrines.

This is because tradition holds that the souls of the deceased will return on the Day of the Dead to collect their offerings.

Tradition also states that these souls may be hungry and thirsty. That’s why many Day of the Dead altars include Pan de Muerto, or Bread of the Dead. This sweet treat’s shape typically resembles a skull and crossbones. Altars may also feature water and salt, as well as specific foods that a dead person enjoyed when they were alive.

You might have noticed that the materials used to make Day of the Dead skulls are also technically edible. While this is true, most skulls are decorative, although some people also make special sugar skulls you are meant to eat.

Day of the Dead altars are unique shrines. Certain items, such as skulls, are part of them when they’re first designed. However, as people add more offerings, they continue to develop and grow.

For example, many people place photos of dead loved ones on Day of the Dead shrines. They might also place possessions that were important to them in life.

This highlights a pretty interesting point. Even if you don’t celebrate Day of the Dead, you’ll come to realize that the way various cultures honor the dead can overlap with each other in many instances.

For example, plenty of people in the U.S. visit the graves of deceased loved ones to leave pictures and possessions. This is clearly very similar to making such offerings at Day of the Dead altars.

Again, according to tradition, the souls of the departed return to Day of the Dead altars. That said, sometimes they need a little help. That’s where marigolds come in.

People don’t merely add marigolds (also referred to as Flor de Muerto, or Flowers of the Dead in Spanish and Cempazuchitl in the native language of Nahuatl) to these shrines because they are pretty. Traditionally, they believe that the unique scent and bright color of marigolds help to draw dead souls closer to an altar.

In fact, many shrines also feature trails of marigold leaves leading up to them. This symbolizes a path a soul can follow on its way there.

Along with large decorative skulls, Day of the Dead altars also commonly include smaller skeleton figurines. These may be toys or puppets. Sometimes they are even edible, adding more for people’s ancestors to enjoy.

Including skull figurines on a Day of the Dead altar makes sense for obvious reasons. However, it’s important to understand that these figurines differ from those you might associate with Halloween or similar celebrations.

These skeletons aren’t dancing around cemeteries like cartoon ghouls. They aren’t wearing Grim Reaper robes. Those who craft them don’t even necessarily try to make them look particularly frightening or threatening, like some might expect based on their experiences with skeleton iconography in other cultures.

Instead, the skeleton figurines you’ll find on Day of the Dead altars tend to be dressed like normal people ready to perform normal, everyday activities. These may include dancing, playing music, or simply eating. Some skeleton figurines also depict people experiencing major life moments, such as getting married.

This once again relates directly to the Day of the Dead’s essence. By showing skeletons dressing and behaving like normal people, Day of the Dead altars remind the living that death is always with us, and always will be.

Look closely at a Day of the Dead altar, and you might spot monarch butterflies. (They’ll usually be dead, of course).

Monarch butterflies migrate to Mexico every year. Their arrival typically coincides with November 1, the start of Day of the Dead. According to traditional beliefs, this is because they contain the souls of the dead returning to their shrines for the celebration.

Again, if you’ve ever seen Day of the Dead altars, you know they look much more vibrant and festive than most grave shrines you might find in a typical U.S. cemetery. Often, Papel Picado helps to add color to these already colorful scenes.

Papel Picado is the colorful perforated paper hanging on and over Day of the Dead altars. It’s significant for two reasons. One, because it’s perforated, the paper naturally contains numerous holes. Some believe these holes serve as gateways for souls visiting their shrines.

The paper is also very fragile. This symbolizes life’s fragility. Once again, many Day of the  Dead altars serve as reminders that death can come at any time.

Numerous Day of the Dead altars also include candles. They serve the same symbolic purpose as marigolds, helping souls find their way to the altars.

Some Day of the Dead altars feature small models or figurines of dogs. This is tied to the belief that dogs help souls find their way to their resting place.

Just as candles and marigolds help attract them to the world of the living, dogs help them return to the afterlife.

Anyone who has the opportunity to see an authentic Day of the Dead shrine up close should make sure they do so. When you approach the altar, you may discover that the experience is multisensory.

Day of the Dead altars clearly look attractive and impressive. That said, people also commonly add incense to them, resulting in a noticeable scent. They believe incense helps to facilitate communication between the world of the living and the world of the dead.

In many ways, the Day of the Dead represents Catholic beliefs.

For example, Day of the Dead altars often include lanterns hung towards the top of the shrine. These lanterns represent the Star of Bethlehem. The Star of Bethlehem guided the Wise Men to witness the birth of Jesus, and the lantern guides visiting souls back to their resting place.

Although many people associate Day of the Dead symbols with Catholic iconography, you should still remember that they can have multiple meanings.

Cultures and traditions develop and change over the years. The significance of a symbol doesn’t need to remain the same forever, nor does it need to have the same meaning for every person.

Consider the example of a white cross. You’ll find a cross of slaked lime drawn on the ground beneath many Day of the Dead altars. Naturally, people include this symbol as a representation of the Christian cross.

That said, people also used to draw white crosses to symbolize the four cardinal directions. This provided the souls of the dead yet another means of finding their way back to the afterlife.

Yet again, this blending of life and death is the core of many Day of the Dead traditions. While we may enjoy being alive, we must remember it is not a permanent experience.

The Power of Tradition

Day of the Dead is much more than a celebration featuring bright colors and inventive costumes. These types of celebrations can help someone remember a family member who has passed on. They can make us feel more comfortable with the idea of our own deaths. Perhaps most importantly for some, they use our shared cultural experiences to help us confront the inevitability of death in a positive and communal way.