Día de Los Muertos, or Day of the Dead, is one of the world’s most well-known rituals involving death. For two days after Halloween, participants in Mexico and some other South and Central American countries celebrate life by paying tribute to those who have passed on.

You may not have participated in a Day of the Dead celebration, but there’s a good chance you’ve at least seen pictures of one. You also likely noticed that many Day of the Dead altars and activities feature prominent use of flowers.

Some of the more common types of Day of the Dead flowers include marigolds, baby's breath, coxcombs, chrysanthemums, white hoary stock, and gladioluses. Whether you’re interested in making your own Day of the Dead altar one day, or you simply want to know more about Day of the Dead symbols, this guide will help you better understand the topic. 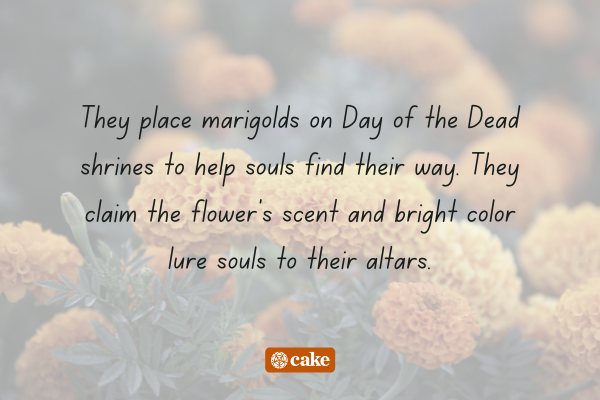 Traditional Day of the Dead beliefs include the idea that the souls of the dead will return to the world of the living during the holiday. Thus, they place marigolds on Day of the Dead shrines to help these souls find their way. They claim the flower’s scent and bright color lure souls to their altars.

However, the marigold’s role in Day of the Dead celebrations is so significant that many people also use paper marigolds when designing displays and participating in other Day of the Dead activities. They want to ensure the colorful effect is as striking as possible.

When they don’t have enough natural marigolds on hand, they supplement their displays with artificial ones.

(Don’t assume it would be impossible to run out of flowers. Leading up to one Day of the Dead celebration, a family in Mexico sold out their stock of marigolds, selling a whopping 300,000 in a mere three days. Yes, that’s how important the marigold is. Demand for marigolds when Day of the Dead approaches is so high that growing marigolds is the family’s primary business. Every year, they strive to increase production by 20 percent.)

Additionally, some people don’t merely limit the marigold’s presence to Day of the Dead altars. They might also create a path leading to the altar with the petals. This is to provide the souls of the dead with a bright path they can follow.

You might also see some women dressed as skeletons and dancing during Day of the Dead celebrations. Often, they’ll wear crowns made from marigolds.

Of course, people also use marigolds (and have for many years) for very practical reasons. Finding these flowers in Mexico during the time of year that Day of the Dead takes place is relatively easy. That’s another major reason they’ve been very prominent in Day of the Dead celebrations.

It’s worth noting that not every flower someone might include in a Day of the Dead altar has special significance. In some instances, people use flowers simply for their visual effect.

Consider the example of baby’s breath. People often include this flower because its delicate qualities complement the bright, dynamic qualities of marigolds and other common Day of the Dead flowers.

You’ll actually find that baby’s breath serves a similar role in many other types of floral arrangements. Its subtle appearance enhances the other flowers around it without distracting from them. Just an extra tip to keep in mind if you’re ever designing a floral arrangement.

Cockscomb is another colorful flower Day of the Dead shrines often include. This is another instance in which people choose a flower because of its appearance. Cockscomb is beautiful and bright, adding to the effect the traditional marigolds already create.

This emphasis on color and vibrance plays a major role in Day of the Dead celebrations. It’s no coincidence that Day of the Dead altars are visually stunning. People who celebrate the holiday don’t treat it as a somber occasion.

Instead, Day of the Dead serves as a celebration of life. That’s why it’s so colorful. Instead of dreary altars, those participating in the festivities use the most gorgeous flowers they can find to create altars that embody the day’s true meaning.

That said, some people associate cockscomb’s natural red color with the blood of Christ. Thus, they might include it in a Day of the Dead altar for religious purposes as well. 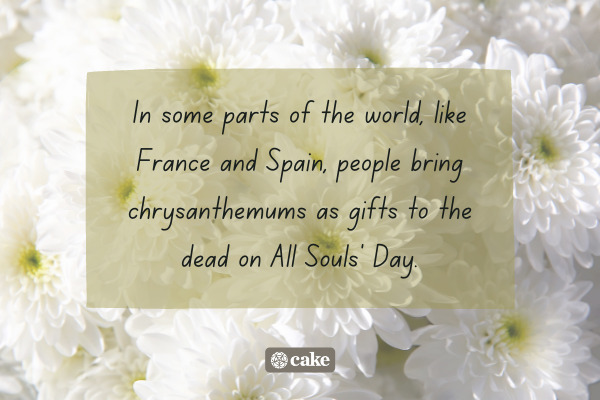 Day of the Dead is by no means the only world holiday that involves remembering and celebrating those who have passed on. Many cultures have similar celebrations.

Knowing that, it may come as no surprise that their traditions often overlap. For instance, in some parts of the world, like France and Spain, people bring chrysanthemums as gifts to the dead on All Souls’ Day.

As the example above indicates, not all Day of the Dead flowers are necessarily colorful. For instance, along with chrysanthemums, Day of the Dead altars may also feature white hoary stock.

You might wonder why they would opt for the white version of this flower. Hoary stock comes in many other colors, including red, purple, and blue. During a celebration that places so much emphasis on vibrant colors, why would someone decorate a shrine with the white version?

Essentially, people typically use this flower in altars when they want to remember a child who has passed on. They associate the white color with the innocence of a child. The whiteness also has a calming quality that may be more appropriate for such an altar.

This highlights an important point. Although some people merely consider the visual appeal of traditional flowers when decorating Day of the Dead altars, others choose specific types of flowers based on the people they are remembering.

Someone who hasn’t lost a child is thus less likely to use white hoary stock than someone who has. Quite simply, people often modify certain details of Day of the Dead rituals based on their specific life experiences and beliefs.

The gladiolus is an example of such a flower. It often appears on Day of the Dead shrines and ofrendas because many cultures associate it with remembrance. Thus, if you wanted to honor the life of someone you loved, you might want to include it. In fact, many people use this flower in funeral arrangements as well.

The shape of this flower lends itself to these uses. Thanks to its long stalk, the gladiolus stands out, helping enhance a display in much the same way baby’s breath might.

Flowers and Day of the Dead: A Millenia-Old Tradition

Like sugar skulls and other popular symbols, Day of the Dead flowers play an important part in the celebrations. Some may guide the souls of the dead back to our world. Some may simply look beautiful. All, however, have long been a significant part of this fascinating cultural ritual.

Want to learn more about Day of the Dead? Read our guide on how it's celebrated at Noche de Altares in Santa Ana, CA.