The Day of the Dead (el Día de los Muertos), is a Latin American holiday in which families welcome the souls of their deceased relatives back for a short reunion.

You can find plenty of celebration, food, and drink during this joyous occasion.

Origins of Day of the Dead 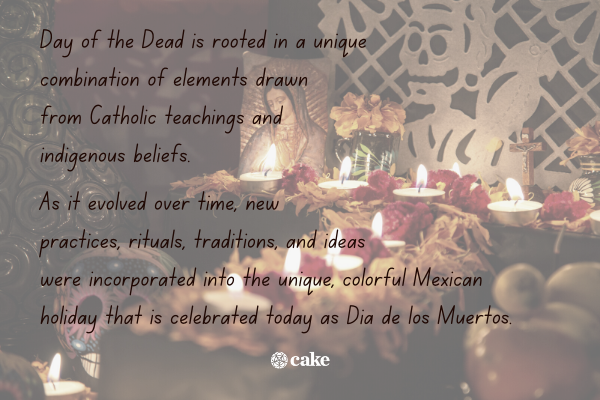 Day of the Dead history includes a blend of religion, Mesoamerican ritual, and Spanish culture, and is celebrated every year from October 31 to November 2. Day of the Dead is an essential holiday in Mexico that honors and celebrates deceased loved ones.

Day of the Dead is rooted in a unique combination of elements drawn from Catholic teachings and indigenous beliefs. As it evolved over time, new practices, rituals, traditions, and ideas were incorporated into the unique, colorful Mexican holiday that is celebrated today as Día de los Muertos.

The roots of the Day of the Dead celebration go back to the rituals honoring the dead in pre-Columbian Mesoamerica 3,000 years ago. Upon death, a person was believed to travel to Chicunamictlán, or the Land of the Dead.

Nahua tradition believes that a person’s soul can only reach Mictlán, or the final resting place, after getting through nine challenging levels and a journey of several years. Family members provide food, water, and tools to help the deceased in this difficult journey.

Similarly, people leave food and other offerings on the graves of their loved ones or set them out on ofrendas (makeshift altars) in their homes for their deceased relatives to feast on and enjoy while visiting.

Day of the Dead vs. All Souls’ Day

You might think Day of the Dead is the same as Halloween, but these are actually two distinct and unique celebrations.

Pagan celebrations of the dead in ancient Europe consisted of feasting, dancing, and bonfires. Even after the rise of the Roman Catholic Church, some of these customs survived, which the church unofficially adopted into All Saints’ Day and All Souls’ Day.

People in medieval Spain brought pan de ánimas (spirit bread) and wine to the graves of their loved ones. To help the dead souls find their way back to their homes on Earth, they would also cover graves with lit candles and flowers. Spanish conquistadors brought these traditions with them to the New World in the 16th century.

You can still see many of these Day of the Dead symbols and traditions still practiced today. Family members go to graveyards where their loved ones are buried. They clean the graves and decorate them with food and flowers. The most famous aspect of Día de los Muertos is the sugar skull, or the calavera.

All Souls’ Day, by contrast, is a day that Roman Catholics observe to remember deceased loved ones in a solemn manner. It is about praying for the souls of the departed who are in purgatory and is not a time for dressing up, music, or leaving offerings of food at graves.

If you are baptized in the Roman Catholic tradition, you die with the guilt of lesser sins on your soul. Roman Catholics pray for the departed on November 2 so that their souls can be cleansed of the lesser sins and ready to meet God. Flowers can be placed at the deceased’s graves and prayers are said for them.

How Day of the Dead is Celebrated Today 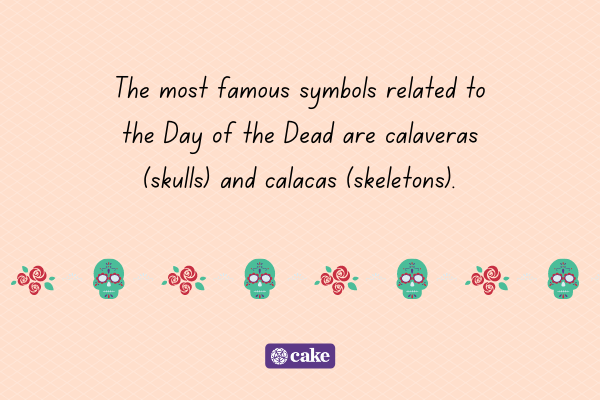 Living family members treat the deceased as honored guests and leave their favorite foods and other offerings on the ofrendas built in their homes or at their graves. Ofrendas are often decorated with candles and flowers including native red cock’s combs and bright orange marigolds, both flowers of the dead and thought to help spirits find their way back to earth and to their families.

It’s believed that spirits first visit the graves where they were buried, so altars are often set up near the gravesites. If they are set up at a family’s home, flower petals are laid to form a path from the gravesite to the home so the spirits can find their way.

In some communities, families will spend the entire night in the cemetery beside the graves of their loved ones. Even in the cemetery, the day and night include music, laughter, conversation, food, and remembering the loved ones who have gone on before them.

Drinks and plates of fruit, food, and pan de muerto are said to give the spirits of the dead the strength to make the journey back to the spirit world. It’s said that the spirits remove the “essence” of the food and drink after they eat so altar food is no longer good the next day.

One of the most popular foods of the holiday is sugar candy molded into the shape of skulls. These “sugar skulls” are brightly decorated to match the colorful holiday and placed on the altar for the deceased to enjoy.

The living feast on traditional dishes such as tamales, flan, chalupas, and churros, as well as atole, an ancient corn-based drink spiced with cinnamon and vanilla.

The most famous symbols related to the Day of the Dead are calaveras (skulls) and calacas (skeletons). The printer and cartoonist José Guadalupe Posada re-envisioned Mictecacíhuatl, the Aztec goddess of the underworld, into a female skeleton known now as the most recognizable Day of the Dead icon — la Calavera Catrina.

Women and girls often paint their faces to look like La Catrina or wear skull masks during the festivities and celebrations.

El Día de los Muertos is a happy, festive, joyous holiday. As such, it’s perfectly acceptable to greet someone by saying, “Feliz Día de los Muertos,” or “Happy Day of the Dead.” This greeting is often called out to complete strangers as families pass by each other on the way to the cemetery or the family altar.

You may want to bring a beautiful array of Day of the Dead flowers to be included on the altar or the grave of loved ones if you’re visiting a family who is celebrating. This is especially meaningful if you knew the person and can help the family decorate before the celebrations begin.

Numerous countries celebrate Día de los Muertos and some might surprise you! This celebration has rapidly grown in popularity and continues to each year.

You can find people that celebrate this holiday all around the world, including Ecuador, Guatemala, the Philippines, Haiti, El Salvador, Brazil, Spain, Ireland, India, and Mexico. Thousands of people celebrate this day in the United States as well.

The Beauty of the Día de los Muertos

Day of the Dead celebrates the lives of the deceased with parties, food, drink, and activities that the dead enjoyed while they were living. Día de los Muertos acknowledges death as a natural, integral part of the human experience — as normal and natural as birth, childhood, adulthood, and marriage. During this celebratory day, the dead are awakened from eternal sleep by the ones they love so they can share, celebrate, and reconnect.

Want to learn more about Day of the Dead? Read our guide on how it's celebrated at Noche de Altares in Santa Ana, CA.