Ever heard of “gallows humor?” This dark sense of what’s funny comes is displayed in one Día de los Muertos tradition, the short satirical poems called Calaveritas, or “little skulls.” It’s a popular tradition to write versions of these short poems each year around the Day of the Dead.

These poems originated from famous printmaker and artist José Guadalupe Posada, who published intricately-designed skeleton illustrations in a newspaper. Each skull was designed in the likeness of a famous politician or prominent person and was accompanied by a satirical poem. The poems were silly, including jokes about subjects’ character, their limited abilities in death, and the powers and leisures they can no longer enjoy.

Many of the most famous Calaveritas are written by Posada himself, but as his format caught on, a variety of short Day of the Dead poems emerged. Enjoy this selection prepared for you below. They go great with a tasty sugar skull treat!

Most excerpts are loosely translated from the Spanish by this article’s author. 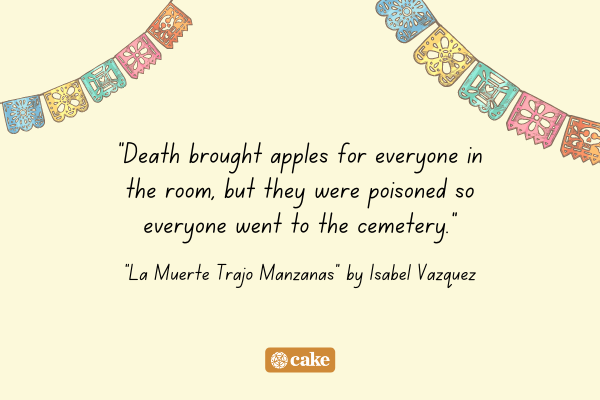 “Death brought apples for everyone in the room, but they were poisoned so everyone went to the cemetery.”

Isabel Vazquez’s silly poem jokes that Death, like a person, came and poisoned a whole party. If your friends and family aren’t sure how to get started writing their own Calaveritas poems, consider reading this and other Calaveritas to get inspired.

“The most hateful critic finds himself compliant
When hearing guitars which are really quite giant.”

This poem talks about a world with very large guitars and how musicians would cope with playing them. Over the top imagery or silly magic keeps the poems from getting too dark or somber, even when many of them reference death.

“In this special month, in which everything is party and dance, we remember with love, traditions, and praises.”

Martínez’s poem, less silly and more informative and formal, talks about the meaning of the Day of the Dead and how important it is to remember ancestors. Not every poem has to take a silly angle on death, and some of them are downright beautiful depictions of what Day of the Dead means.

“This handsome skull is from a great bullfighter. He came to preside over the festival of Cuatro Dedos…”

One of Posada’s famed drawings shows a proud and boastful bullfighter and makes fun of how pompous he is about his own abilities and importance. More so than regular people, Posada’s illustrations and poems tend to mock those who are full of themselves.

“Here lies a good bullfighter, who died of grief, from being a bad banderillero, booed at each performance.”

A different take on the bullfighter idea, this poem takes a funnier tactic. Poems that make fun of someone for dying of shame or grief, which aren’t really ways that someone can die, are common in this satirical kind of writing.

If you’re writing Day of the Dead poems, try starting with the imaginative prompt, “If [celebrity/politician/public figure] died of a particular emotion, what would it be?”

6. "Through the Eyes of the Soul" by Xayacamachan

“Be as happy as you can, oh king Tecayehyatzin; You who appreciates the jewels that flourish!
Will we live again? Your heart knows this: We only live once!”

This old example focuses on mortality, as usual. No matter how much wealth someone has, they still die, which is just the kind of humor that these poems use to laugh at death.

If you’re trying to write a Day of the Dead poem, consider a lesson about mortality or living life to the fullest.

“Here is Don Juan Tenorio, who is always notorious, and even though today he’s a skull, no one is slobbering over him.”

Posada focused his critiques on people in power, painting them in silly light rather than serious political critique. While this poem sounds odd in English, remember that most of these poems have a sing-songy rhyme to them in Spanish.

“Xochitl likes to accelerate the quota that death has completed…”

Topiltzin’s poem tells the story of a group of (alive!) friends goofing off together around Día de los Muertos. Full of inside jokes and localized humor, these poems are most fun for a small group to write and read together.

“It’s sad to see the things because of how much everything has changed, but it’s even sadder to see that they’ve all forgotten about me.”

Written from the perspective of a dead person looking back on Earth, Vazquez’s poem mentions what the supposed-ghost notices about how people went on with life without them.

“Female solidarity, whether dead or alive!” Said la catrina, taking her beau, “It’s easier to cry together than it is to deal with this jerk!”

Posada’s portrayal of “la Catrina” is dramatic. Here she swears off men in dramatic fashion, preferring the company of lady skeletons. These Catrina skeletons have become a very famous Day of the Dead symbol, one of Posada’s lasting legacies.

“How tasty are the enchiladas, from my small town of Rayón, though sometimes I get confused, and I no longer know where they’re from.”

This poem, like others, talks about the trials and tribulations of being dead and walking the Earth as a skeleton. In this case, the skeleton remembers how good the enchiladas are but has a bad memory for places.

12. "The Skeleton of the People’s Editor" by José Guadalupe Posada 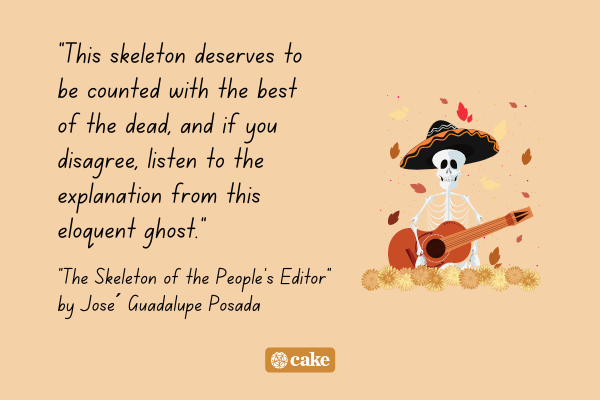 “This skeleton deserves to be counted with the best of the dead, and if you disagree, listen to the explanation from this eloquent ghost.”

Posada was very loyal to his editor and wrote a goofy yet sweet poem to his editor from the perspective of another dead character. As always, Posada is imaginative in both the artwork that accompanies the poem and with the poems themselves.

Celebrating Day of the Dead with Calaveritas

Like limericks entertain in Irish culture, Calaveritas allow people to poke fun at the fears many of us have about death. They help us to take the idea of death in stride, since the whole idea of Día de los Muertos is a day of remembrance and connection with those we’ve lost.

A night of fun poem writing and reading, especially if the poems tease your friends and present company, is a great preamble to an All Saints Day of caring for cemeteries where those we love lay to rest.

Remembering that we will also die can bring new life into our days. It can help us appreciate what we have and strive to be prepared and live up to our ideals. Day of the Dead is just one good reminder that we can honor the past while also planning for our futures. Want resources for making an end-of-life plan? Cake has what you need.