You might recognize pumpkins, black cats, candy corn, and witches as symbols of an American holiday known as Halloween. But do you know all of the symbols associated with the Latin American holiday, Día de los Muertos?

The “Day of the Dead” might seem similar to Halloween in many ways, but it’s a very different type of holiday with its own symbology, rituals, and traditions. Here, we’ll go over the most popular Day of the Dead symbols and colors, and let you know what it all means.

6 Day of the Dead Symbols and Their Meaning 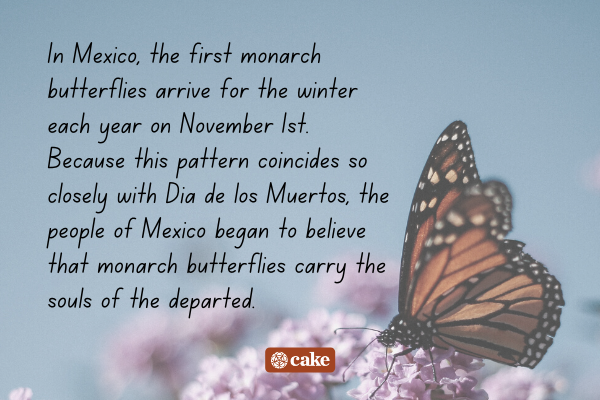 Día de los Muertos takes place on November 2 of every year. The holiday originated in ancient Mexico and northern Central America, amongst indigenous groups like the Aztec, Maya, and Toltec.

When the Spanish arrived to the area, the rituals associated with the Day of the Dead became intermingled with new traditions. The two Spanish holidays of All Saints’ Day and All Soul’s Day lent even more symbology and tradition to the date.

The symbols below are all associated with the holiday known as Day of the Dead as it’s celebrated today.

The ofrenda is the central component of any Day of the Dead celebration, and it’s one of the holiday’s most recognized symbols.

Ofrenda refers to the offerings which are laid out on a temporary altar during the Day of the Dead celebrations. These altars serve as places for families to honor their loved ones. The ofrenda features pictures of the deceased, as well as items that belonged to them.

During the celebration, family members bring items to the ofrenda that will help the deceased along their journey.

As mentioned above, paper banners known as papel picado can be seen at any Día de los Muertos celebration.

The banners often feature carefully-cut patterns to represent departed loved ones. They represent wind and serve as a reminder of the fragility of life.

Many people worldwide are familiar with sugar skulls, which are another of the most recognized Day of the Dead symbols.

To those who are unfamiliar with Día de los Muertos symbology, a skull might seem like a morbid gift.

But the brightly-decorated calaveras de azucar, or sugar skulls, instead act as a lighthearted reminder of life’s cyclical nature. Families often leave sugar skulls on the ofrenda of children who have passed.

Hand-crafted skeletons, or calacas, also take center-stage at most Día de los Muertos celebrations. The skeletons are funny and friendly, rather than scary. Families traditionally dress the skeletons to represent their departed loved ones.

Monarch butterflies are a common Day of the Dead symbol, and you’ll often spot decorative butterflies taking center stage on many altars.

Flowers play a central role at most Día de los Muertos celebrations. They decorate most of the altars and serve as part of an ofrenda. Some flowers have meanings that are specific to their color or variety.

A flower that’s orange or yellow in color, known as cempasuchil, represents the sun, love, and the shortness of life.

Families often craft wreaths of flowers to place on their loved ones’ graves.

You might wonder why you often see hand-crafted skeletal dogs decorating the altars and graves at Día de los Muertos celebrations.

Dogs are an important symbol in Day of the Dead culture since they’ve long been thought to guide ancestral spirits to their final resting place.

7 Day of the Dead Colors and Their Symbolism 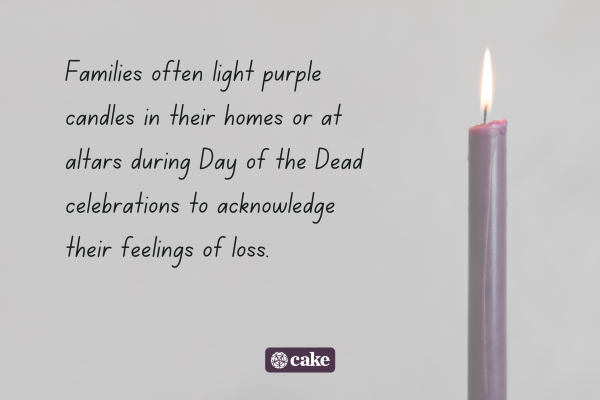 Día de los Muertos is one of the most colorful celebrations you’ll find, in Latin America or worldwide. But not every color holds the same meaning when it comes to the Day of the Dead.

A few select colors, listed below, represent key aspects of the holiday. These are the colors that you’ll see decorating Day of the Dead festivities and altars most often.

The color yellow represents light. According to ancient Aztec tradition, light is what guides the spirit of the departed along its journey. During Día de los Muertos, it’s common for celebrants to leave trails of yellow marigold flower petals to guide their loved ones’ spirits towards the ofrenda.

The color orange is similar to yellow in symbolism but slightly more specific. Rather than representing the concept of light, the color orange is symbolic of the sun. The Mexican marigold flower also appears in orange variants, which families use to “light” the way for departed family members towards their altars.

You can also spot the color orange around a Day of the Dead celebration in the form of painted or hand-crafted monarch butterflies.

The color black is a pre-Columbian symbol that references the Kingdom of the Dead, Mictlan. Black symbolizes death at modern Día de los Muertos celebrations, but it can also be used to accentuate and highlight brighter colors.

The color white represents the sky, hope, purity, and innocence. It also represents the belief that a soul gets a clean start, or a blank slate, after death.

Celebrants often bring white flowers to the altar or use white paper banners and other decorations.

Pink represents the joyous qualities of the Day of the Dead celebration. It creates an air of celebration and positivity. You can often observe pink as a primary color on costumes, decorations, and dresses.

Pink also celebrates the belief that family members will one day reunite with their departed loved ones.

As a counterpoint to the color pink, purple represents pain, grief, and suffering. The symbolism of purple is a later influence of Catholicism, wherein purple symbolizes sadness and mourning.

Families often light purple candles in their homes or at altars during Day of the Dead celebrations to acknowledge their feelings of loss.

Day of the Dead Symbolism

The Day of the Dead is a time for celebrants to remember departed loved ones with positivity and festivity. Instead of a day of mourning, Día de los Muertos helps communities maintain a healthy relationship with death and overcome fears of the afterlife. Unlike acknowledgments of death in many other cultures, Día de los Muertos is unique in its festive and uplifting spirit.

It’s important to keep in mind that Day of the Dead symbolism can differ from community to community. While one community might hold strong Christian or Catholic beliefs, another might not. And that difference will have a big impact on how they view certain traditions, colorful symbols, and more.

But the symbols and colors described above are the generally-accepted versions of Day of the Dead symbols, and how most communities view them. So the next time you encounter a Day of the Dead celebration, you’ll be able to pick out the specific symbols and representations you might not have noticed before.