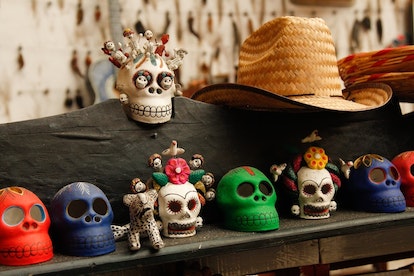 Day of the Dead or Dia de los Muertos is a holiday celebrated mostly in Latin America. The tradition honors the dead through festivals, celebrations, and other ceremonies. Combining both local indigenous rituals with Catholicism, this is a unique way to pay tribute to deceased ancestors.

The way people deal with death in different cultures doesn’t always look the same. In places like the United States, we see death as a somber, sad affair. In Latin America, the opposite is true. Death is accepted as a part of life, and the souls of those we love are never that far away.

In this guide, we’ll explore the infamous Day of the Dead celebration to see how people in this part of the world remember a family member with fun and excitement.

What is Day of the Dead and Why is it Celebrated?

The history behind the Day of the Dead is steeped in religion, tradition, and culture. In many ways, this holiday is a way for families to overcome feelings of sadness while coming together.

The history of Day of the Dead goes back thousands of years to the Aztec empire. The Aztecs and other indigenous people lived in what's now central Mexico, and they considered death a normal part of life.

When people of this culture died, they were believed to travel to Chicunamictlan, the Land of the Dead. They’d continue through nine levels of challenges until they reached their final resting place, and the entire process took years.

In August of each year, these ancient people performed different rituals honoring their dead. Family members gift food, water, and other tools as a way to help their ancestors complete their journey to their final resting place. Today, this tradition of leaving offerings for the dead is still common.

This yearly celebration isn’t limited to the Aztec tradition. In ancient Europe, pagans celebrated at the same time of year in honor of the changing seasons. They’d dance, feast, and light bonfires. The Catholic religion adopted this holiday as All Saints’ Day and All Souls' Day, which are celebrated on the first two days of November.

To celebrate, people in Spain brought wine and bread to their loved one’s graves on All Souls Day. Spanish explorers brought these Catholic holidays and traditions to the New World, and Day of the Dead was born.

While Day of the Dead spread throughout most of Latin America, the largest celebrations are held in Mexico since this is where the tradition originated. However, it’s not unusual to see these celebrations throughout the world.

The similar tradition of All Souls’ Day is common in Europe and other parts of the world where Catholicism is a leading religion. In addition, this holiday is very popular in the United States within Mexican communities. The largest celebrations are in cities with large populations of Mexican Americans, including San Antonio, Los Angeles, San Diego, and Albuquerque.

When is the Day of the Dead?

The Day of the Dead falls on the same days every year. The entire celebration begins on October 31, also known as Halloween. This is also known as All Hallow’s Eve, and it’s the day when the doors between the human world and the spirit world open. November 1 is then All Saints Day, or the day to honor saints.

Finally, November 2  is All Souls Day or the Day of the Dead. This is when the largest celebrations take place in honor of deceased loved ones. However, these death-focused traditions are a large part of the entire three-day holiday.

Day of the Dead Traditions and Activities

As seen in Mexican funeral traditions, this is a culture built on the acceptance of death. Day of the Dead is a time to remember the dead, and to welcome their spirits back into your life and home.

Parades are one of the most well-known parts of Day of the Dead. These are the pictures most often seen online, and they’re easy to recognize. Thousands of people crowd the streets of Mexico City, progressing in their skull face paint and colorful outfits.

This parade is known as the Catrina parade or skull parade. Music, singing, and dancing are all a large part of the procession. It’s a giant celebration of death through life, and it’s a spectacular sight to witness.

While this parade tradition is mainly located in Mexico City, there are similar parades held in all corners of the globe, especially the United States.

One of the biggest traditions for Day of the Dead is visiting the gravesite. The family visits the grave, pulls weeds, cleans debris, and decorates the gravesite. This is a small way to honor the dead and show respect to one’s ancestors.

Unlike in the United States, most graves in Mexico are publicly owned or are under the ownership of the church. As such, it’s expected for the families of the deceased to maintain the graves.

The family leaves candles, flowers, and the favorite foods of the deceased on the grave as a form of offering. In some parts of Mexico, it’s common to offer alcohol and salt as well. These visits are often very long. The family will visit, eat, sing, and tell stories about their ancestors. This truly is a family event, and it’s common to see lively parties in cemeteries.

In other parts of the world like the United States, visiting the grave might not be possible. People adapted the tradition to suit their needs. In this case, many people use at-home altars or community altars to honor their dead without needing to visit the actual grave.

Families build altars in their homes in honor of the dead. While these are most common for those who aren’t able to visit the graves of their family members, many people choose to create their own at-home altars. They are sometimes built right at the gravesite.

These are sometimes complex constructions, taking months to build. These altars are piled high with ofrendas or offerings to the dead. Family members offer candles, flowers, personal possessions, and other special things in honor of their ancestors.

Sugar skulls and other popular imagery

You’ve likely seen sugar skulls in stores near you, and they’ve become a year-round visual in many parts of the world. However, this term and image actually come from the Day of the Dead festivities. It’s one of the most iconic symbols of this festival and also Mexico in general.

Family members make these skulls or buy them to place them on the altar of loved ones. They’re made of sugar, but they can also be made of chocolate and other sweet treats. This is where they get the name. Traditionally, families use icing to write the name of a deceased family member on the head of the skull.

Another popular symbol of the Day of the Dead is Calacas. These are colorful skeleton figurines you’ve likely also seen before, though they’re not as recognizable as sugar skulls. During Day of the Dead, you’ll find these just about everywhere. Some are simple, while others are dressed in traditional Mexican styles.

Like most celebrations in Mexico, there’s a huge focus on food and drink. While traditional Mexican cuisine is a staple of this holiday, you’ll also find special treats just for this time of year.

Aside from sugar skulls, most people eat pan de muerto. While the name might imply this is a sinister snack, it’s really a delicious orange-flavored sweet bread.

Other than pan de muerto, local regions have their own favorites like tamales, churros, mole, enchiladas, and other candies. It’s also common to drink mojitos, tequila, and other fun cocktails. It’s all about enjoying the best of the party with friends and family.

Last but not least, this is a time for storytelling. One of the most loved customs is to share stories and memories of the deceased. These stories are usually upbeat or humorous in nature since it’s believed they would have wanted to be remembered cheerfully.

Because most families do their storytelling intimately, this isn’t something as widely shared about Day of the Dead, it dates back to the oral storytelling tradition in Mexico. If you’re going to a Day of the Dead party, be sure to bring lots of stories of your own.

Take Part in a Festival of Death

Of all of Mexican’s holidays and events, Day of the Dead is the most well-known. These symbols of vibrant skulls and exciting graveyards are recognized across the globe. As more and more people look into the history and tradition of Day of the Dead, more people begin to think openly about their own deceased loved ones and relationship with death.

This tradition shows the importance of celebrating the best of life while also not shying away from death. Living life to the fullest means knowing how to make hard decisions about the future. Start end-of-life planning today to prepare for your future, whatever it may bring.